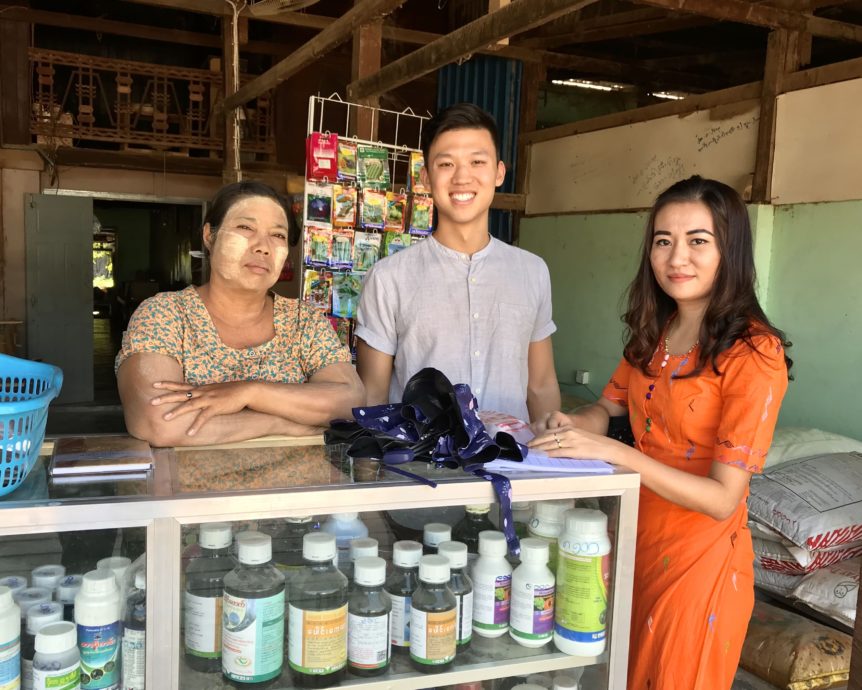 (Above: Leland Hunger Fellow Michael Wang (middle) and a colleague from the IFPRI Myanmar team posing with a woman who manages a pesticide retail shop in Sagaing Region, Myanmar. Decision-making on household enterprises is a key part of Michael’s research on women’s empowerment in agriculture. Image courtesy of Michael Wang.)

In the past ten years, Myanmar has been undergoing a process of political and economic liberalization that is dramatically transforming the nation’s economy and society. Within this time, poverty in Myanmar has declined rapidly and standards of living have improved with average household spending increasing and new livelihood opportunities emerging. However, Myanmar’s agricultural sector, which makes up about 30% of the country’s gross domestic product (GDP) and employs most of the population, has failed to experience such rapid growth. 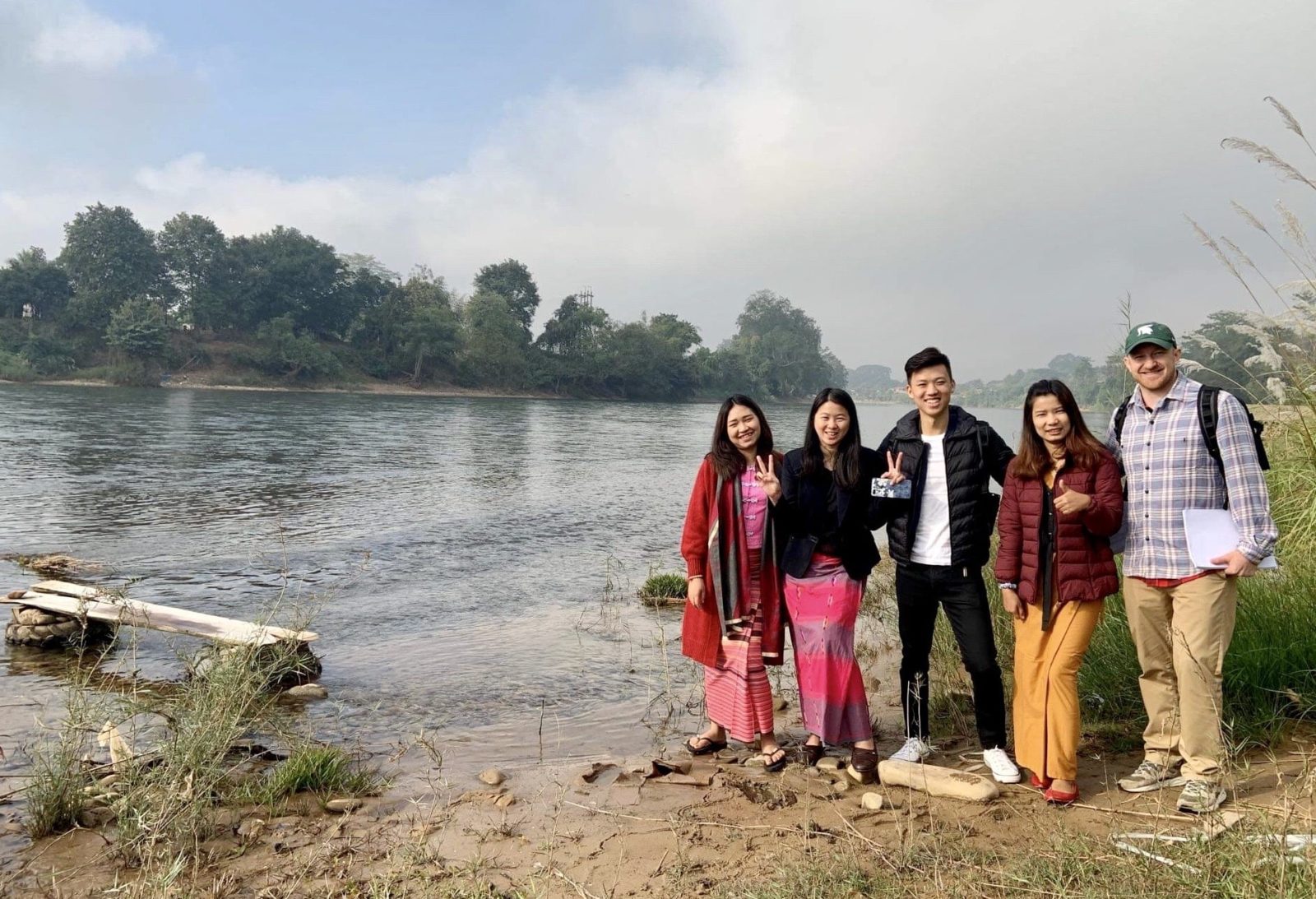 “What kinds of vaccinations do you give your cattle? In the last seven days, have you eaten butter bean? What is the soil type of the rice paddies behind your home? How does your cousin send you money from his construction job in Thailand?” It’s eight o’clock on a blazing hot Wednesday morning in Ayeyarwady Region, Myanmar. I’m half-sitting, half-squatting next to a pair of dozing, greyish-brown water oxen on a stubby pink plastic stool with a faded image of Doraemon on its seat. In front of me, a middle-aged man squatting on a stubby yellow plastic stool with a faded image of Sailor Moon on its seat closes his eyes for a moment to ponder the questions. The man pulls out a wad of betel nut from his pocket which he promptly tosses into his mouth as he begins to use his finger to draw the layout of his rice paddies in the dirt. “Who in the household is the primary decision-maker for harvesting the two-acre rice paddy” asks Nang Lun Kham Synt, my co-worker from Shan State who is squatting next to me on a stubby lime-green plastic stool absent of any faded image of nostalgic Japanese anime. After a few seconds, the man again closes his eyes and reaches for another wad of betel nut from his pocket as he contemplates the question.

The questions asked by Nang Lun Kham Synt represent just a few topics included in our household survey, which aims to gather information on rural livelihoods in Myanmar. Reliable data is a basic requirement for effective design and monitoring of policies and outcomes, but the availability of reliable data on agriculture and rural livelihoods in Myanmar is severely limited. To address this, my office, the recently-established Myanmar branch of the International Food Policy Research Institute (IFPRI), is working with Michigan State University and the United States Agency for International Development (USAID) to implement the Feed the Future Myanmar Agriculture Policy Support Activity. Under this project, we are designing and conducting a regionally representative household survey on agricultural production, livelihoods, and nutrition throughout Myanmar. Additionally, the survey is incorporating measures of women’s empowerment to help diagnose areas of disempowerment and design inclusive development programs. By establishing the foundations and database for long-term agricultural growth and building the capacity of key stakeholders to prioritize and implement agricultural policy reforms, our IFPRI Myanmar team aims to support the Myanmar government in a time of rapid transition.

As a former high school teacher with a Master’s Degree in Public Health, and the youngest member of our IFPRI team, I will admit that prior to the start of my Leland Hunger Fellowship, I knew little of the agricultural content in our survey. I had zero knowledge of draft animal raising (unless you consider my Pomeranian a draft animal), I had no talent when it comes to identifying soil types, and I had only a mediocre understanding of the differences between lowland and upland crops. However, what I did have was a passion for reducing food insecurity and health inequities. Previously, as a teacher recruited to China’s underserved rural schools, I expected to work towards closing a rural-urban educational achievement gap. I did not expect to encounter the pressure of food insecurity that forced my students to trade schoolwork for farm work, the contaminated water sources that resulted in my students falling ill, or the smog of mass coal burning to warm homes, which produced a choking haze that permeated my classrooms. I quickly realized recruiting teachers to the countryside was but a temporary Band-Aid solution to deeper development issues that kept my students out of school. As a teacher, I was exposed to the limitations of viewing development work as different sectors siloed within arbitrary definitions such as education or health. Education is tied to health, which is tied to nutrition, which is tied to water sanitation and agriculture. 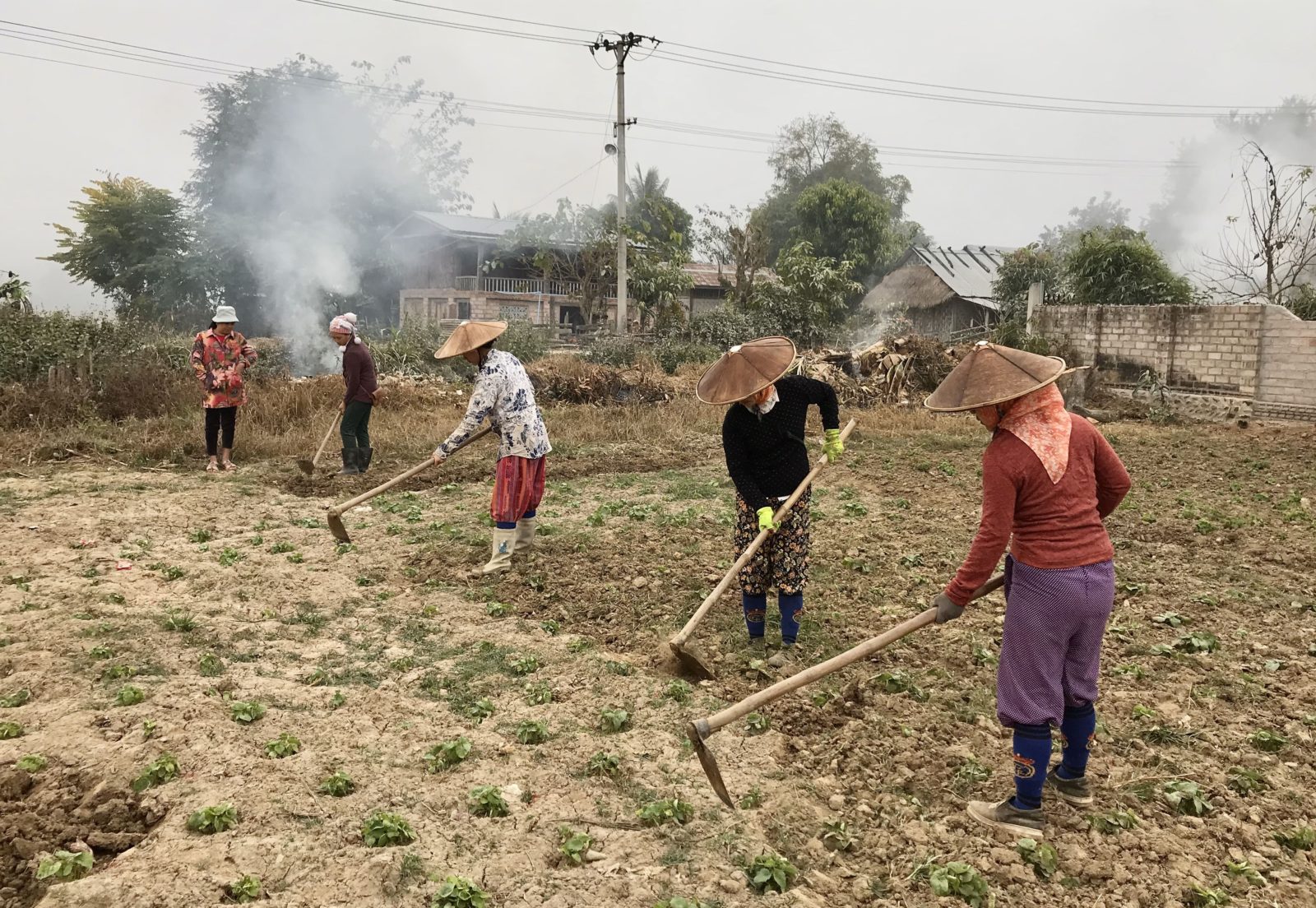 Now, as a researcher with IFPRI, I can connect my experiences in China with the realities of rural households in Myanmar. Moreover, I can do so with an amazing support community: both my Leland Fellow cohort and my teammates here in Myanmar. Whether it’s when my co-workers are shoving extra scoops of rice into my lunch bowl as they explain to me the differences between drip and sprinkler irrigation or when they are sharing with me their views on leadership, accountability, and impactful foreign assistance after our evening survey debrief meetings in the field, my IFPRI team has shepherded me through my first months in Myanmar as I’ve grown from an infant who knew nothing of soil types to a toddler who can confidently (and sometimes accurately) declare a pile of dirt as clay loam.

Evident in how my Myanmar teammates engage with village households, there is an underlying value of prioritizing community leadership to enact not only sustainable and equitable change, but also effective and personalized development. Sometimes, these values are emphasized in high-level budget discussions with the US Agency for International Development. Sometimes, these values are emphasized in conversations with rice paddy farmers as we all squat on stubby pink plastic stools with faded images of Doraemon or Sailor Moon. In either case, my experiences thus far with Leland and IFPRI in Myanmar can be described as a learning process of how development can be made impactful and inclusive through community ownership and leadership.