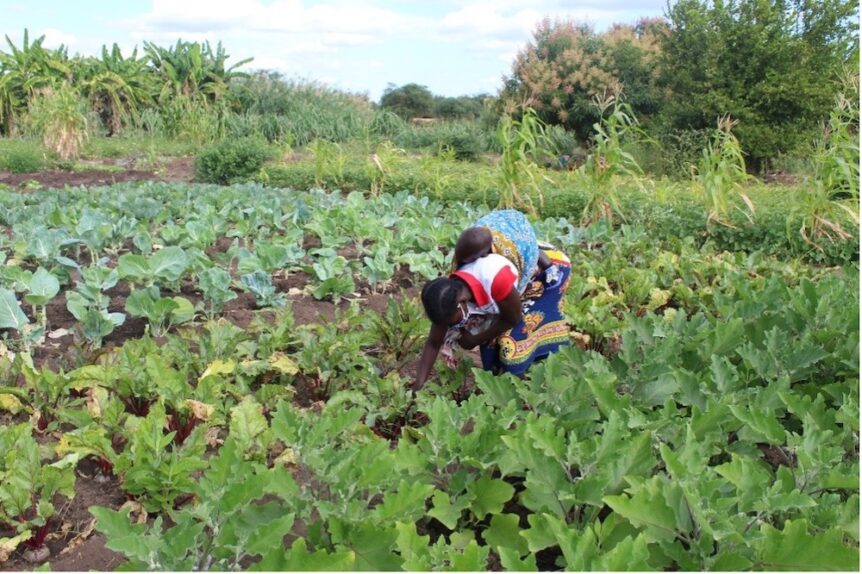 Seeds are life. For as long as humans have cultivated crops, we have freely saved, stored, traded, and passed down the seeds which we deemed best for feeding ourselves and future generations. Seed saving and exchange are ancient practices, over 10,000 years old, reflecting the vast diversity of human cultures, foods, wisdom and ways of existing in tune with Planet Earth. Indigenous and peasant farmers, typically referred to as smallholder farmers, are key actors in the movements for food sovereignty, poverty eradication, climate resilience, and preservation of biocultural diversity within food systems. Yet today many farmers find their livelihoods threatened by climate shocks, extractive agricultural activities, and harmful policies.

There are approximately 382,000 known plant species on our planet, of which around 6,000 are actively cultivated for food. Of those just nine species account for over two-thirds of global crop production: cassava, maize (corn), palm-oil fruit, potatoes, rice, soybeans, sugar beet, sugar cane, and wheat. According to the United Nations, 75 percent of crop diversity has been lost over the past century, the impacts of which include reduced soil health and fertility, reduced nutrient cycling and density, nutrient depletion, homogenization of food, and poor adaptation to climate change.

Plant genetic resources for food and agriculture (PGRFA) refers to the diversity of seed and plant material of traditional varieties and modern cultivars. These resources are used as clothing, energy, feed for domestic animals, fibers, food, and shelter. As stated by the Food and Agriculture Organization (FAO), PGRFAs are necessary to ensure crop adaptation, address environmental challenges, and withstand climate shocks.

In addition to material benefits, seed saving has cultural benefits and spiritual significance. Seeds carry stories of where a group of people have been and how they have lived. For example, quinoa (kinwa or kinuwa in Quechua) is of deep importance to indigenous peoples of the Andean region (Bolivia, Colombia Ecuador, Peru and parts of Venezuela). More than a trendy superfood, it reflects the resistance of native people in the face of violent colonialism and is referred to by its stewards as the “Mother of Grains.” To lose access to and ownership over such an ancient grain would be a loss on multiple levels. 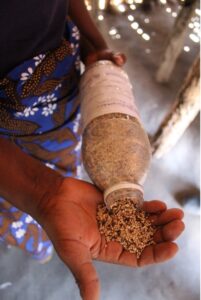 In this example and others, the framework of food sovereignty exists to recognize the intrinsic autonomy that indigenous and peasant farmers have to control and direct their natural resources. It can be a helpful counterpoint to the logic of intellectual property, which is often used to rob indigenous people of collectively held knowledge. To engage deeper with this framework, I recommend this podcast featuring Dakota scholar Diane Wilson, author of The Seed Keeper and director of the Native American Food Sovereignty Alliance.

Genetic modification, punitive seed laws, claims over intellectual property, processed foods, and heavily industrialized food systems threaten biodiversity and the sovereignty of peasant farmers around the globe, who are responsible for feeding 70 percent of the world population. So why do some organizations promote the use of genetically modified, or “improved,” seeds? Who stands to benefit from the propagation of inorganic seeds? These are questions I have asked myself throughout the first year of my fellowship, having witnessed the provision of so-called “improved seeds” to the farmers who are beneficiaries of our project. In this first year of my placement, I have been working with a cross-sectoral project called GTNS (Gender Transformative Nutrition Sensitive), which works with households in Chemba district, Sofala province, Mozambique where pregnant and lactating women are present. The multifaceted project provides household assets, food assistance, and learning sessions on various topics including preventing post-harvest loss, malaria prevention and treatment, and promotes community debates regarding gender roles. Part of this work includes distributing seeds to farmers to support their ability to grow nutritive food to feed themselves and their families. The seeds we provide are the improved seeds I mentioned earlier.

The main argument used for the promotion of genetically modified seeds is that they produce a higher crop yield in a shorter amount of time, theoretically producing maximum food with minimal input for poor and threatened people. For people facing hunger, this can seem like a blessing. Our beneficiaries have seen huge gains as a result of using genetically modified seeds, both in terms of individual plant size and overall crop yields.

A parent with multiple mouths to feed will see this as a major benefit and cannot be blamed for doing what they can to provide for their children. Knowing what we do about the importance of healthy nutrition for children, especially in the first 1,000 days (or two years) of life, we cannot deny access to foods that will help children’s brains and bodies develop as they should. The same is true for pregnant and lactating people, who require diverse and robust levels of nutrients to grow their babies in the womb, feed them once born and maintain their own health throughout both processes. Furthermore, some genetically modified seeds have been developed to be more resistant to droughts and pests, reducing the need for water and pesticides, whether natural or artificial. For farmers with little income, this can make a big difference in their input toward maintaining their farm and contribute to savings over time. In a region with poor access to water, such as Sofala province, this benefit cannot be ignored.

However, while GMO seeds tend to produce higher crop yields, they also outgrow other crops grown with non-GMO seeds, resulting in reduced use of non-GMO seeds. These commodity seed systems contribute to the homogenization of seeds, thus reducing biodiversity over time and making crops more vulnerable to harsh conditions. As biodiversity is reduced so too is resilience and a plant’s ability to adapt to harsh conditions. In a world with an actively changing climate, it is of utmost importance that rural farmers, most drastically impacted by climate disasters, can prepare for and withstand such shocks.

The main purpose of commodity seeds is to make profits and produce as much food as possible. This leaves no room for the cultural and biological benefits of seed conservation. Our beneficiaries come from long lineages of farmers, and have shown me the unique crops they have grown over generations. While visiting Chemba in February I ate a white watermelon for the first time in my life, a crop that our beneficiaries grow easily because of how well it has adapted to the inconsistent rains in the region. However, these seeds have minimal market value and thus are not encouraged by agriculture projects. 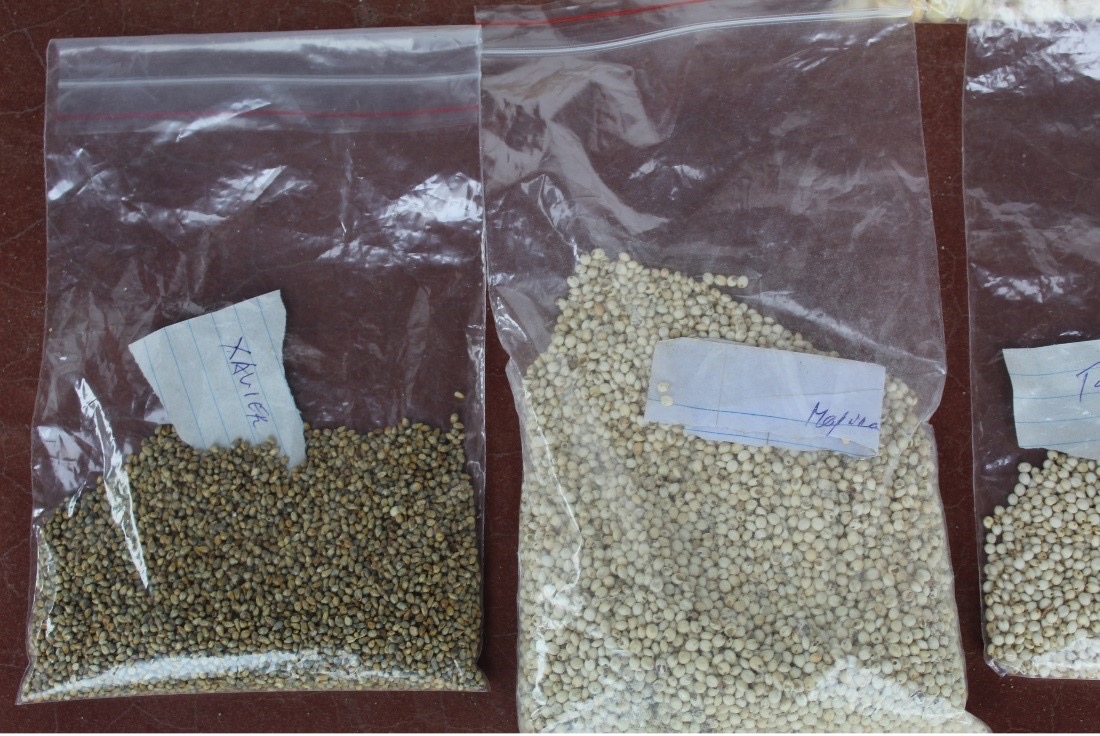 Preserved millet seeds from the 2021 harvest in Xavier and Mapira, Mozambique. 📸: Onyịnye Alheri.

The right to seed has been affirmed and codified in the United Nations Declaration on the Rights of Peasants and Other People Working in Rural Areas (UNDROP), officially adopted in 2018. This legal document grants peasant and rural workers protection over their conservation activities and identifies peasant rights as inalienable human rights and makes explicit the rights of rural people to “maintain, control, protect and develop their own seeds and traditional knowledge,” and clarifying states’ obligation to “take appropriate measures to support peasant seed systems and promote the use of peasant seeds and agrobiodiversity.”

In 1991, the International Convention for the Protection of New Varieties of Plants came into effect. Three years later the World Trade Organization (WTO) enacted their Trade-Related Aspects of Intellectual Property Rights (TRIPS). Both doctrines incentivized the creation of genetically modified seeds and encouraged European nations to start promoting an intellectual property framework that prioritized ownership and enterprise over stewardship and community care. An increasing number of nations, especially on the African continent, are facing conflicting obligations between international legal mandates and the rights of peasant farmers who are at the core of their agricultural systems.

There are several international conventions that ensure farmers’ rights, including the Treaty on Plant Genetic Resources for Food and Agriculture (Art. 9), the UN Declaration on the Rights of Indigenous Peoples (Art. 31), the UN Declaration on the Rights of Peasants and Other People Working in Rural Areas (Art. 19) and the International Covenant on Economic, Social and Cultural Rights (ICESCR) Article 11. These protections establish the human right to adequate food and nutrition, as well as the right to access the means of crop production. Such laws entrust the protection of peasant and indigenous farmers rights to the State, giving nations and government bodies authority over their application. While noble, this does not guarantee effective implementation in practice.

Though strongly worded, these legal clauses mean little if efforts are not taken to implement them. Thus, it is essential that governments ratify and adopt such legislation, making them priorities in their strategic planning and administration. Indigenous people must also be allowed to actively participate in decision-making on matters relating to plant genetic materials. In addition, and perhaps more importantly than government structures, groups including collectives, non-governmental organizations, and civil society agencies can work to create and uphold structures such as community seed banks and libraries to ensure the preservation and exchange of seed varieties. Such practices allow peasant and indigenous farmers to acquire seeds at lower costs than through vendors, ensuring their sovereignty and increasing their access to a large diversity of locally adapted seeds.

For people living in the northern hemisphere, which serves as the core determinant of the food market, you can support crop diversity by eating seasonally. Have you ever questioned why a person living in the northern U.S. would be able to purchase and consume bananas in winter? This is due to a globalized food system in which demands of western consumers influence the growth choices of farmers in the global south. Such unreasonable demands cause farmers to grow a limited variety of crops, or crops that are not native to their lands, such as Ugandan farmers choosing to grow Hass avocados in order to compete in the export market. Seemingly harmless, western demands can have negative consequences on non-western environments. The small but significant action of eating locally can have a globally beneficial impact.

The importance of a seed cannot be understated. No living creature on earth would exist without seeds. It is vital that we protect and cultivate as many healthy varieties as we can in order to ensure not only our survival but also culture, sovereignty and overall wellbeing.