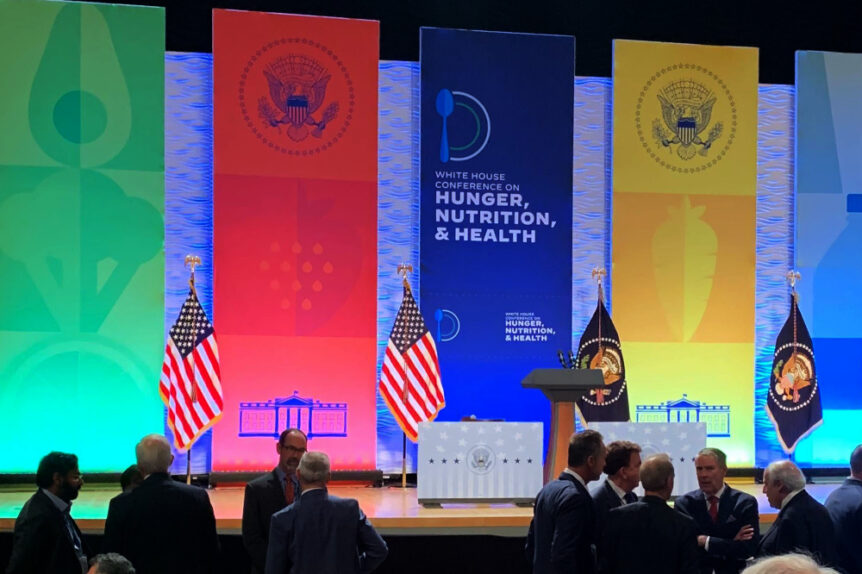 The stage at the White House Conference on Hunger, Nutrition, and Health at the Ronald Reagan Building, Washington, D.C. 📸: Shannon Maynard

Of the many initiatives, perspectives, and goals introduced yesterday morning in the plenary hall of the White House Conference on Hunger, Nutrition, and Health, the most important statement may have been the shortest.

“We can do this,” said President Biden, and I believe he means it.

As does our Board Chair, Rep. James P. McGovern, who has been working tirelessly for years with his colleagues in Congress to make the issue of food insecurity a national priority.

As do the hundreds of advocates, volunteers, and state, local, and federal government employees who gathered in that hall to bring our individual and collective contributions to the new national strategy for ending hunger in the U.S. by 2030.

As do the tens of thousands of Americans watching around the country, regular volunteers at the local food pantry, or regular clients at the same pantry, or both; all wondering how they can be involved in this new national effort.

We can do this. We can reach our goal of a hunger-free America by 2030. And the National Strategy, guided by input and feedback from countless advocates, organizers, experts, and everyday people, lays out the roadmap for how it will happen.

There are many ideas to applaud in the new strategy. Making expansions to the Child Tax Credit and EITC permanent would be a tremendous step toward reducing food insecurity and poverty in the United States.

Likewise, proposed upgrades to SNAP like expanding eligibility to underserved populations, reducing time limits, and in particular making it easier for college students to access the program, will make this essential program an even stronger first line of defense against food insecurity.

We applaud the official language supporting food sovereignty for Tribal communities, and the commitment to addressing the systemic discrimination and inequalities in how the U.S. Government works with Indigenous communities.

Hearing the President speak, and reading through the national strategy document afterward, I was struck by how many of the proposed best practices and scalable solutions have been pioneered at the local level, fueled by the determination and passion of people who did not stand by, but got involved when their communities needed them. And I reflected on how so many of our Bill Emerson National Hunger Fellows and alums have been contributing to ambitious pilot programs or research that have led us to this list of solutions today.

It has been some time since I was a Hunger Fellow, placed with Red River Valley Community Action in Grand Forks, North Dakota. That experience opened doors for me that I couldn’t have imagined before, as it has done for so many participants in our programs in the years since. The seeds sown in our programs’ first years are sprouting, as more and more of our program participants with the passion and vision to end hunger are taking on positions of influence in nonprofits, corporations, government, and philanthropy.

We stand by our bold commitments to training a new generation of leaders, learners, and advocates who will lead us toward an equitable future where no one goes hungry. Year after year, cohort after cohort, we will build the movement to end hunger, and we’re not nearly ready to slow down. We can do this.

As we’ve said before, leadership matters. Whether this ambitious national strategy takes on a life beyond the printed page is now up to all of us—a whole-of-government, whole-of-society, bipartisan effort. What’s clear is that no-one can stand on the sidelines: as the President said, “whether it’s been your life’s work, or you’re just getting started,” there is room at the table for your talent, your expertise, and your passion in this movement.

We hope you join us in our work in the weeks, months, and years to come, so that in 2030 we can celebrate the hunger-free world that we have created together.