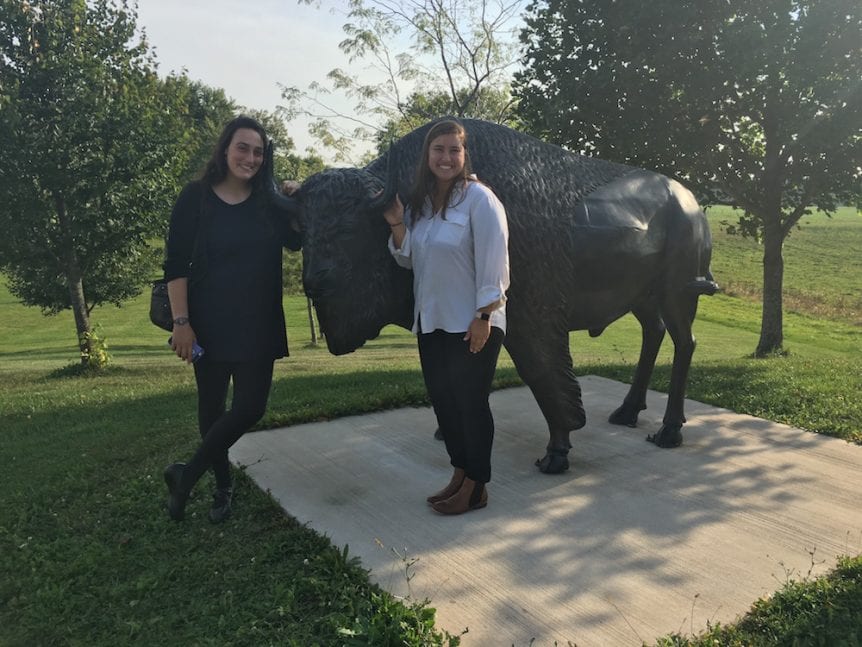 Above: Hunger Fellows Sarah Goldman (left) and Corey Malone-Smolla pose with a statue of a bison on the Oneida reservation near Green Bay, Wisconsin

Fayetteville, Arkansas, is the home of the University Arkansas School of Law; for the past six months, it’s also been the home of Emerson National Hunger Fellows Corey Malone-Smolla and Sarah Goldman, the first two Hunger Fellows to serve in the Razorback State. Their work at their field site placement with the Indigenous Food and Agriculture Initiative, while based in Fayetteville, has taken them out of the state to collaborate with communities across Indian Country1. Read on to hear how Corey and Sarah have adjusted to their new home, as well as what work they’re doing to improve food security for Native populations across the country.

Like most people who grow up in a small southern town, you often dream of going nowhere but everywhere. The place I grew up in Virginia was the kind of place where the doctor who delivered you was also your rec basketball coach and the parent of your first grade crush. Social events took place in the parking lots of churches and everyone was someone’s cousin. I decided to go north for college, and after a while, a funny thing happened. The small town culture I often mocked, I now craved. As someone who rejected country music growing up, I found myself needing the twang from time to time. I even bought my first pair of cowboy boots. So it makes sense that after my brief separation from the South, that land called me back home. Sort of.

For my field site placement, I work at the Indigenous Food and Agriculture Initiative at Arkansas School of Law in Fayetteville, AR. The Initiative’s mission is to bolster health and wellness in Indian Country through strategic planning, technical assistance, and youth development. By empowering Native producers, ranchers, farmers, and businesses, the Initiative supports diversified economic development and honors traditional knowledge and culture. Along with a team of lawyers at the Initiative, I work on the Model Food and Agriculture Code Project, authoring a section on approaches to anti-hunger work through legislation. The project provides model codes and law on issues relating to food and agriculture for tribal governments to review, adopt, and implement. These codes will support and facilitate agricultural and economic development and improve health outcomes in Indian Country. In my section, I provide examples of how a tribe may structure and implement laws intended to increase food security in their nation, including model bills tribal governments can adapt for their own nations.

Our field placement is unique, because the communities we serve are spread out across the country, in some cases far from the community where we live. For example, there are no federally recognized tribes in Arkansas or Native reservations, but some Tribes’ ancestral lands span across Arkansas. Additionally, Native Americans spread far and wide throughout this continent, making Arkansas central to many of these peoples. The staff and attorneys that work at the Initiative travel often to all corners of this land and Sarah and I have been fortunate enough to travel to Wisconsin and Nevada to convene with Native producers, entrepreneurs, and leaders. On the Oneida reservation in Green Bay, we visited the Community Integrated Food Systems where we learned from expert Native producers how they practice food sovereignty through innovations in their orchards, cannery, and bison farm. I tasted blue corn mush and fell in love, picked fresh apples, and waved to bison reclining in the hot autumn sun. In Milwaukee, Native youth educated us on how the Farm Bill affects their tribe and Native activists and leaders shared perspectives on policy issues ranging from education to health systems.

My supervisor often reminds me that resilience and potential present themselves as important themes in all of these conferences on Native Food Systems. While historical trauma of racialized displacement policies create numerous obstacles in Indian Country, ranging from high rates of food insecurity, obesity, and diabetes, the focus of this work is to highlight the successes and achievements already taking place and to fortify the voices of resilience and power to continue the work for generations.

This dance between a traumatic past and a hopeful future resembles what it’s like to live back in Arkansas. Much like the conversations taking place in Indian Country, the south blends a complicated history of racial violence with the fire of resilient people who value joy and companionship. This state has welcomed Sarah and me with so much warmth. Strangers have invited us to their country homes, filling our bellies with homemade cornbread and our souls with camaraderie. Yet, among this collegial warmth, specks of hate in the form of bumper stickers and flags remind us that there’s still work to be done.

I now know that growing up, I struggled with the same parts of the South that many people do: its history of slavery and a legacy of systemic oppression. Yet, someone once told me that when you paint the South in a simplistic light, as backwards or wrong, you ignore the history of so many people who fought for rights and progress. I now know that when I left the South, I missed that spirit so often erased: the nurturing soul and culture of joy, a dedication to create intentional spaces of community and togetherness; The idea of sitting on porches in late august surrounded by sweating glasses of lemonade and the din of guitar chords. However, it is also worth noting that the South is not monolithic, so while I can relate to many parts of Arkansas culture, there’s still so much that is unique and new.

For the most part, life in Arkansas moves with a classic southern pace, slow like a drawl, but with intentionality and meaning. There’s always work to be done, tough conversations to be had over steaming bowls of chili, and the reminder that a past informs the future, but does not define it. 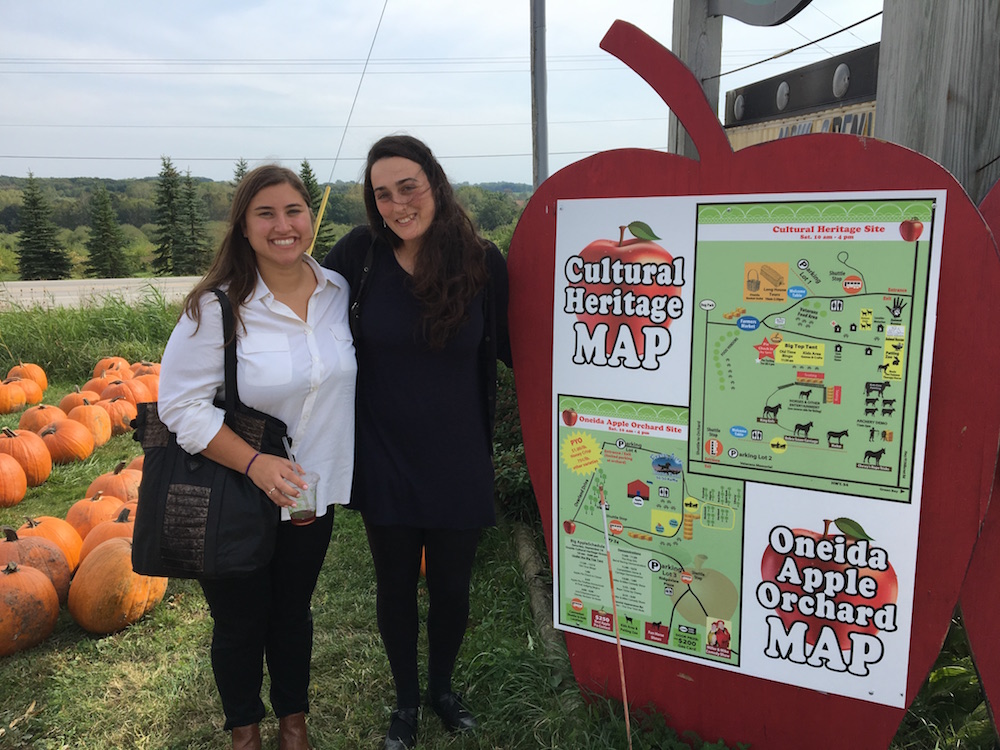 I am a young girl raised in Connecticut on challah French Toast. I am full of conviction but unusually quiet, hands perpetually digging in the dirt. I am proudly child number two of four (a five-year window from top to bottom), raised in a home with a sign on the door that reads “Welcome to the Zoo.” I am a traveler—I came of age playing El Burro on my saxophone in Nicaragua, my host Mom smiling and repeating “felicidades, Sarita.” I am an activist, a community organizer, a farmer, and a friend. And at 23 years old, I find myself sitting on the steps of the Wellstone House of Activism and Organizing in Northfield, MN, hands a little bit shaky, repeating to myself: “Fayetteville, Arkansas. Now that’s a place I haven’t heard of before.” But it is a place that I now call home.

My placement is with the Indigenous Food and Agriculture Initiative (IFAI), an Initiative based in the University of Arkansas School of Law. I work closely with the Policy Director, analyzing how proposed changes in the Farm Bill will impact Indian Country producers, food assistance providers, and food assistance beneficiaries. My research centers on the topics of agricultural production in Indian Country, federal monetary support to Native producers, and participation levels in the Supplemental Nutrition Assistance Program and the Food Distribution Program on Indian Reservations programs for the 567 federally-recognized Tribal Nations. The end product of my research will be eleven one-page infographic fact sheets covering the importance of the Farm Bill programs, agricultural production, and U.S. Department of Agriculture (USDA) support provided to Native Producers throughout the country, to be shared with Tribal leaders and Tribal organizations.

While Native Producers have received increased support over the years through the founding of the Office of Tribal Relations (located in the Office of the Secretary at USDA), and through legal challenges such as the Keepseagle settlements, so much work remains to be done. Through my research, I have found that Native American producers in every region of the country received less monetary support than the average of all farms in these areas.

Almost every day at work I am reminded that Native American communities have a unique history and legal standing in the federal policy realm. As sovereign governments, federally-recognized Tribes have the right to engage with the Federal Government through a government-to-government relationship.

As my supervisor explained to me, IFAI empowers Tribal Governments, farmers, ranchers, and food businesses by providing them the legal framework, analysis, research, and training they need to grow their operations, and by improving access to other resources, support, and education.

As a visitor to Fayetteville, I too occupy a unique space—as neither a student nor staff member at the University, as a temporary resident, and as a northerner in a southern town; and I worried before I arrived that I would feel like an outsider.

I had never been to Arkansas before I started my field placement, but as a northerner, I was familiar with the negative stereotypes of the South. The experience of meeting so many talented and passionate individuals at IFAI has made me reflect on the well-known speech by Chimamanda Ngozi Adichie titled “The danger of a single story,” which we watched during field training for the Emerson Program. Adichie’s powerful message has become all the more powerful during my time in Fayetteville. Adichie argues that when we define individuals by a single narrative, we strip individuals of their humanity, emphasizing “how we are different rather than how we are similar.” The stigmatizing single narrative of Arkansans to which too many in the North subscribe would have prevented me from seeing our similarities: our commitment to ending hunger in the community we serve.

Southern hospitality and charm has felt like an open embrace, and a place of many firsts for me, a place of shared humanity. I attended my first college football game in Fayetteville, learned how to call the hogs with a whooping “Woo-pig-sooie.” I’ve spent my Saturday morning strumming Bluegrass banjo tunes and delighting in a post-performance high with a group of elementary school students after performing Jingle Bells at the studio’s Christmas Recital. I’ve delighted in a full belly with friends after indulging in fried foods in a variety of different forms, from pickles to pie.

As Adichie states, “when we reject the single story, when we realize that there is never a single story about any place, we regain a kind of paradise.” I’m starting to find my little slice of paradise in the most uncommon of all places for a northern gal: Fayetteville, Arkansas.