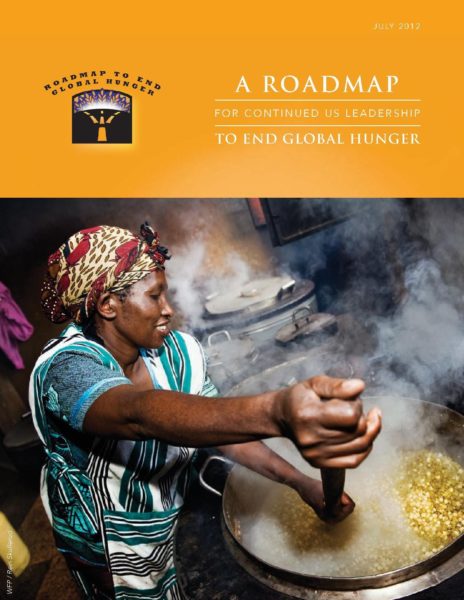 The Roadmap for Continued US Leadership to End Global Hunger reviews progress over the last three years toward the goals set out in the original Roadmap, and offers recommendations to ensure continued effectiveness of US global food security programs.

Hunger remains one of the world’s most pressing challenges, with almost a billion people — or one in seven worldwide — suffering chronic hunger. In addition, each year up to 100 million more people may face acute hunger brought on by natural disasters and conflicts. Women and children are disproportionately affected by hunger and malnutrition. With population growth placing a strain on a limited natural resource base, and changing weather patterns creating more droughts and floods, feeding the world of the future presents a serious challenge.

Addressing hunger and malnutrition is the right thing to do. For decades, the US has been the moral leader around the globe in responding to humanitarian crises and development needs in order to make a difference in the lives of our world’s most vulnerable people. These investments generate significant good will.

Addressing hunger and malnutrition is a smart investment. Investments in nutrition programs can bring returns on investment as high as 138 to 1. By contrast, malnutrition costs individuals up to 10 percent of lifetime earnings and may cost countries up to 11 percent of their gross domestic product in lost productivity. Reducing hunger and increasing the economic well-being of people in the developing world — where 95 percent of consumers live — helps to create more prosperous and stable markets for US goods and services.

Addressing hunger and malnutrition is critical to national and global security. In the wake of the food price spikes in 2008-2009, riots broke out in almost 40 countries around the world. Volatile food prices and compromised access to food have led to social unrest, particularly in global security hotspots such as the Middle East and North Africa. It is critical to both our national and global security that the international community helps developing countries better manage destabilizing events like volatile food prices and natural disasters.

The American people support smart investments in alleviating hunger and malnutrition. Public opinion polls show consistent support from the vast majority of people in the US for programs to end hunger and assist poor people around the world in their efforts to reach self-sufficiency.