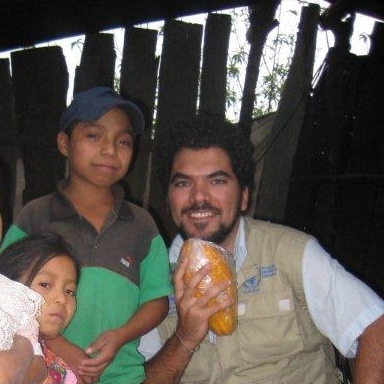 Carlos Centeno worked as an International Program Officer at WFP Guatemala where he was the co-manager of the European Union Extraordinary Program to Support Food and Nutritional Security. He managed relations with the European Delegation as well as WFP counterparts in Brussels. Carlos coordinated the program directly with the Food and Agriculture Organization as well as all field work operations for the Purchase for Progress component benefitting 4,000 small farmers and the Food for Work scheme benefitting 8,000 families in four departments of Guatemala. He developed proposals with the management team (Emergency Operation, Central Emergency Response Fund, European Union Food Facility) and worked in coordination with the Office for the Coordination of Humanitarian Affairs (OCHA) and WFP heading the Country Office’s Situation Reports and Executive Briefs. He coordinated Executive Briefs for WFP’s Executive Director for her interaction with Guatemalan government representatives. Carlos also led the Country Office’s Communication Strategy with international donors during the 2009 Emergency Operation and United Nations Flash Appeal together with the UN Resident Coordinator’s Office.

Carlos Centeno worked as a Program Officer in the Prevention and Recovery unit of the Program Division at WFP, where he provided analysis and research on Food for Assets (Food for Work, Food for Training, etc.) programs. His work focused on the implications of food assistance in the resolution or prevention of armed conflict, including resilience patterns, social dynamics and how different food assistance modalities (cash transfers, vouchers, food) empower civilians to overcome roadblocks to their development. The research findings informed the development of a new livelihoods policy to guide WFP country offices and regional bureaus.

Carlos also served on various Project Review Committees that review and propose improvements to WFP program design and implementation. In this capacity, he was part of the PRC for the Haiti Emergency Operation budget revision, the Ecuadorian cash and vouchers pilot program, and the Central American Regional protracted relief and recovery operation.

Carlos Centeno worked as a consultant with the African Bureau of the United Nations Development Program in New York City and with the Center for International Conflict Resolution at Columbia University. Carlos also worked as a consultant on the first-ever American Human Development Report and as an associate for Athgo International for Symposia at the World Bank and the UN. In 2005, he served as a volunteer with the World Food Program in Bolivia where he organized a food security census for the city of La Paz. Carlos’ research interests included analyzing the correlation between environmental degradation and sustainable agriculture depletion as a catalyst for violent conflict in the Middle East, Africa, and Latin America. Carlos also wrote for several publications including Songlines Magazine, where he published a column on conflict, politics, and music. Carlos graduated from the University of Kansas with a BA in Journalism and a MA in International Relations, with a focus on public policy in Latin America. Born in Kansas to Venezuelan parents, he has traveled extensively in Latin America.

Policies for Successful U.S. Foreign Aid in the Gaza Strip