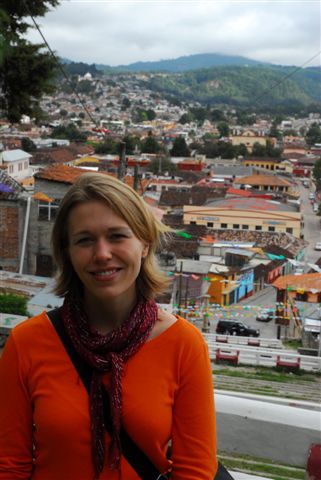 In her field placement, Alder worked in the Impacts, Targeting, and Assessment Unit of the International Maize and Wheat Improvement Center. Broadly, her job was to research the relationship(s) among maize biodiversity, agricultural policy, and markets in Mexico. These topics include a strong poverty and livelihoods focus, given that maize diversity in Mexico is maintained primarily by poor, small-scale farmers. There were two field sites for this work: Chiapas, where research dealt with the conditions created for small-scale maize farming by agricultural and rural development policy; and the State of Mexico, where the goal was to explore the extent to which maize landraces are accepted in local value chains. Outputs of her field placement included several peer-reviewed articles. Alder also produced a 100-page report on maize value chains in the State of Mexicoto help guide CIMMYT maize breeding for the region.

Alder’s work in her policy-year at the Food and Agriculture Organization in Rome continued to address crop diversity and markets. In addition to finishing the writing projects from her placement at CIMMYT, she assisted in editing a book reporting a 5-country study on crop-diversity and markets, and helped to organize a conference on the potential for local seed markets to contribute to agricultural development in Africa.

Alder was previously a Fox International Fellow at the Colegio de Mexico in Mexico City where she studied the relationship between NAFTA and native maize genetic diversity. She earned a joint Master’s degree in Environmental Science and International Relations with a Certificate in Development Studies from Yale University in 2006. Her area of concentration was “Biodiversity, Food Security, & Development in Latin America.” Alder has traveled extensively in Latin America, Europe, and Australia, and speaks Portuguese, Spanish, and some French. She is originally from the apple-growing region of Washington State.