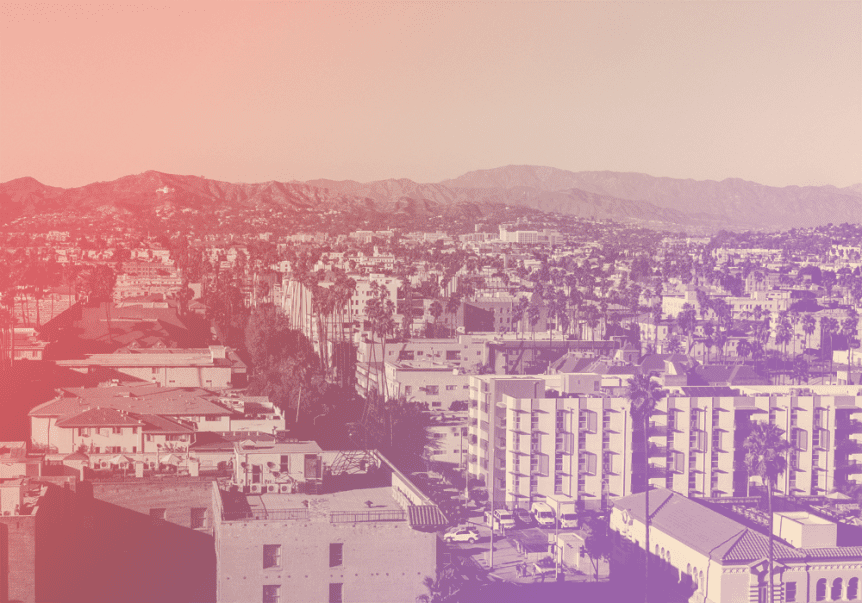 Concluding our series of field site spotlights for the 23rd Class of Emerson National Hunger Fellows, we turn our attention to Los Angeles, California, where NaShawn Johnson and Ray Chen worked with The L.A. Kitchen and Los Angeles Community Action Network.

A year ago, if someone would have asked me what comes to mind when I think of Los Angeles, my answer would have included beaches, palm trees and movie stars. While my answer may still include those three telltale markers of the City of Angels, I am proud to say that after my six-month placement with L.A. Kitchen, my vision of Los Angeles also includes the importance of fresh food access and the fight to alleviate senior hunger. Prior to my field site placement as an Emerson National Hunger Fellow, I had never even been to the West Coast, let alone Los Angeles, so I had no idea what was in store for me. What I soon realized during my time at L.A. Kitchen was that their organization was like nothing I had ever seen before. The work that takes place there is best described through their mission that “neither food nor people should ever go to waste.” This was made clear immediately upon arrival.

One of the largest objectives of L.A. Kitchen is to provide high-quality, fresh-made meals to places that serve senior populations and much of my work during my time there centered on this. However, this was not my first time working with the senior population. When I was in high school, I volunteered at a local senior center, and in my first year of college, I participated in a pre-orientation program that allowed me to volunteer with the Jewish Association for Serving the Aging where I met some of the most interesting seniors across New York City. I think I’ve always recognized that older adults play a very critical role in the social fabric of society.  In many cultures, older adults are seen as the gatekeepers of wisdom and life experience. Moreover, my interest in working with this community stems from the close relationship I have with my grandmothers.

One of my favorite aspects of working at L.A. Kitchen was how they never treated the seniors with whom they worked as helpless humans. They recognized that the senior community was made up of a variety of people from different walks of life and with various life experiences, and even if some seniors may require a bit more support, that does not disregard their autonomy. More importantly, no matter their social or economic background, each and every senior deserves access to healthy, sustaining foods so that they may live and thrive in their later years of life.

For L.A. Kitchen staff, it was important that the voices of the senior community of which they served was often heard and taken into account. One of the ways they ensured this was by regularly scheduling taste-testing focus groups with seniors from all of the meal sites to make sure that the food that they served was always at a high standard that was agreeable to the seniors. That commitment to always include their senior clients into the internal process made a huge difference.

During my time with L.A. Kitchen, I got to visit senior centers, talk to seniors in different parts of Los Angeles and get a better understanding of the limitations that stand in the way of food security for the older population. My work at L.A. Kitchen also exposed me to issues that I hadn’t even realized existed for some low-income seniors. I can recall one example when I volunteered to help seniors who received monthly food kits from the local food bank through the Commodity Supplemental Food Program (CSFP). For this particular site, which was a local community center, seniors were instructed to arrive at least an hour in advance to sign in. Altogether, about 130 seniors came that day to receive their food kits.  Another volunteer and I were to help the seniors carry the food kits to their cars—keep in mind that this program didn’t typically have any volunteers and so seniors were expected to carry these 60 to 70 pound kits to their car. Immediately I realized that this was not an easy feat for myself, let alone the clients. Quite a few of the seniors used mobility scooters or walkers which made carrying such heavy bags very difficult without the help of another person. There were some seniors who didn’t have transportation and whose only way of getting to and from the community center to receive their much-needed kit was by way of a friend or family member. I even helped to call a taxi for one woman whose first language was not English and waited with her to make sure the taxi driver knew where to take her.

All in all, that experience left me thankful that the CSFP is able to help so many people, but it also made clear that so much more could be done to maximize the experience for the clients who received the food kits such as factoring in the mobility and transportation limitations for clients. This experience taught me that while there are programs and policies that do a tremendous job of helping to alleviate hunger for people, there is always work to be done to make sure that such programs and policies are operating optimally. Had I not had that experience of working on the ground and seeing how the program worked firsthand, I probably would have not realized that such gaps exist. I think that speaks to the power and importance of the dual approach of combining community-based work with policy as it allows us to get a fuller picture.

I am excited to take all that I have learned throughout my time as an Emerson National Hunger Fellow into all of my future endeavors. One thing I am certain of—as I continue to develop my personal theory of change and work towards alleviating poverty and hunger for those who experience it, I know that I will always take into account the needs of the senior community and where they fit in the larger picture of making this world a more equitable place.  I have L.A. Kitchen to thank for that.

My name is Ray, and I worked with Los Angeles Community Action Network (LA CAN) for the past half year. It’s been an amazing experience to be working with staff and community members so committed to the liberation of oppressed people of all identities. The mission of the LA CAN is “to help people dealing with poverty create & discover opportunities, while serving as a vehicle to ensure we have voice, power & opinion in the decisions that are directly affecting us.”

LA CAN uses a community organizing approach that understands all of its activities as power-building for the community the organization interacts with. It has community service initiatives, such as its legal clinic; community improvement initiatives such as the pop-up organic market, which seeks to fill in gaps in the community; and lastly community organizing, which is the bulk of the power-building work the organization does. With LA CAN, my main project has been to work on a community food assessment of the Skid Row community to “systematically examine a broad range of community food issues and assets with the goal of contributing to recommendations and action that will make the community more secure.” I was also involved in other food justice campaigns, such as one to require all farmers markets in the city of Los Angeles to accept Electronic Benefit transfer, and another to create policies that protect and promote food-growing at public housing sites across Los Angeles.

While Skid Row is stereotyped as a community of transients, I have seen how powerful the people in the community are. LA CAN’s grassroots approach shines a beacon of hope that lights the way of action for our response to the political system that is failing our communities at the federal level.

LA CAN is at the front lines of combating two major trends that have huge detrimental impact on the Skid Row community: gentrification, and criminalization of the poor/unhoused. Though at first glance these trends do not seem to directly connected to food security, they actually have profound impacts. Through a series of surveys, individual interviews, and focus groups for the community food assessment, I narrowed in on four specific factors that intersect with food security: housing, health, income, and discrimination. For example, housing impacts food security on all levels. Residents live in a food desert and are thus constrained to corner stores. Many residents are also not able to store perishable foods or prepare foods due to houselessness or living in housing that is inadequately equipped with food storage or preparation appliances.

Perhaps most notably, I have found that with the trends of gentrification and the criminalization of the poor and homeless, places to obtain food have become a contested political space. Compared to 10 years ago, there are many more food outlets around Skid Row. The community went from having no grocery stores to having two within a two mile radius—a Ralph’s and Whole Foods. However, from the assessment, I found that these supermarkets are underutilized by community residents, who would rather shop at Food4Less or the 99-cent Only Store farther away, not only because the prices at the nearer stores are beyond their budget, but also because residents do not feel welcome at these supermarkets. Residents recount being followed because they were assumed to be shoplifting, and even being harassed and shamed by store employees for using an Electronic Benefits Transfer (EBT) card.

Working with LA CAN, I have gained several valuable lessons.

I am thankful for the time I was able to spend with LA CAN. Continually, the commitment of the organizers and community leaders to always be pursuing liberation that I was able to bear witness to at LA CAN will inspire me even as I transition out of the fellowship.

Thanks for following along in our series of Field Site Spotlights for the 23rd Class of Emerson Hunger Fellows. We’re proud to share some of the work they’ve done during their fellowship year to end hunger around the country. Missed any of our previous installments? See the reflections from the rest of the 23rd Class below—