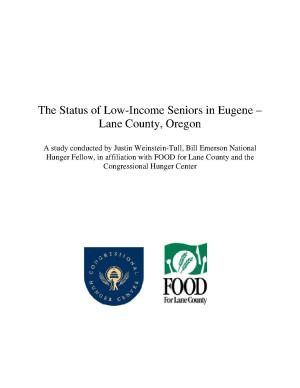 The Status of Low-Income Seniors in Eugene, Oregon

The Status of Low-Income Seniors in Eugene, Oregon shares results and analysis of a survey designed to better understand the state of hunger and poverty among low-income seniors in Eugene so that service providers can address the problems, and craft programs specifically designed to provide aid to seniors who need it.

Download "The Status of Low-Income Seniors in Eugene, Oregon"

Justin earned a Bachelor of Science from Stanford University in Symbolic Systems (an interdisciplinary program combining Computer Science, Psychology, Philosophy, and Linguistics), and a Master of Arts in Modern Thought and Literature (another interdisciplinary major combining Literature, Philosophy, and Literary Theory).  He has worked with various community kitchens in the Bay Area and initiated several anti-hunger programs with the Stanford student anti-hunger group.