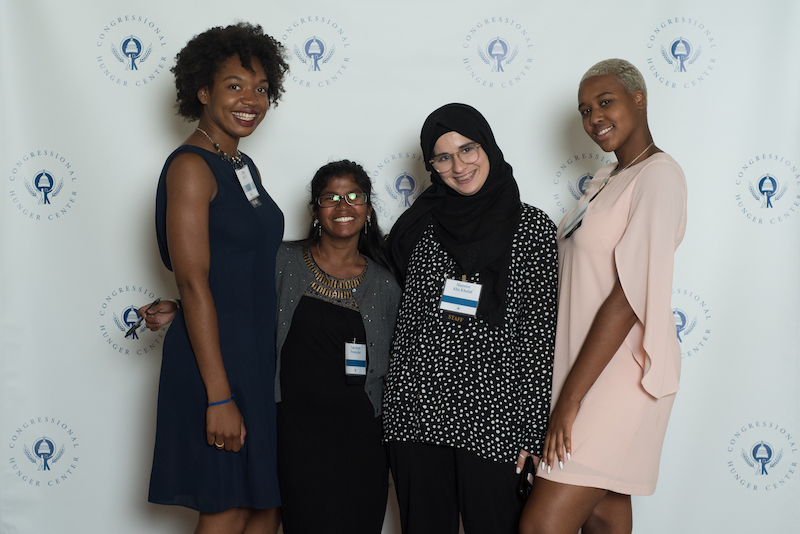 This summer, four university students traveled to Washington, D.C., to participate in the pilot cohort of the Zero Hunger Internship Program, a new initiative developed by the Congressional Hunger Center and the Bonner Foundation. Leveraging the Congressional Hunger Center’s policy education and leadership development expertise and the Bonner Foundation’s extensive network of service-focused leaders, the program gives students in the Bonner network an opportunity to learn about federal anti-hunger policy and gain firsthand experience working with nationally-focused organizations. After the internship, these student leaders bring back their new anti-hunger advocacy skills to their campus communities.

The four students who made up the pilot cohort of the Zero Hunger Internship Program each worked for seven weeks with a non-profit organization specializing in federal anti-hunger policy:

In addition to their work at their internship placements, the Zero Hunger Interns participated in four day-long trainings designed to give them a deeper understanding of hunger in the U.S. Representatives from Feeding America, the DC Fiscal Policy Institute, and Bread for the World shared their expertise, covering the basics of anti-hunger and anti-poverty policy, the root causes of hunger, the racial wealth gap, professional development, and how to create local change. To foster a learning cohort dedicated to ending hunger, the trainings were open to interns working at other anti-poverty organizations in D.C. The four Zero Hunger Interns connected with peers from DC Greens, MAZON: A Jewish Response to Hunger, Feeding America, Bread for the World, Youth Service America, the Corporation for National and Community Service, CARE, the Georgetown Center on Poverty and Inequality, and more.

One goal of the Zero Hunger Internship Program is to help participants connect federal nutrition policy to their experiences fighting hunger on a local level. All four interns had demonstrated their commitment to fighting hunger before they arrived in D.C. Whether it was working on expanding food access in West Atlanta or coordinating volunteers at a soup kitchen in Chapel Hill, each had served with community-based hunger relief organizations as a student leader with the Bonner Foundation. By the end of the summer, Nesreen saw connections between the hunger problems in Chapel Hill and gaps in federal nutrition policy:

Zero Hunger Interns and peers from other anti-hunger organizations at a Q&A session with Rep. James P. McGovern in his office on Capitol Hill.

The Zero Hunger Internship Program also gives participants a front-row seat to federal advocacy and the policy making process. The interns attended the markup of the Senate’s Farm Bill, coordinated lobby days, and contributed to research on racial equity and the federal nutrition programs. In one training, interns had a Q&A session with our Board Chair, Rep. Jim McGovern, and his staff on Capitol Hill.

Lakshmi visited Representatives from North Carolina as part of her work with RESULTS. She stated that it is important for individuals to tell members of Congress how a policy impacts their lives,and that it is essential for elected officials to know that SNAP and WIC help families make ends meet. Nesreen agreed: “The most important thing I learned about anti-hunger policy is how central it is to the lives of so many people in America.”

We asked Nesreen if the internship had motivated her to learn more about hunger or policy. She responded:

“I want to continue to learn about more ways to incorporate innovative policy solutions to address the needs of special populations in the U.S. I want to learn about ways to address the special needs of various groups while cultivating the diversity they bring and allowing them to flourish, thrive, and succeed without sacrificing any part of their identity.

“Working with a faith-based policy organization also inspired me to seek ways to gather individuals of minority faiths to advocate for policy that is in line with their teachings, which often include ending hunger and poverty. I want to learn more about how the shared values among faiths can be used to create a sense of shared purpose among different faith groups and in turn gather large grassroots support for issues impacting our communities.

“It also inspired me to seek more opportunities for Muslims to engage in policy and increase the role Muslim Americans hold in making policy that directly impacts our day to day.”

Lakshmi, a D.C. native, was also inspired to be more involved: “I grew up in D.C. I have seen homeless people displaced but watched from the sidelines. I have decided that I am tired of being on the sidelines…I will find ways that I, as an individual, can fight to end hunger by 2030.”

For Tenè, “one of the most important takeaways was the power of voices on the local level. There is a lack of awareness of how much power we have as college students to raise awareness and voice our concerns about issues that directly affect us and our home communities.”

Their summer internships complete, Emani, Tenè, Lakshmi, and Nesreen have returned to their universities but are now part of our expanding network of anti-hunger leaders. We are looking forward to next summer, when we will be inviting another cohort of Zero Hunger Interns to Washington, and to the wider fight against hunger.

Special thanks to the Sodexo Stop Hunger Foundation and the Bonner Foundation for making the Zero Hunger Internship program possible.