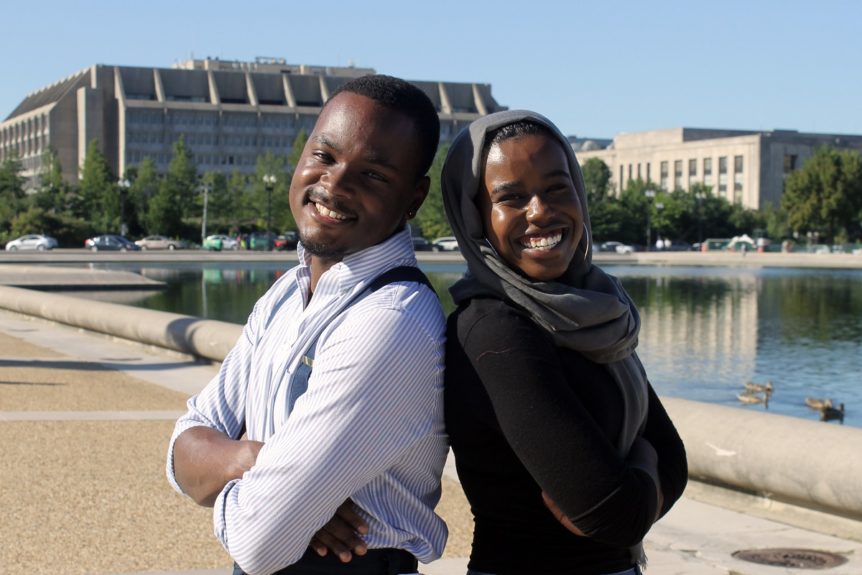 26th Class Emerson Fellows Methany Eltigani and Jarvis Benson are in Birmingham, Alabama, for the field placement portion of their fellowships. Methany is placed with Community Food Bank of Central Alabama, and Jarvis is placed with Alabama Possible. 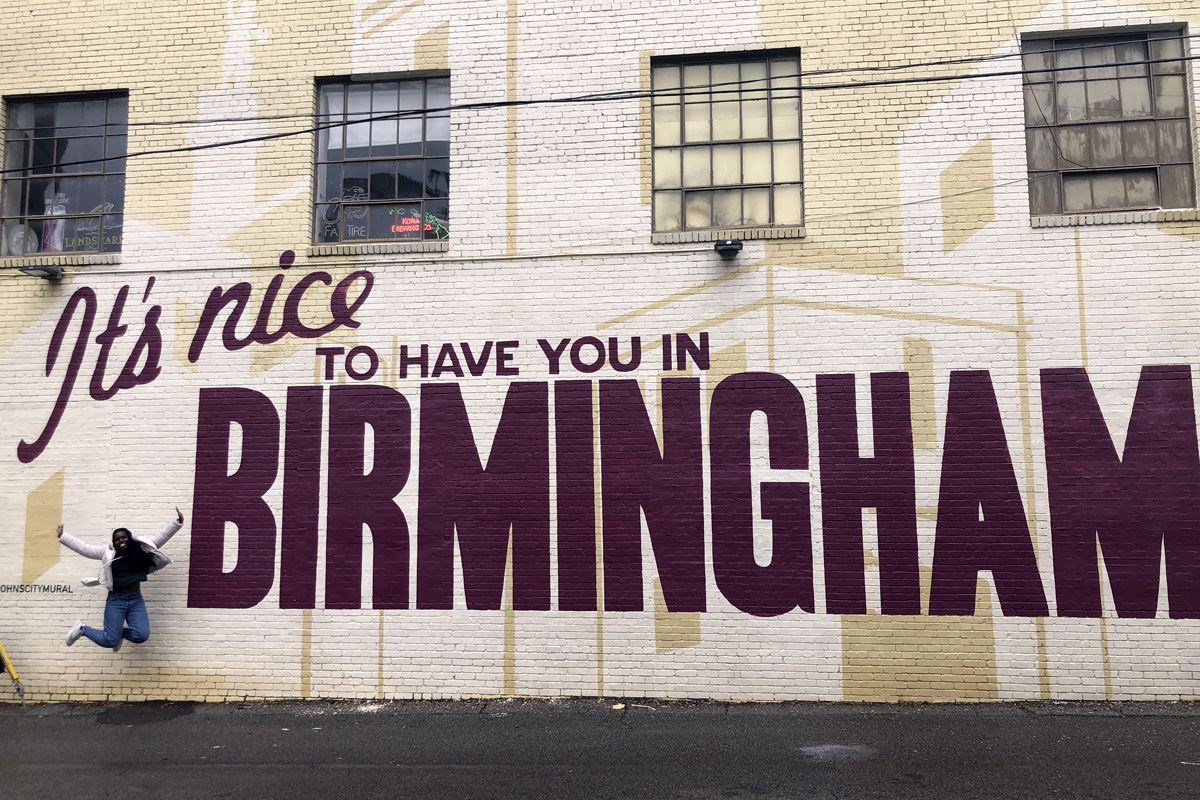 Methany Eltigani in Birmingham, Ala.

Three months ago, I moved to Birmingham after having lived my entire life in Philadelphia. Moving to Alabama’s largest city meant a slight adjustment in my previous way of life. It meant driving everywhere instead of taking a train. It meant making friendly conversation with every person I encounter. It meant living in a region of the country where I had never ventured, but where I ended up feeling right at home.

During my time in Birmingham, I experienced a lot of firsts: My first time riding a mechanical bull; my first time eating authentic BBQ; my first country concert. And I thought I had seen football fanaticism before, but I was not at all prepared for the die-hard football culture that awaited me here. Birmingham is also a city known for its central role in the civil rights movement. Moving here has given me a chance to envision a history I could only read about in books. Here, I am able to witness a service at the 16th Street Baptist Church, visit the jail where Martin Luther King, Jr. penned his infamous letter, and stand at the bus stop where Rosa Parks waited to board.

This city has had a tremendous impact in the fight for social justice and continues to be a site where people are fighting for change in their communities. I am able to see this firsthand every day in my line of work. For my field placement, I was matched with the Community Food Bank of Central Alabama, an organization that partners with food pantries, shelters, and senior and child nutrition programs to provide access to food and necessities across twelve different counties. Their mission statement reads, “The Community Food Bank of Central Alabama feeds people in need today and fosters collaborative solutions to end hunger tomorrow.”

The Food Bank’s strategic plan for the next few years involves many different projects to help realize their vision. The project that I am working on seeks to develop the capacity of its partner agencies to meet the needs of their respective communities. During my first couple of months, I conducted a partner agency network-wide survey to assess the current capacities of each agency. I had the opportunity to travel to each of the twelve counties we serve in central Alabama to interview food pantry directors, many of whom were leaders in their churches and communities. Traveling from county to county allowed me to see the different needs that varied across communities. One county was at the center of Alabama’s opioid epidemic while another was facing one of the state’s highest rates of child food insecurity. Listening to people discuss their barriers underlined the importance of incorporating health equity into anti-hunger work. We cannot eradicate food insecurity without tackling the root issues that take on different forms in different populations.

With the results of my survey, I am working to create a criteria system that will be used to segment the Food Bank’s partner network into groups based on agency type, capacity, interests, and operations. The goal of this project is to transform food pantries into food and health resource centers, where people have access to healthy foods as well as nutrition education, health screenings, SNAP outreach, and more. The most important outcome of this project will be developing a strategic plan that will identify gaps and tailor support to the needs of each partner agency. Being able to expand the capacity of the Food Bank’s partners will allow food pantries and programs to serve as platforms for health promotion in their communities.

The main reason I became an Emerson National Hunger Fellow was to gain experience in the field of community nutrition and to learn from anti-hunger leaders. One of the best aspects of the Emerson program is that it partners with organizations all over the country to unify our efforts across different regions. Prior to this program, the only perceptions I had of the Deep South derived from the media and pop culture. Living in a community so far removed from my own forced me to step back and assess my own presumptions. I am grateful that I have had this opportunity to learn from and make connections with people I might otherwise have never encountered. The most important lesson this fellowship has taught me thus far was that centering the people I am trying to help is the only way to move toward an equitable and sustainable solution. 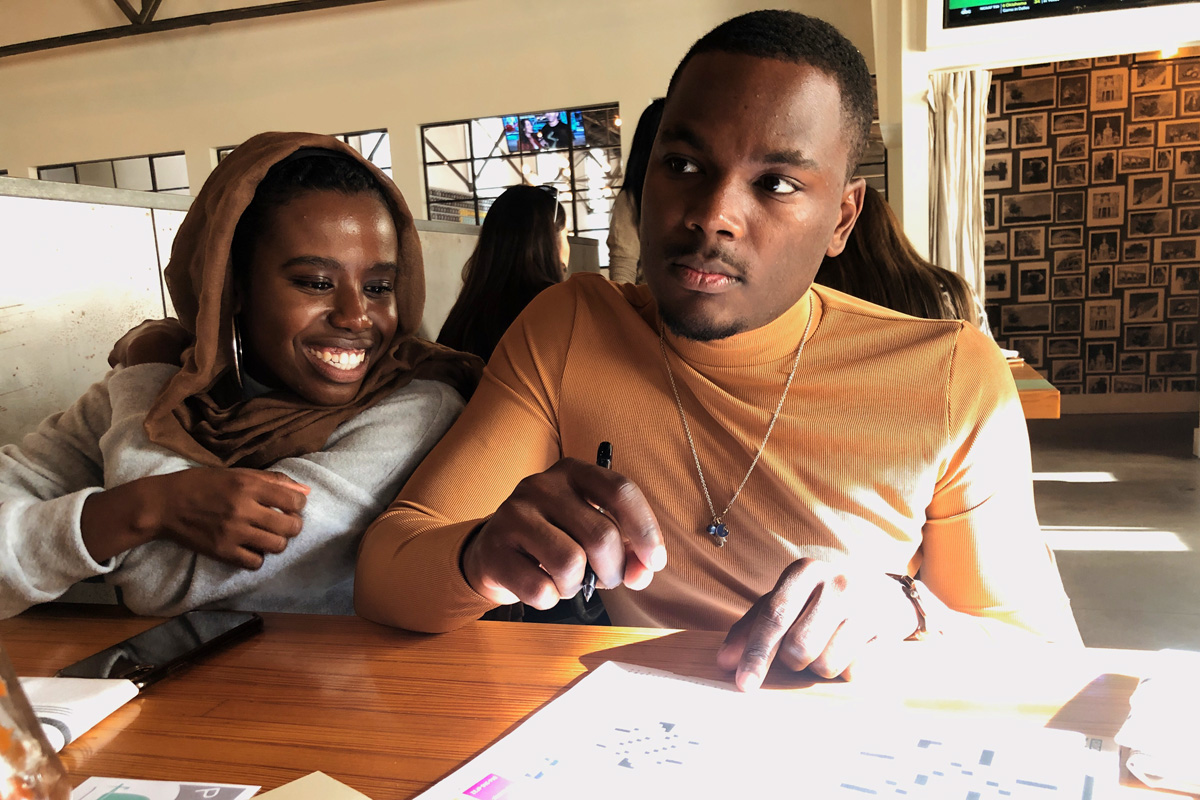 A few weeks ago, I spent a long time on the phone talking with Mrs. Irene Johnson, a longtime Southtown Housing Authority resident and the president of the Southside Neighborhood Association. We discussed everything from the legacy of segregation in Birmingham, the importance of an accurate census count, to her awakening as an active member of the community. For the past few years Mrs. Johnson has worked to ensure that resident voices are heard in the face of redevelopment. After three years of negotiations, the Housing Authority of the Birmingham District (the city’s public housing agency) and the Southside Development Co. have approved a Master Development Agreement for a redevelopment project of Southtown Court. Demolition of the community is expected to start in Summer 20201. My field site experience at statewide nonprofit Alabama Possible has been focused on ensuring that, despite displacement and disenfranchisement, Southtown residents and similar communities are counted in the 2020 Census.

In the continuous struggle towards an equitable and just United States, Birmingham, Alabama, is a key battleground. Birmingham, the largest municipality in the state, was founded at the end of the 19th century near one of the world’s richest deposits of minerals. The city’s economy boomed so quickly that it came to be known as the “Magic City.” This black magic, however, was wielded only by rich, landowning whites. The resource extraction that built wealth for few was possible only through exploitation of low-wage labor—waves of Black and white migrants to the Magic City in search of better wages and relief from rural poverty2.

In the 1930s, not unlike other American cities, Birmingham sliced out neighborhoods for Black families, funneling them into only these approved areas. In those redlined communities, the budget for community aesthetics was slashed, leaving roads unpaved and yards overgrown. Meanwhile, the Birmingham suburbs, affectionately referred to as “Over the Mountain,” rose in status and value. Birmingham is still deeply segregated today. While most white families have moved “Over the Mountain” where poverty is not as concentrated, the urban center of the city is largely Black and experiences a deep level of poverty. For example, over 70% of the population in the census tract where Southtown Court is located lives below the poverty level. Less than 2 miles away, 3.1% of the population experiences poverty3

Alabama Possible looks to understand and address the systemic poverty seen in the city and across Alabama. Another project that I have worked on during my time here has been developing a lesson plan and discussion guide to be used with the organization’s Poverty Data Sheet that highlights poverty in the state within a given year. As I piloted the lesson plan in UAB classrooms earlier this fall, I was able to discuss the impact of systemic racism and class division on lives of Alabamians. Poverty impacts so many of us—nearly 17% of Jefferson County—it is imperative that we discuss the roots of it with care, earnestness, and urgency.

My main project is increasing awareness of the 2020 Census—one way that communities affected by hunger and poverty can ensure that their stories are heard. Historically, the Census has disproportionately undercounted the Black community. At the founding of this country, enslaved Africans and their descendants were constitutionally counted as three-fifths of a person. This has unfortunate parallels to today. The Census Bureau reported that the 2010 Census saw an undercount of more than 2 per 100 Black individuals—and 10 per 100 Black men!4 We are working with a coalition of local organizations focused on preventing this undercount of not only Black folks, but other hard-to-count communities including children, rural residents, individuals of color, immigrants, houseless individuals, and others. Funding to Alabama for many important programs that affect health care, education, infrastructure development, and housing development is dependent on census data.

It has been my mission to assist in building a collaborative effort within these communities. I have visited housing authorities around Birmingham to talk with residents about how they feel about the upcoming census. Some have offered hope that the promise of more resources and representation will manifest. Others noted that “people just feel like they don’t matter.” All experiences and needs are valid, and it is important to me that we build a census outreach campaign that recognizes this. I’m appreciative of Alabama Possible’s executive director, Kristina Scott, emphasizing that we work with communities and not to or for. This way we can build networks, broaden relationships, and build the capacity to really address these systemic issues.

While I have learned so much at Alabama Possible, I have gained just as much knowledge through engagement with the community. One key lesson that Mrs. Irene has offered me was “Push back from the board table.” I look forward to continuing to push back and reaching folks where they are.

A view down 2nd Ave North in Birmingham, Ala. Photo: Clark Tibbs