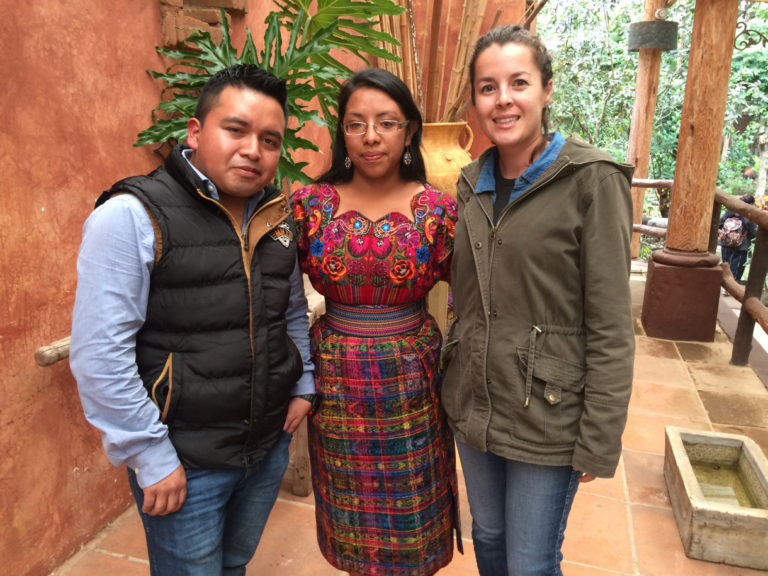 Leland Hunger Fellow Tina Pruna started her fellowship placed with Mercy Corps in Guatemala, finding ways for women and youth to revitalize agriculture in the country. We talked with Tina earlier this summer about her current work, some challenges to making foreign aid truly effective, and some potential solutions. Read the full interview below.

“We just gave them guidance, and they were able to take it from there.” 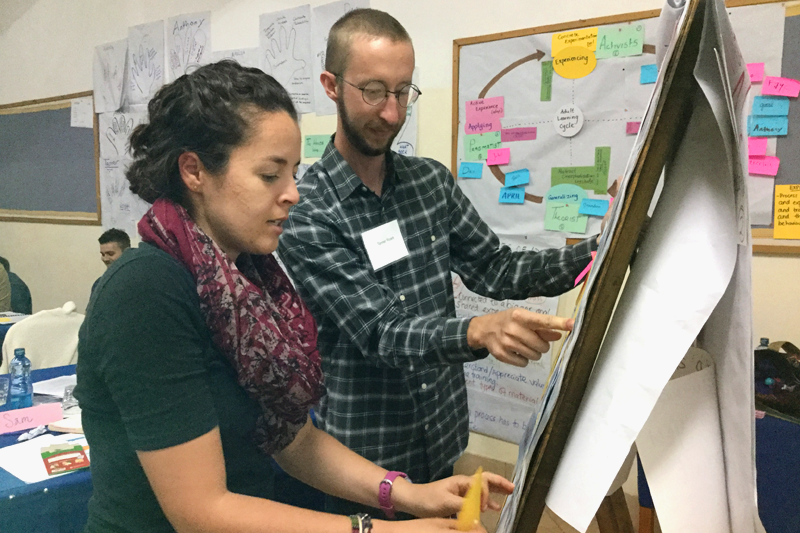 What have you been working on at Mercy Corps since you’ve switched into the second half of your fellowship?

Since transitioning from the field to the world of policy here in Washington, D.C., I have been working on Central American prosperity; specifically, the areas we cover are food security and migration. What I’ve been working on in large part the last few months has been demonstrating aid effectiveness in Central America and exploring if it has an effect on migration. So, really looking at the root causes of migration from Central America. And I’m presenting those findings with policymakers, legislative aides, and legislative assistants on the Hill.

Can you name an example of when principles of either accountability or of country ownership were put into practice in Guatemala, and if it wound up leading to a good outcome for the people there?

I can speak to that on the community level—I did see that come into play in the project I was working on, AgriJoven. For this two-year project, we were working with young, rural farmers. We created youth savings and loans groups. One thing [Mercy Corps] is really proud of is, where other organizations often give incentives for involvement, we did not do that, and we were still able to get over 1,000 youths involved, and to change some of their habits to regularly save. Through those savings and loans groups, youth started generating their own money, and they were able to give out loans to their own group members so that they could reinvest that money in agriculture. That project gave youth the empowerment and ownership of their own lives; we just gave them guidance, and they were able to take it from there.

The biggest success in terms of ownership was, as this project was coming to an end and the groups were realizing that we weren’t going to be there anymore, they started collaborating to create a network of all of the youth groups that we had started as a way to kind of govern themselves and continue maintaining communication and sharing best practices. That was all led by the participants, and it ensured a sense of ownership and accountability after that project ended.

Why was it important to Mercy Corps that there be no incentives for participation?

Normally, [some] nonprofits will say, “If you join our group, we’ll give you 20 bucks,” or “We’ll give your family a bag a of rice,” or something. There’s something in it for the community to get involved, and it kind of leads to a sense of expectation and dependency on the aid organizations. We didn’t do that. It was a lot of grassroots work, actually knocking on doors and talking to the community leaders, saying, “Hey, we have this program we want to start with your youth. Can you please help us spread the word?” It was definitely a slow grow at first, because a lot of [people] said, “Well, what’s in it for me?” And it’s a bit harder to sell: “We’re going to teach you these good agricultural practices that, in the long-term, are going to be really helpful to you.”

I guess it’s not as enticing as, “Hey, we’re going to give you $50 to start saving with us.” [But by the end] they can see how much power they have in saving, because it’s [the participants] themselves. They always start by saying, “Well, I don’t have a job. I can’t save money.” But then, soon enough, they start realizing that they have the power to save 10 quetzals a week, which is equivalent of $1.25. While that may not seem like a lot, it’s really powerful for them at the end of six months to see how much they saved, even just by saving like that small amount. Knowing that every single quetzal is theirs is really powerful as an incentive to keep doing that, because they did it themselves. And it’s a finish line of pride that comes with that.

“It’s hard to make a compelling argument when everyone’s speaking a different language.”

Now that you’re in the second half of the fellowship, can you see some places where accountability or country ownership are or are not being applied?

I definitely notice it in a different way because now I’m working at a policy level, and we’re not just looking at one community in Guatemala, or even just one country, but at a regional or global level. One question I see based on the portfolio that I help cover is, to what level are we as a country willing to invest in another country when there’s no results that are being seen? I’m speaking specifically right now about Guatemala, and threats to cut all foreign aid to the countries in the Northern Triangle [of Guatemala, Honduras, and El Salvador]. How do you hold a leader accountable for corruption, and for misusing funds that were meant for development? How do you ensure that the people who actually need the money or your investment don’t suffer because of the corruption of their leaders? The issue with country ownership is in the assumption that the country itself and its leader wants change; unfortunately, we’re often considering countries just based on the decisions of their leaders, and a lot of times the leaders are not the best—they’re often a little bit corrupt, and I think that puts a kink in the argument of country ownership.

But I think that it’s the correct way that we need to be going—USAID’s Journey to Self-Reliance, I think that’s the correct way. We should be working towards helping a country reach their own potential, showing them the way, helping them, and then leaving when it’s done. But it’s definitely a gradual process, and a lot of times program funding schedules don’t always match up with the time needed to actually see changes. Funding that’s allocated for programs is usually, maximum, like five years, but it may take longer to actually see measurable change, especially when you’re trying to do something at scale.

So, if there’s knowledge of these principles established in the development world, is the problem just that it takes a long time to make change?

I think that’s one of the issues, and I’m obviously only thinking from my own very small perspective.

I think another issue is we’re not tracking the things that we need to be tracking. This year [I’ve] been following the administration’s comments about cutting all foreign aid to a specific region, based on not being able to see a measurable change in the community, and increased violence and the mass caravans moving towards an open border as examples that our investments are not going a long way. But the reality is that for the programs we have been implementing, we were never tracking migration as an indicator of success. There’s room for improvement for monitoring migration when its appropriate and relevant for the program; not just on our program level, but on an overall country and regional level. Everybody ends up measuring different things, and it’s really hard to combine data when Mercy Corps is measuring one thing and World Vision is measuring something else. It’s hard to make a compelling argument that a country is moving toward self-reliance when everyone’s speaking a different language.

“People trust them because they’re honest, they’re good at their job, and they follow through with what they say.” 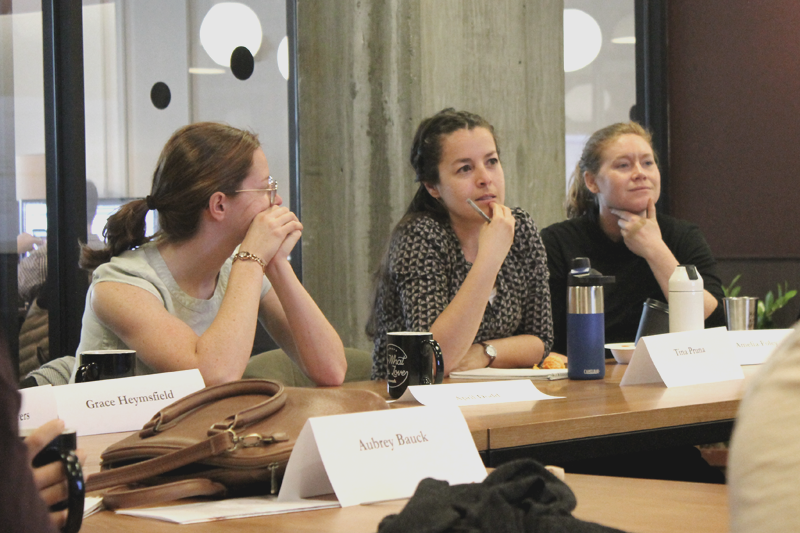 Hunger Fellow Tina Pruna (center) poses a question to a guest speaker at the Leland Fellows’ mid-policy retreat and training in March 2019.

Based on what you’ve seen and what you’ve learned in this fellowship, do you have a key takeaway about how development or humanitarian assistance could be improved?

I think one area that could be improved, is that [development] seems to be very siloed. Especially on the headquarters level, a lot of times you’re very much stuck in what you are an expert in, whether it be food security or nutrition or youth. But the problems that we’re facing are so complex that you really can’t just work in one sector—with food security, there’s so many areas that are interconnected. I think the biggest improvement is just working closer together and realizing the intricate nature of what we do. As a development professional, if you’re in the field, a lot of times you don’t consider how the decisions being made by headquarters or in Washington are going to trickle down to us.

I had a great interview with someone from World Vision on a project that he did in northeast Nigeria. He was saying, “Even though we are development professionals and working in the humanitarian sector, organizations are still kind of selfish at the end of the day. They want to receive credit for an amazing project that they did.” We all want to plant our flag. And I’ve seen a lot of times when people aren’t willing to collaborate because it would weaken their reported success. When you say five organizations worked together, it’s a lot harder to take credit for something and have bragging rights. I think we all need to work together a little bit more and put our pride aside. We could be working with another organization that has a much better way to do something, and communicating best practices a bit more.

What have you learned about leadership so far in this fellowship?

I think it’s something that I always knew, but I’ve been pleasantly surprised to see it played out—that leaders come in all shapes and sizes and ages and personalities. I think that a lot of times we praise leaders that are really charismatic and just demand attention. Those are the people that we see as leaders, but I’ve seen leaders in the field that are very unassuming. They’re very quiet, but people trust them because they’re honest, they’re good at their job, and they follow through with what they say. So, if anything, it’s been great to see the different types of leadership that exist.

I have also been excited to see that there are so many women taking leadership roles in the field of development. At every meeting or seminar I go to, the representation from NGOs is predominantly women. They don’t necessarily have the highest positions of CEO or something yet, but I’m starting to see that change. It’s great to see that this sector is really valuing women’s leadership. I think that’s an area that is growing across many sectors, but I think in the development world, it’s great to see that we value leaders from all walks of life.

This interview is part of a blog series with Modernizing Foreign Assistance Network(MFAN), a reform coalition of international development and foreign policy practitioners, policy advocates and experts, concerned citizens, and private sector organizations, created to build upon the bipartisan consensus that the U.S. should play a leadership role in achieving economic growth and reducing poverty and suffering around the world, and that we can play this role more effectively, efficiently, and transparently. Learn more about MFAN at modernizeaid.net.