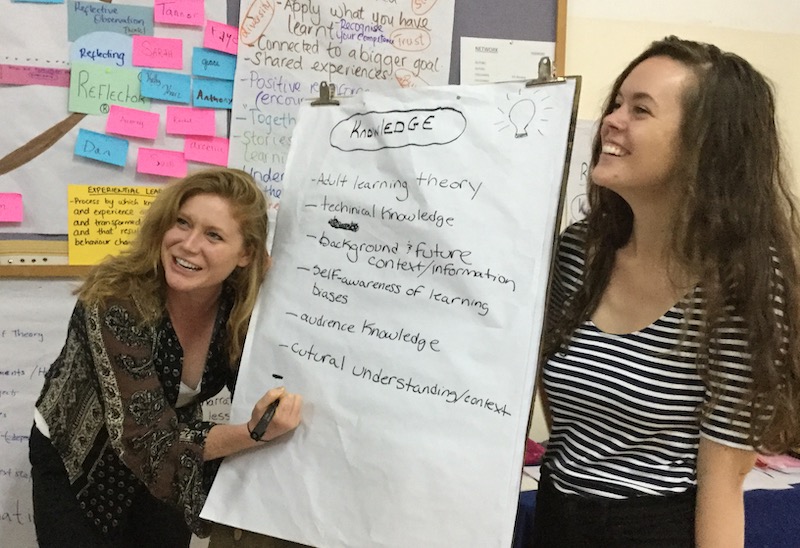 The last we heard from Amelia Foley she was working on an evaluation of CARE International’s FANSER project in Zambia. Now she’s working with CARE‘s Policy and Advocacy team at their Washington, D.C. office, enhancing the organization’s global food and nutrition security policy and advocacy agenda by conducting a global nutrition landscape analysis and supporting CARE’s country offices with nutrition policy and advocacy efforts. We sat down to ask Amelia how she has encountered principles of aid effectiveness, such as transparency and country ownership, in her field and policy placements.

This interview is part of a new blog series with Modernizing Foreign Assistance Network (MFAN), a reform coalition of international development and foreign policy practitioners, policy advocates and experts, concerned citizens, and private sector organizations, created to build upon the bipartisan consensus that the U.S. should play a leadership role in achieving economic growth and reducing poverty and suffering around the world, and that we can play this role more effectively, efficiently, and transparently. Learn more about MFAN at modernizeaid.net.

“What fuels people? Nutrition. And we’re not putting any money into it!”

» There is broad agreement that accountability and country ownership are crucial to effective development assistance. Did you see, during your time as a fellow, an example of when you witnessed one of these principles being put into practice, and what kind of outcome it led to for the people of Zambia?

I worked on a nutrition budgetary analysis that was coordinated with a larger project that CARE did with the Graça Machel Trust, which does a lot of regional advocacy work around Southern Africa. They developed this East and Southern African National Budget Commitment to Nutrition Report, and one of the things that came out was, essentially, the funding around nutrition is a rounding error for most of these countries—it’s just very low percentages. When you think about what drives development, it’s people; and what fuels people? Nutrition. And we’re not putting any money into it!

So, this report was a critique on the fact that there’s not enough funding for nutrition. It said, “we can do better, and we have to do better, and here’s why. Here’s what the figures actually are.” It was tailored to the audience, and the audience wasn’t a donor—the audience was a host country government. It was a call to action, but it wasn’t preachy, because it was done with government in mind. And in 2019, the government of Zambia has increased the budget to nutrition by $80,000, or one million kwacha.1

In terms of principles of aid effectiveness, not only was it a case study of country ownership, it was regional ownership. I think regional advocacy is a place that we can definitely beef up some work, for sure, especially because with increased globalization and trade, this is not happening just in Zambia or Malawi or Tanzania, it’s happening to the region. And with a lot of the regional influences, especially around climate change and things like that, I think that there will be need [for countries] to band together.

» Now that your work has a different scope, do you see other situations where these principles are or are not being applied?

Yes. I think something that I would really like to push back on is the larger community’s nutrition work: [specifically,] the instrumentalist message around nutrition, wanting pregnant and lactating women to be well-nourished so they can have productive children that can contribute to the economy. Where in reality, it’s not just moms and babies who need good nutrition, it’s also nulliparous women and adolescent girls. There’s this huge issue with the way that we talk about nutrition—it’s leaving out a lot of women, and it’s also leaving out men and boys.

Obviously, gender equality, and targeted strategies to increase nourishment for women and children is something I very strongly believe in. But—and I’m not alone in this critique—”The First 1,000 Days of Life” has been incredibly instrumentalist in the way that they’ve framed the nutrition argument. When I use the word instrumentalist, [I mean] how economists frame arguments: using human bodies as instruments to a larger goal, instead of just taking their well-being as an outcome itself. So, when we talk about nutrition, you don’t talk about happiness; that’s not a metric used. Or wellbeing.

I’m not ignorant to the fact that you have to frame messaging in a way that is appealing to donors and the private sector and governments. But I think that something gets lost when we say “okay, stunting costs economies this much money.” But also, it’s lives. That doesn’t get amplified to the same measure. And I think that it’s damning. We live in a capitalistic society; I understand that the way that we measure success is through dollar signs. But something that I would encourage is also integrating messages about dignity. Like, yes, for every $1 spent on nutrition, you get $16 back in terms of economic growth, the Global Nutrition Report statistic, but also, you are increasing access to food and restoring human dignity. That’s not something that gets talked about very much, and it’s just one line, you know: “…and restoring dignity.” 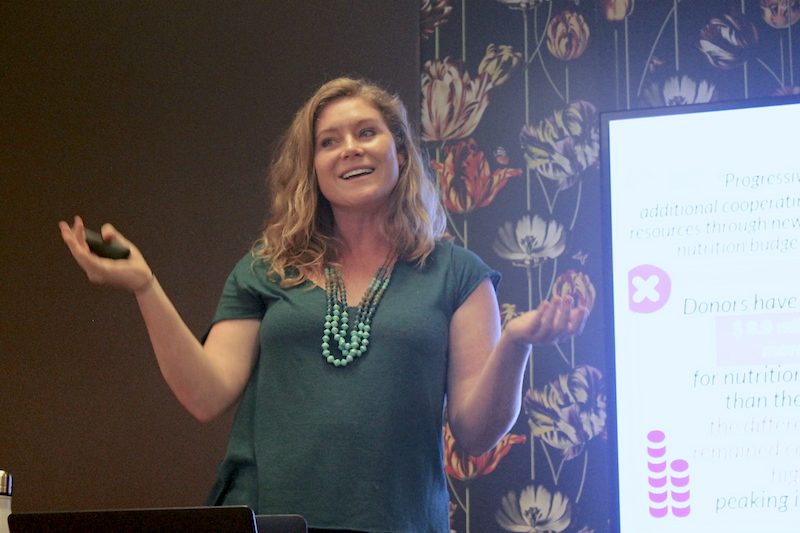 Amelia Foley gives her presentation “Why Does Nutrition Budgeting Matter?” to her fellow Hunger Fellows at policy training, fall 2018.

“The women were so jazzed about the opportunity to give their opinions on things, instead of just, ‘what happened here? Show me your fields.'”

» What would have to change in the development sector in order for these principles of aid effectiveness to be adopted more broadly?

I think some of the metrics that we use would have to change. There has to be an increase in qualitative data capture, and also, just making sure that there is the inclusion of people actually being affected by the problem areas—a FUBU principle, “for us, by us.” When I’m thinking about how we could change the instrumentalist narrative, it would be amplifying the voices and stories. Because even when I was doing qualitative data collection for the food security initiative evaluation that I ran, our success stories were, “yes, talk about the [sweet potato] vine multiplication and the number of vines that she sold.”2 Which was very impressive and cool, but that’s not qualitative data, really—it’s complementing quantitative data.

I think, also, just making sure that the questions that we’re asking aren’t only about economic activity. Data around food security, particularly, is very “x + y = z,” right? I think that we owe it to impacted populations to make sure that, not only are we trying to increase your number of productive hours and your economic viability, but we’re also trying to restore dignity and increase wellbeing. I think we can do that on a program level with some of the data and the questions that we ask. For one of the evaluation questions, we were trying to assess CARE’s implementation [of the initiative] and what the community perceived. I asked the women, “did you feel like CARE valued your opinion during these activities?” And the women were so jazzed about the opportunity to give their opinions on things, instead of just, “what happened here? Show me your fields.”

There’s also something to be said around the fact that a lot of the ways that we’re capturing data is based on households, and it’s based on individual members of the household. So, I would also advocate for disaggregating data; CARE is actually a leader on that. In terms of gender transformation, in terms of data collection, I think, as an organization, CARE is leading.

» In terms of reviewing these metrics and making the stories of people integral to the work, where do you think the agency to make this change comes from?

I think it’s donors. There’s a line that I really like from the 2019 Gates letter that says, “what we choose to measure is a reflection of what society values.” I think that’s it. The metrics that we use are based on research, but it’s about what the donors want to see. I think we owe it to ourselves to provide rich answers to questions, and “I don’t know” is not an acceptable answer. Or, it could be: “I don’t know…but here’s some focus group quotes that we’ve gotten; here’s some thematic analysis that we’ve done based on conversations we’ve had with these women.” I think that that comes from the donors being a little bit less rigid around what an evaluation looks like, and also what metrics you have to hit.

I’m a huge believer in evidence; I want rigorous evidence. I obviously advocate for making sure that the dollars go to interventions that are increasing wellbeing for people in meaningful ways, but I think that the donors can re-examine their control around what measurements are done and how they are measured.

» What would you say you’ve learned about leadership so far as a Leland Fellow?

There’s a quote that I really like: “don’t ask what the world needs; ask yourself what makes you comes alive, and go do that, because what the world needs is people who come alive.” I think leaders need a verve for the topics that they’re talking about. There’s a bunch of hard skills in terms of making sure that logistics get done, but I think that leading and managing are two different things. Being a leader is about pursuing what lights you up, and if it doesn’t light you up, then maybe you’re not the one who should lead; and being cognizant, again, of who you are, and whether or not this is something you need to lead on.

Mindful leadership that’s centered in equity but also, passion—those are things that I’m wrangling with; what content areas within the hunger and international development space and nutrition space are the ones that I’m well suited for, that I feel activated by. But also, what are the areas where, potentially, my voice isn’t really needed? Maybe by being a good leader, I’m connecting someone else to a position, leveraging that privilege I have as a white American and making sure that other voices are heard. I keep thinking about Leland leadership model and amplifying voices of those affected by hunger. It’s about what lights you up, but it’s also about knowing where you can serve, and what service means.

What Happens When Nowhere is Safe?

Serve the Line and Shorten the Line: Emergency Food and Equity in Houston

Space for Connection: Midfield Retreat with the Emerson Hunger Fellows