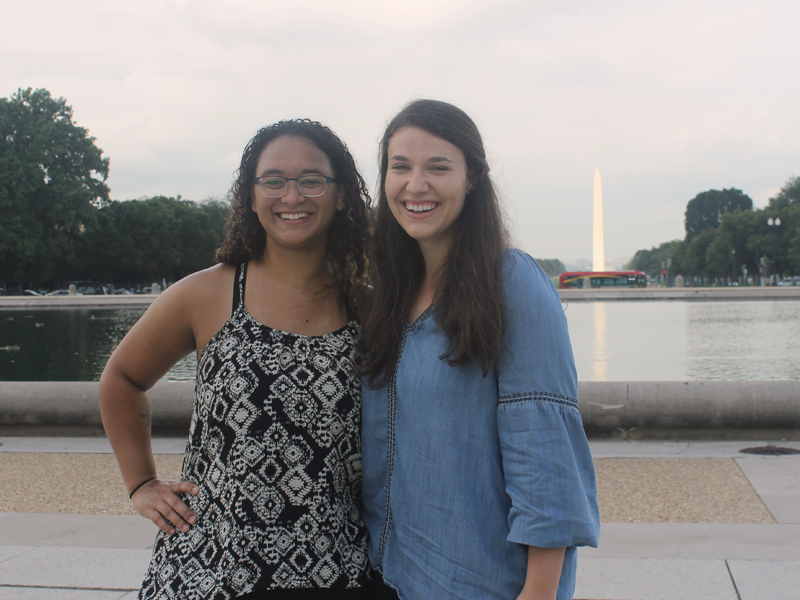 At the southernmost tip of West Virginia, nestled in the Appalachian Mountains, is McDowell County. Once dubbed “the heart of America’s coal bin,” the decline of the mining industry in the area has led to a pervasive economic downturn and high levels of food insecurity. Community partnerships like Reconnecting McDowell are focusing on long-term investments in improving education to set their community on a path to reconnecting its hopes for the future. Mackenzie Aime and Lakeisha Perkins, working with Reconnecting McDowell this year, are the first two Emerson Fellows ever to be placed in West Virginia. Read on to hear about how their work is improving nutrition in schools and strengthening this community in the Mountain State.

McDowell County, West Virginia, has been through many changes. It was once home to some of the most productive mines in the country, shipping coal nationwide to support the growth of major cities like New York, Chicago, and Washington, D.C. During the flourishing years from the 1950-60s, the county supported as many as 100,000 people, with large storefronts, movie theatres, and restaurants speckled across the landscape. Fast forward to today: many mines have closed, leaving a dearth of jobs causing population decline. This, in turn, has left some harrowing statistics that the residents of McDowell know too well. As I talked with community members about hunger and poverty issues, they are quick to rattle off the same trends, including a declining population, lack of grocery stores across the county, high unemployment, and opioid addiction. Statistically, this means that 7.0% of the county is unemployed (much higher than the 3.8% national average), 70% of the population lives below 130% of the federal poverty line and are eligible for federal food assistance programs, and 22.4% of the county is food insecure.

But these statistics are not the complete story of McDowell County. Residents often highlight the ingenuity of their community and the pride they have for their home. They stay in the county and work to make it better because it’s home; it’s where they grew up, and it’s where they feel comfortable. The opportunities present in McDowell are on the forefront of residents’ minds and far outweigh the negative statistics that, for some, characterize the area.

Currently, I am placed with Reconnecting McDowell, a nonprofit devoted to improving the educational outcomes and continued success for students by supporting their needs in- and outside of the classroom. Reconnecting McDowell understands that children who are well fed do better in school. By extension, communities that have enough nutritious and easily accessible food create thriving communities. My work is to chart a path for solving some of the hunger and poverty issues in the area by creating a Foodshed Improvement Plan for the county. I have held community meetings across McDowell County, visited schools, conducted individual interviews, and compiled research to create a community-centered plan for how to improve the food options and agriculture opportunities in the area while spurring economic development. The outcome of this project will be a report that outlines the current work in McDowell related to hunger and poverty, while charting out plans to build upon and amplify the strengths of established and successful programming.

What has excited me about this work is seeing the passion and insight of community members. During one community meeting we focused on the vision residents have for their community and what it would take to accomplish their goals. While hunger and poverty elimination were central themes, meeting basic infrastructure needs were most frequently highlighted. To attract new business for job growth the community needs sewer, water, and better roadways. The lack of these essential infrastructure pieces was one of the root causes of poverty for this community. Due to the history of the extraction economy not many of the county’s resources, nor profit from those resources, stayed in McDowell. But, in the majority of conversations I have had thus far, people are excited by the opportunities that can exist here. Due to the rise of tourism from the Hatfield-McCoy ATV trails, there is new life in McDowell. As we continued our conversation, people began rattling off various business ideas. While there are entrepreneurs in the county already garnering success in lodging, handmade crafts, and food service, these community meetings demonstrated how much more is possible in the county when people can access the support they need. As we shifted the topic to past successes, gardening was mentioned, and the discussion became even more animated. Backyard gardens have always been a way of life in Appalachia. Whether in community meetings or in conversation with seniors at the Commission on Aging, as soon as gardening is brought up, so are stories. Stories of five-year-olds walking through the gardens with their mothers, of three generations canning together in the springtime, of inventive ways to use tires for gardening. These stories, goals for the county, and dedication to making things happen, are an inspiration.

Folks in McDowell County need tangible success. As helpful as my project will be in charting a course forward, residents want progress they can see or experience. For a county that has given so much to the rest of the nation in energy and manpower, I hope that my project will encourage sustainable investment centered around the needs and the aspirations of residents.

My years in college were spent learning about food insecurity and poverty in rural communities and contrasting that to urban areas. When I learned about my placement in McDowell County, West Virginia, I was excited to apply my knowledge from college to the work I am passionate about. Placed with Reconnecting McDowell in Welch, West Virginia, my work focuses on the school system in the county. Before this fellowship, I had come to associate rural communities with agriculture, because I am from a majority rural state known for being the second in agricultural production in the United States. I assumed this was the same for all rural communities because it is all I had ever known. But after living in McDowell County, I have come to realize that this rural Appalachian community is not defined by agriculture, but is in fact limited in regard to land access and the number of producers available, which is a common theme throughout West Virginia. Lack of farmers has proved to be the biggest hurdle McDowell County and West Virginia faces in regard to Farm to School programming, which is what my work at Reconnecting McDowell has primarily focused on.

I spent the first few months of my work interacting with folks in the community and listening to their stories of how the county has changed over the last few decades. McDowell County was once the largest coal producer in West Virginia, and in the 1950s, the population was around 100,000. But the lack of economic diversification and the decline of the coal industry caused the population to decrease significantly. Today, the county holds only about 18,000 residents. The child food insecurity rate for the county is 32.4%, compared to the national average of 17.5%. McDowell County is also known as leading the state in opioid hospitalizations and having the highest adult obesity rate in the nation, at 38.1%.

One effort to reduce the food insecurity rates among children in the county is to increase the number of local, healthy food options that school-aged children have access to. Reconnecting McDowell has most recently been focusing on building resources and partnerships to create entrepreneurial and industry growth within agriculture to support the local community, encourage agricultural education and engagement, and reduce child food insecurity rates. My role in this work has been understanding the history of how farm to school has functioned in McDowell County, including how relationships have been strengthened and weakened over time. Over 90% of getting farm to school programming going in the county is relationship building. Personal and professional relationships in a small community like this tend to overlap and blend in many ways. This can be beneficial for someone working to implement a farm to school program, but also detrimental if those relationships are broken or damaged. Most of the work I have been doing has focused on delving into these relationships and figuring out how to strengthen them in ways that are equally beneficial to all key stakeholders, including producers, school officials, and cafeteria workers. I have also gained a lot of helpful information regarding barriers to farm to school, such as a lack of producers and kitchen equipment needed to process fruits and vegetables.

One factor that complicates my work is that most information in the county is gathered by word of mouth, which can make working on farm to school efforts a slow-moving and confusing process at times. I am compiling all the history involved, getting a list of essential farm to school contacts, setting up a plan for how Reconnecting McDowell should proceed with farm to school efforts, and putting together a guide filled with resources for producers on how to interact with and contact the school system to sell their products to schools. These resources will be essential to the future success of farm to school programming in the county.

Before now, there had not been a strong push for farm to school efforts in McDowell County or in West Virginia as a whole. Even though there are successful farm to school programs in the state, this year is the first that the West Virginia Department of Agriculture is creating a Farm to School Strategic Plan for the state. I am excited that I was able to come to the community right as this process is starting. My time here may be shorter than I would like, but my hope is that when I leave this community, I will leave behind a foundation and compilation of resources so that McDowell County’s Farm to School Program can be as successful as possible and share my knowledge of how farm to school programing functions in a rural Appalachian community.

The Congressional Hunger Center gratefully acknowledges the support of the Sodexo Stop Hunger Foundation which made this placement possible.