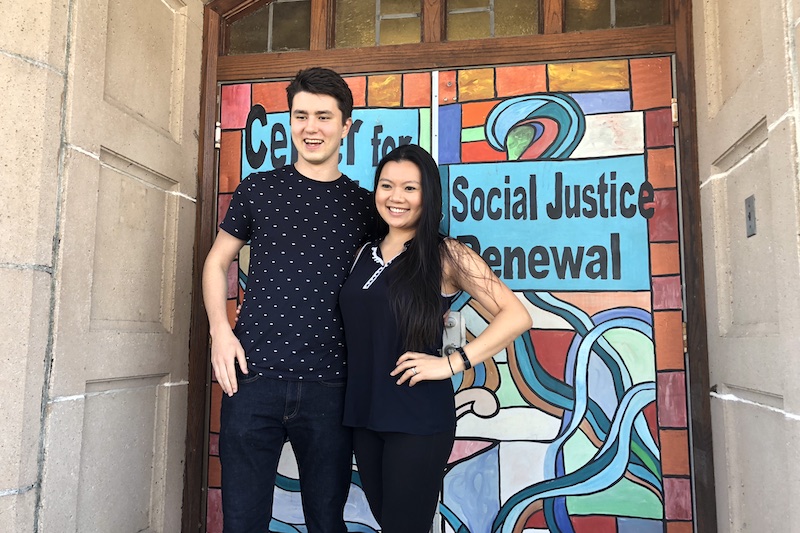 From September 2018 to February 2019, Emerson Hunger Fellows Cindy Vong and Chesterfield Polkey were placed in Pittsburgh, Pennsylvania. Read on to hear how they worked with local organizations Pittsburgh Food Policy Council and Just Harvest to strengthen the local food system and amplify the voices of people receiving public assistance as advocates against hunger.

Known as the “Steel City,” Pittsburgh’s nickname is indicative of the industry’s storied history in the Allegheny County region. Coal, on which steel production depends, was heavily deposited beneath much of southwestern Pennsylvania and helped turn Pittsburgh into an economic powerhouse centered around industrialization and technological development; at its peak, Pittsburgh was extracting 40 million tons of coal per year and manufacturing half the nation’s steel. While the dominance of the local steel industry has passed, the city is reinventing itself through physical and economic transformations with newly renovated shopping, cultural, dining, and entertainment districts and with advanced medicine, education, technology, and banking driving the economy. As someone who had not been to Pittsburgh before, I was excited to explore and experience the great things the city has to offer and learn what it means to be a “yinzer.”

Shortly after arriving in Pittsburgh, I noticed a spirit of friendly collaboration where residents were eagerly looking for new and inspired ways of working together to improve their communities. Whether it was engaging and supporting immigrants, building open databases for public use, or beautifying one of Pittsburgh’s many neighborhoods, there were countless ways to get involved.

The Pittsburgh Food Policy Council (PFPC), founded in 2009, is an organization that arose from this desire for collective community action. PFPC serves as a convening body that brings together stakeholders from diverse food-related sectors to examine, develop, and improve the food system in the Allegheny County region. Currently, their membership base includes over 80 entities and 130 individuals who work together around a common vision of a regional food system, rooted in collaborative, community-based decisions, that prioritizes equity and supports the health of the County’s residents, natural resources, and economy. (The term “food system” is one that warrants definition; it refers to everything from field to fork, including food production, processing, distribution, consumption, and waste management.)

Later in 2017, the Council found that the absence of a repository of food systems-related information hindered their work; without comprehensive data, they could not fully picture how the community was handling food issues (such as food access, nutrition, hunger, etc.), nor how their efforts, and those of the many organizations and institutions that work in the food space, could meet those challenges. They needed this seminal information, as well as a framework document that would both assess the County’s existing food system and set an agenda that PFPC could advance. This led to the decision to create the Greater Pittsburgh Food Action Plan (GPFAP), a guiding document proposes ideas for action and policy recommendations to improve the local food system.

I was placed at the Pittsburgh Food Policy Council to assist with their food action plan by administering the Food Policy Audit. This tool was created by University of Virginia faculty to help planners examine the formal and informal food-related policies that exist in a municipality, with the idea that, with this understanding, decision-makers and leaders can craft more appropriate and targeted policies to address food system gaps and inequities. My project first involved collaborating with PFPC staff, Council members, and community leaders to tailor the Audit to Allegheny County’s unique demographic and governmental situation, and then creating a web-based survey. I worked with Councils of Governments Directors, community organizations, and Council members to disseminate the Audit across all 130 municipalities in Allegheny County, the greatest number of municipalities of any county in Pennsylvania. Finally, I analyzed the Audit’s results and proposed recommendations based upon the findings. The Council and I viewed the Food Policy Audit not only as a way for us to learn about local policies but also an important opportunity to begin forging new relationships and truly making GPFAP a collective community action venture.

While my time with PFPC was short, I hope that my contributions will make GPFAP a more successful project that will have meaningful and longer lasting impacts in the region because there are many people in Pittsburgh and Allegheny County who will benefit from GPFAP and PFPC’s work. I look forward to seeing how the plan comes to fruition at the end of this year. 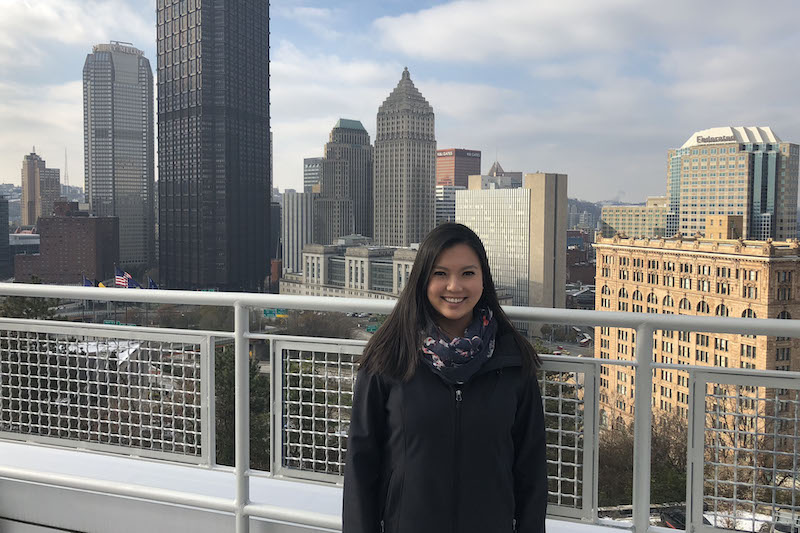 Cindy Vong poses in front of the Pittsburgh skyline

On September 1, 2018, I crossed one of the famous 446 bridges to arrive in the Paris of Appalachia: Pittsburgh, Pennsylvania. Despite the city’s roots as a stalwart of manufacturing and the steel industry, the Rust Belt trend of de-industrialization beginning in the 1980s has resulted in massive layoffs among both blue collar and white collar jobs. During this painful transition city officials worked with the private sector and local universities to design a new Pittsburgh, one with a focus on technology, higher education, and healthcare. Now, the former Steel City is seemingly full of promise; the Economist’s Global Liveability Ranking even lists Pittsburgh as one of the best cities in the United States. However, the ranking’s rosy picture is not an accurate depiction of life for many in the ’Burgh. Over one in eight Pittsburghers remain mired in poverty, rendered financially immobile by expensive public transit, low-paying jobs, and increasing gentrification exacerbated by the recent arrival of technology firms like Google and Facebook in the city.

Fortunately, the fight against poverty continues to press on in the form of charitable food banks, innovative public-nonprofit partnerships, and grassroots political advocacy. As an Emerson Hunger Fellow, I was paired with Just Harvest, a non-profit dedicated to ending hunger by connecting Pittsburgh residents to nutritional, affordable food. Part of the organization’s work involves providing one-on-one support for those applying for SNAP—still commonly referred to as food stamps—and securing healthy food options at local corner stores. Another part of Just Harvest’s work centers around grassroots anti-poverty advocacy at the local, state, and federal level. At most anti-hunger nonprofits, direct service and advocacy typically do not interact. However, Just Harvest prides itself on its ability to collaborate with people experiencing poverty. Throughout the nonprofit’s thirty-two year history, Just Harvest has worked with community members to successfully push for policies that improve food assistance programs and public transit.

So, where do I come in? Food stamp specialists at Just Harvest assist over one hundred new applicants a month with their SNAP application. These applicants range from those recently unemployed to those who suffer from chronic poverty. The Pittsburghers that Just Harvest serves know firsthand the importance of public assistance. So, my job entails turning that firsthand expertise into taking direct political action.

As a resident Emerson Hunger Fellow, I advocated an anti-poverty agenda at the grassroots level, primarily connecting Just Harvest’s food stamp clients with our organizing and advocacy efforts. My work included conducting focus groups and phone interviews with people who have used SNAP, starting advocacy recruitment efforts through the food stamp application process, and gathering insights from peer organizations on community empowerment.

Through my research I’ve identified several key findings. Many residents living with poverty and food insecurity want to take action. People with whom I spoke had even taken political action previously: they registered voters, participated in letter writing campaigns, and met with key decision makers to advocate for progressive policies. The interests of the people I interviewed are only reinforced by the number of food stamp applicants signing up for campaign events.

My other research concerns the ways in which organizations around the country build up the capacities of people with lived experiences of poverty to become leaders in the world of anti-poverty political advocacy. Community leadership programs are typically successful in developing the skills and abilities of low-income residents; from Oregon to D.C., the efforts of program participants have fostered improvements to state public assistance programs and diminished the complexity of the SNAP application. Even more promising is that many of these programs compensate low-income residents for their work through financial stipends, food, and transportation. Despite engaging in some great projects, grassroots organizing work suffers from a lack of dedicated funding sources. For leadership development programs to flourish, funders need to be willing to sponsor and support advocacy work at a community and local level.

Ending poverty, both in Pittsburgh and across the United States, requires people to identify and battle against economic injustices and fight for a stronger safety net. Too often those with lived-experiences in poverty are disregarded; too often they share their stories to lukewarm audiences with only minimal improvements to programs like SNAP. In the end, by elevating the voices of low-income people and investing in the leadership of people with lived experience, we can envision a world where no-one experiences hunger or poverty and then, take action. 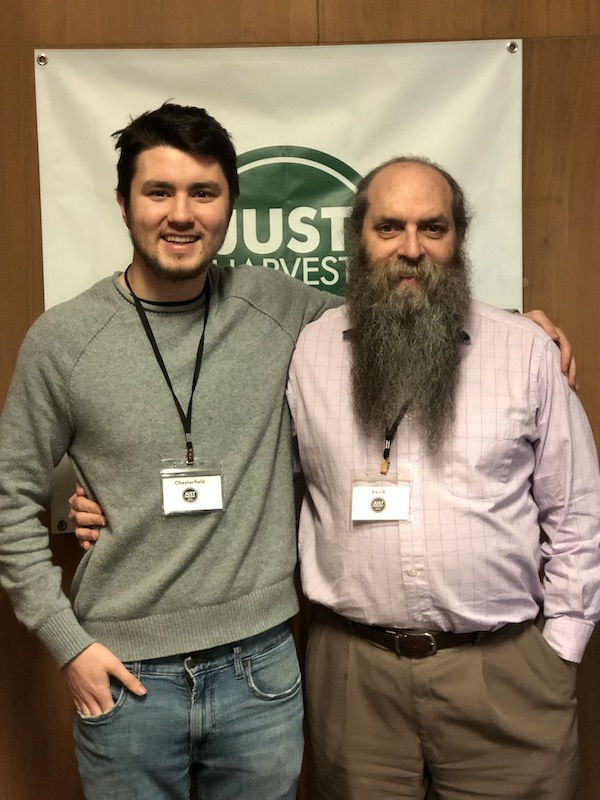 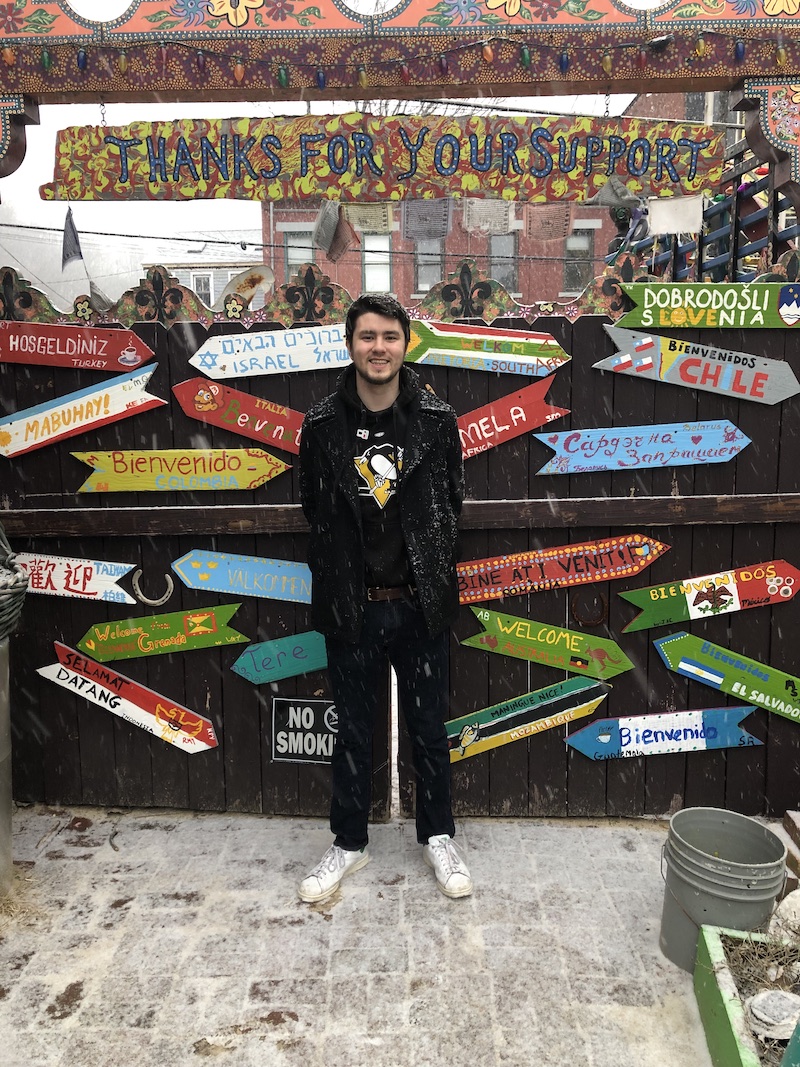 Chesterfield poses on a snowy day in Pittsburgh