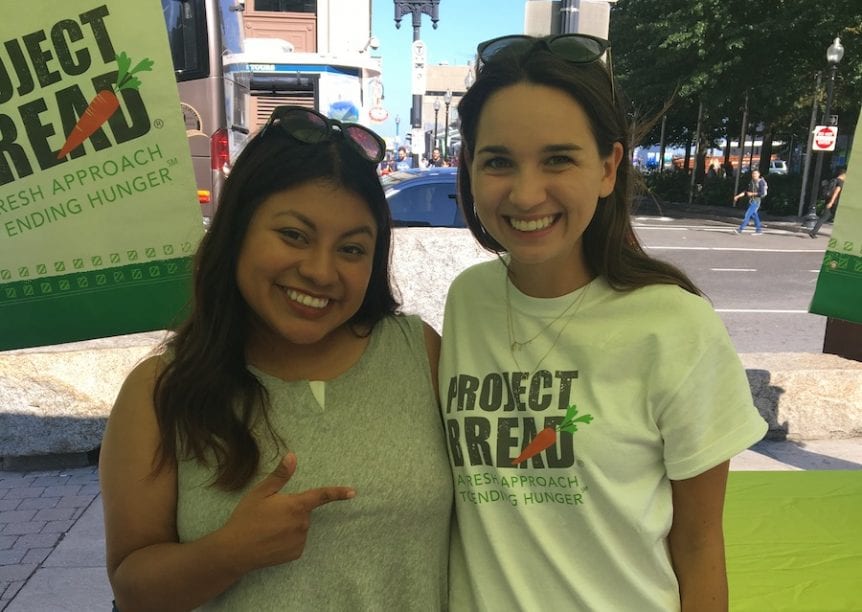 The capital of Massachusetts and the cultural and economic hub of New England, Boston hovers near the top of the list of America’s most expensive cities, driven in part by an expanding tech industry. Increasing costs of living bring increased hardship for households with low incomes: one in seven residents of Suffolk County experiences food insecurity according to Feeding America’s Map the Meal Gap survey. Working to address this inequality are organizations like the Massachusetts Law Reform Institute, which advances laws, policies, and practices that secure economic, racial, and social justice for low-income people and communities across the commonwealth, and Project Bread, a first-time partner with the Emerson program, which provides access to food for people who are hungry today while working to break the cycle of hunger through advocacy, education, and community action. Emerson Hunger Fellows Yesenia Jimenez and Courtney Colwell have been working with these organizations since September, 2018. Read on to hear how their projects are creating a future free from hunger for all Bay Staters. 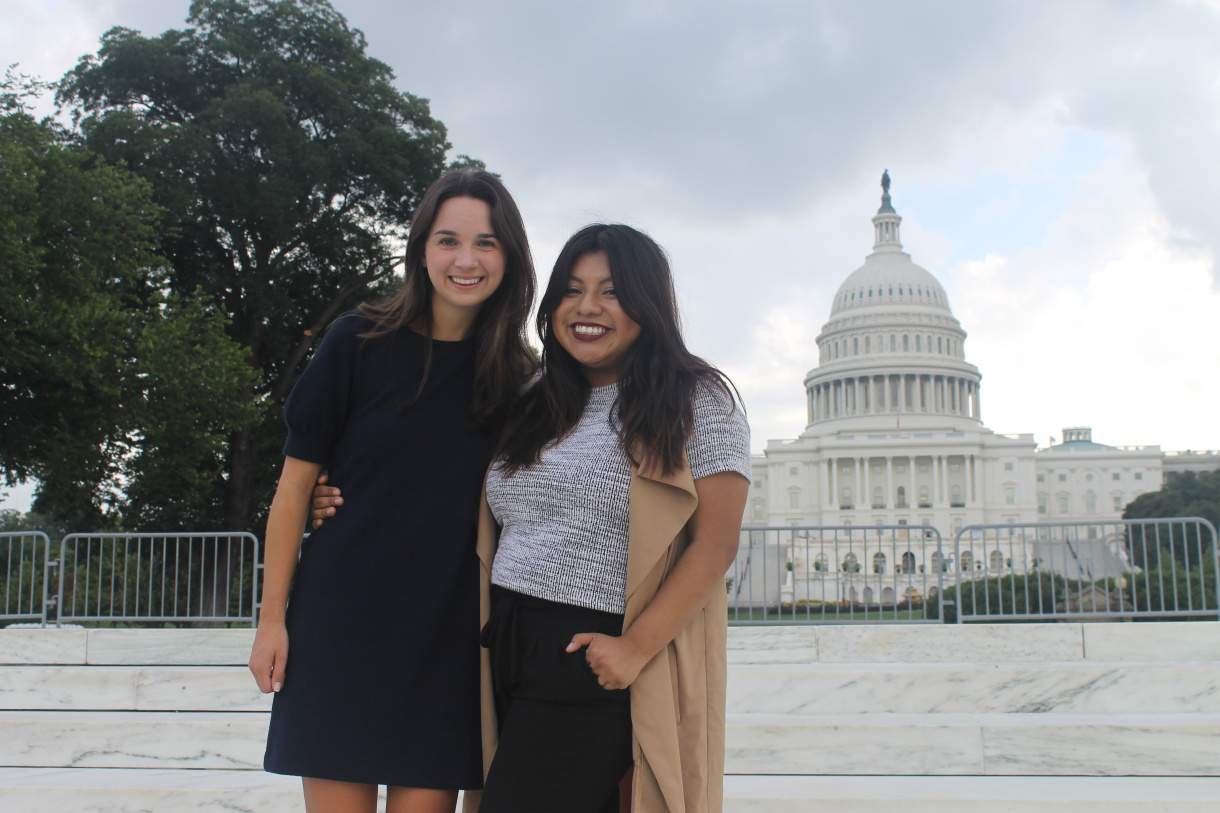 The commonwealth of Massachusetts is home to 1.1 million immigrants. Incredibly, not one nationality makes up more than 10 percent of the immigrant population in the Bay State. Nearly 36 percent of the immigrant population is made up of Dominicanos, Guatemaltecos, Salvadoreños y Brasileños. Although immigrants are a vital part of the community that makes up the commonwealth, it does not go unnoticed to me how immigrant familias and comunidades are disproportionately at-risk of experiencing poverty, and food- and housing insecurity, among a slew of other issues. Not lost in this narrative is the prevailing story of resiliency and self-advocacy found in the immigrant community, the power of community allyship, and the unrelenting work of community and statewide advocacy groups. As a Guatemalteca-Americana from Los Angeles, learning how to make Massachusetts feel like home has not gone without challenge, but it has been worth every effort!

As an Emerson National Hunger fellow, I currently serve with the Benefits Unit at Massachusetts Law Reform Institute. For 50 years, MLRI has been heralded as one of the nation’s leading poverty law and policy centers as a result of their groundbreaking litigation, innovative policy advocacy, and impactful community lawyering. Two weeks into my field work I learned that in 2016 our unit’s Senior Staff Attorney, Deborah Harris, along with Policy Advocate Vicky Negus, and Senior Policy Analyst Pat Baker, recovered over $9.4 million dollars from the state to go to 17,000 SNAP households who were wrongfully and illegally terminated as a result of an incorrect wage matching system. I simultaneously learned many of the staff at MLRI had been a part of incredible efforts that had substantially impacted the lives of under-resourced populations across the state and nation.

Initially, I felt very small being in the presence of policy and legal giants. I thought to myself, “what substantial impact could I possibly make in the next five months?” I learned to challenge myself not to feel “less than” because of my colleagues’ great achievements, but to be inspired by their accomplishments. The more I learned how my own upbringing and expertise made me more powerful, perceptive, and prepared to tackle the issues I took on, the more I began to understand the purpose and impact of my work. The most powerful manifestation of this truth came when I was invited by MAZON and the HOPE Lab center to share my personal story during the first U.S. Senate briefing on college student hunger. 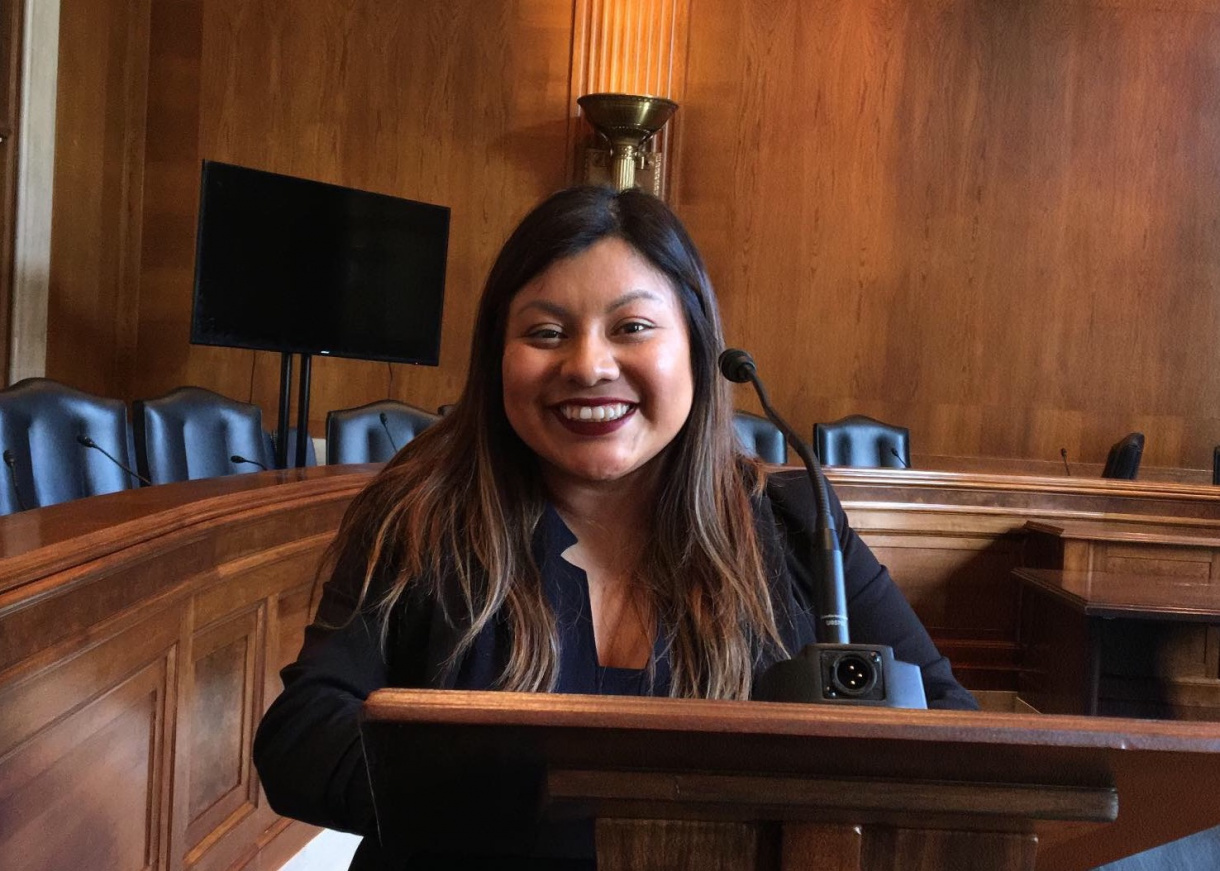 The important lesson I’ve learned from my field supervisor, or as I now call her “Mama Pat,” is to be intentional in shaping my advocacy efforts to be impactful beyond myself. As a fellow, it is important for me to acknowledge my placement is transient in nature and being invited into advocacy spaces is an opportunity to join existing efforts first established by community leaders. One of the ways I was able to accomplish this was through the scripting and production of a “Know Your SNAP Rights” video for Massachusetts college students. After sharing the video with college campus liaisons, I learned how the sharing of resources played an important role in reinforcing essential community relationships. By the end of my placement, I hope that my work will go on to be a resource campus liaisons can use to push for the establishment of SNAP EBT grocers on their campuses. In the remaining weeks I have with MLRI, my hope is to absorb much more policy knowledge from the experts I serve alongside, while also leaving my footprint of impactful change. 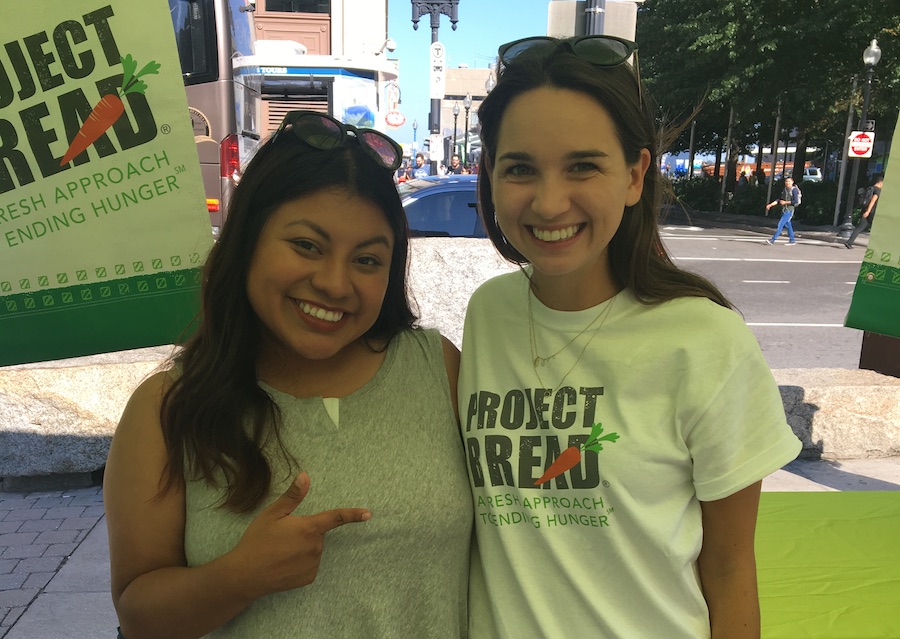 This past weekend Boston was hit by its first major winter storm of the season, leaving the city coated in a picturesque blanket of snow. As I walked to Project Bread this morning, I couldn’t help but ponder how beautiful—how magical, really—my new home looked. But as a gust of wind sent a shiver down my spine, I was also reminded that for many, winter creates a dilemma, forcing families to choose between high heating costs and keeping hunger at bay. Unfortunately, this type of trade-off, an impossible choice between material necessities, is all too common a predicament for the one in 10 families across the state of Massachusetts experiencing food insecurity.

As a Hunger Fellow at Project Bread, I spend a great deal of time thinking about these types of trade-offs. Indeed, both the Emerson Fellowship and my field site have challenged me to constantly think more critically about the systemic causes of hunger. In drafting a research brief on housing instability and food insecurity, for example, I was shocked to discover just how tight the connection between affordable housing and hunger is: that a $100 increase in median rent is associated with a 17.5 percent increase in the likelihood of food insecurity. This is particularly troubling given the state of housing in Massachusetts. With an annual household income of at least $59,571 needed to rent an average two-bedroom home, it comes as no surprise that 79 percent of extremely low income households are classified as cost-burdened.

This is just one startling example, but I could play this scenario out with any number of daily expenses which so often are forced to be sacrificed for food (and vice versa). From this perspective, the pathway to eradicating hunger does not merely come from more food. It comes from affordable housing, childcare, and healthcare—from living wages and racial equity. It comes from a real commitment to our lower-income families, ensuring that no mother or father ever has to make those impossible choices I spend so much time thinking about.

In the long-term, this commitment is certainly worth pursuing and one that the Action Team at Project Bread will continue to advocate to policy makers. But the mission of Project Bread is not solely to eradicate the systemic cause of hunger: rather, as one of the largest statewide anti-hunger organizations in Massachusetts, they are also committed to providing access to affordable, healthy food for those who are hungry today. 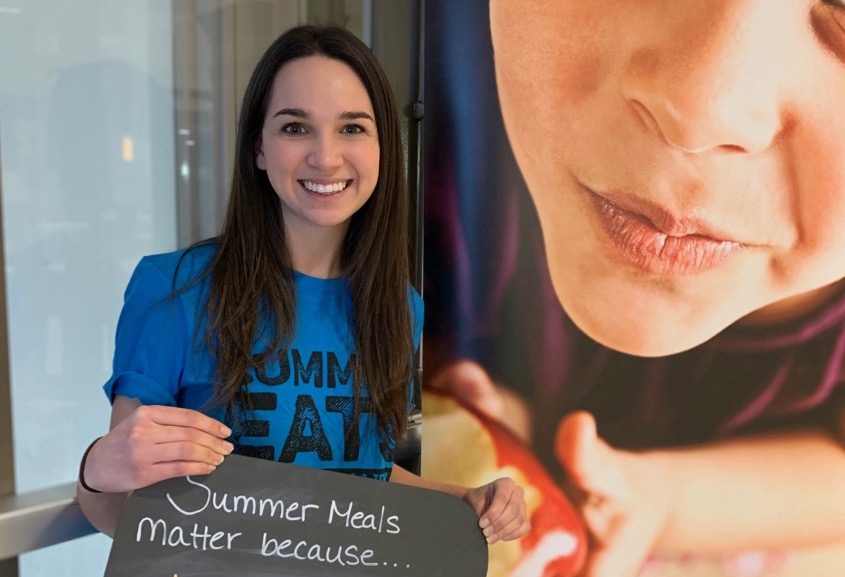 Week by week, I’ve spent the bulk of my days conducting research on these programs, determining how they operate, evaluating how effective they are, and identifying barriers to success. I’ve looked at how the state of Massachusetts has innovated across various child nutrition programs and evaluated best practices from across the country. Finally, I’ve spoken with Project Bread’s Child Nutrition Outreach Program team members and their Chefs in Schools to hear about the problems they see on the ground in schools across the state.

By mid-February, when my time at Project Bread has come to a close, I hope to have completed a comprehensive report on America’s child nutrition programs, including suggestions on how our programs can be improved. To be clear, there is much that our child nutrition programs do well. We know, for example, that the School Breakfast Program can reduce the likelihood of food insecurity by over 15 percent. However, we also know that access to and participation in the School Breakfast Program remains chronically low when compared to participation levels in the National School Lunch Program. In fact, for every 100 students who participated in the NSLP in school year 2016-2017, just 52.7 free and reduced price students participated in the School Breakfast Program in Massachusetts. I’ll further explore this and other gaps in the child nutrition programs in my final report.

Ultimately, I’m excited by both the longer-term solutions I’ve researched through my systemic causes briefs, and the shorter-term fixes I’ve come up with for child nutrition programs. But, as my work with the Action Team has demonstrated, research can only take us so far. Policy change requires relentless pressure. If hunger is a problem caused in part by a lack of political will, then it is up to all of us to be our best anti-hunger advocates each and every day.