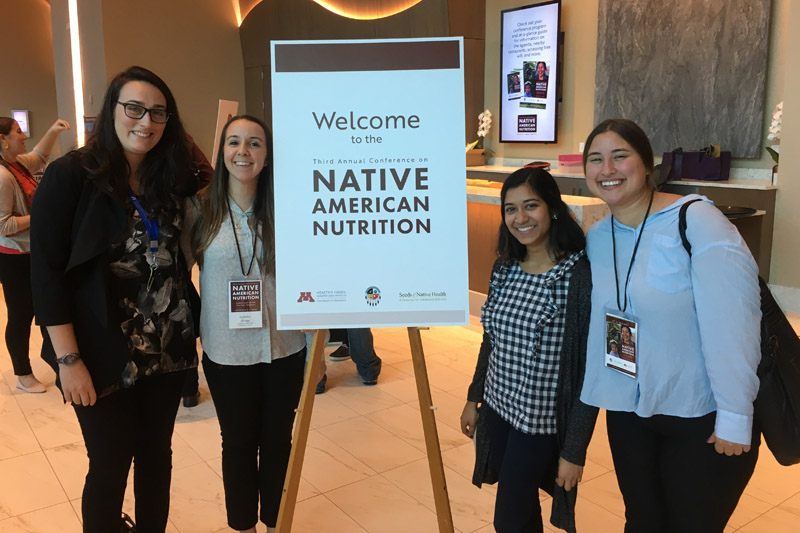 Nearly one in four households in Native American communities experience food insecurity, about double the rate of the average of all U.S. households. For households with children, the rate is higher still. These high rates of food insecurity are tied up with lower-than-average incomes, poorer health, and fewer opportunities for economic advancement, and all are attendant on centuries of racial discrimination and disenfranchisement.[1]

The Indigenous Food and Agriculture Initiative, a project of the University of Arkansas School of Law and a two-time Emerson field site partner, is working to improve health and well-being in Tribal communities by advancing healthy food systems, diversified economic development and cultural food traditions in Indian Country. Read on to see how Emerson Hunger Fellows Alekya Prathivadi and Shelli Grogg worked with IFAI on projects ranging from support for traditional foodways to legal empowerment for Tribal food producers… 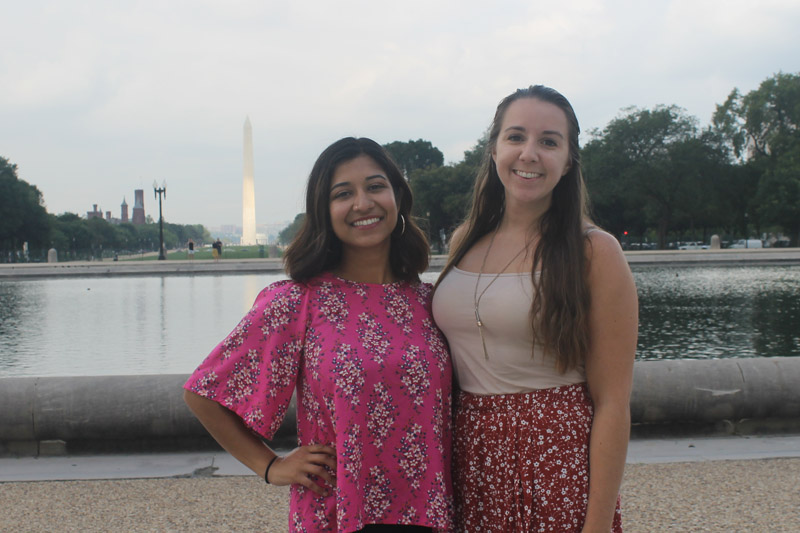 Located at the University of Arkansas in Fayetteville, the Indigenous Food and Agriculture Initiative sits on land that was once home to the Osage and Caddo peoples (according to this handy tool). Today, there are no federally-recognized Tribes or Indian reservations in the state of Arkansas. Nevertheless, IFAI is the nucleus for strategic and technical assistance to Tribes working towards stronger economies and traditional food systems. IFAI’s focus is nationwide, which has made for an unorthodox field site experience. Rather than working on issues regarding the immediate community of Northwest Arkansas, our work has spanned numerous states and diverse groups of people. This experience has given me a deeper understanding of hunger and inequality in Native American communities, rooted in the effects of colonization and separation from lands. On the other side of these issues, I have also witnessed the knowledge, strength, and determination of Indigenous peoples.

The removal of Native Americans from their homelands over the past few centuries has disrupted traditional foodways and forced people to rely on high-calorie, low-nutrient alternatives. The drastic change in Indigenous diets has resulted in many of the health disparities that exist in this community today. Type II Diabetes, for example, is a disease that was almost unknown in Indigenous communities less than 100 years ago. Today, it is one of the top causes of death for Native Americans.

My work has focused specifically on the nutritional value and health benefits of traditional Indigenous foods. My Hunger Free Community Report is a literature review of research conducted on this subject. The health disparities mentioned above may be alleviated with the reintroduction of traditional foods into the diet, which have a variety of preventative qualities. These foods vary from region to region, but the reemergence of Indigenous preparation and consumption of traditional foods after historical displacement has proven to be a pathway to rebuilding Indigenous health and welfare. Increasing consumption of traditional foods is just one component of food sovereignty, the larger overarching theme of my fieldwork. Food sovereignty, simply put, is the right to healthy and culturally appropriate foods. In the context of the Native American population food sovereignty includes control of land and resources, the use of Indigenous knowledge regarding nutrition and ecology, and support for local producers.

IFAI is just one of the many organizations working towards food sovereignty. Over the past five months, I have had the opportunity to attend a variety of events and conferences where I have heard stories from Tribal members and leaders regarding food, nutrition, and agriculture. These experiences, in combination with the work that I have done, have given me insight into the unique needs and challenges in each community as well as the cultural diversity that exists among Native Americans, a population that is often conglomerated. Aside from what I learned in my public school education, which unquestionably left out important details about Native history, I arrived at my field placement with very little knowledge about Indigenous food systems. My time at IFAI has given me the opportunity to further educate myself about how hunger presents itself across the country and how to be a better ally when crafting solutions. Being a leader is a constant process of growth and learning. Serving as an Emerson Fellow has been one of the most transformative and educational experiences I have had so far.

Going forward I hope that my work will be a testament to the value of traditional foods and a resource that will provide evidence for increasing consumption. Provisions in the most recent Farm Bill have clearly dictated support for traditional foods and the outlook for the future is bright. With many organizations advocating for changes in the Farm Bill as a way to support Native agriculture and economies, the movement towards food sovereignty is getting stronger every day. Though my piece in this has been small, I am grateful to have learned so much from this community and hope to amplify the knowledge that I have acquired as an advocate for equity and food justice. 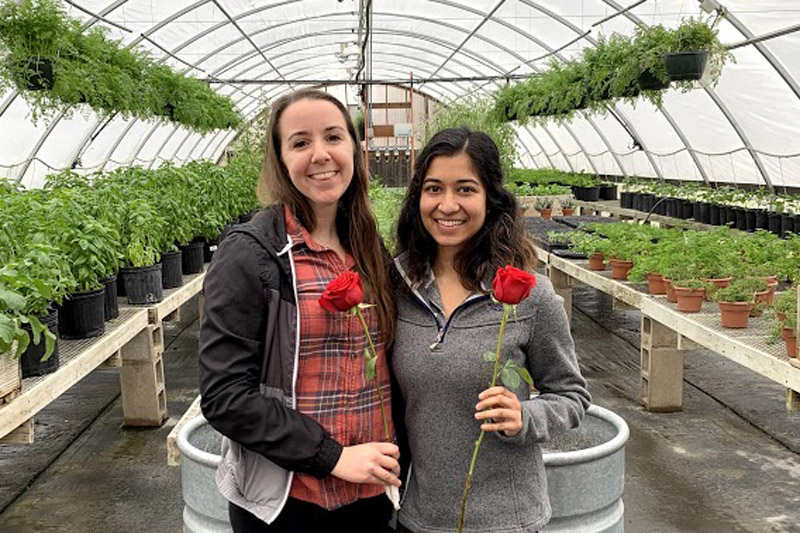 Shelli and Alekya at the Quapaw Tribe’s greenhouses, used to produce food for Tribal members, in Quapaw, Okla.

In the past few months I have come to call Northwest Arkansas home, but my work at the Indigenous Food and Agriculture Initiative has been focused all across the country. IFAI works with Tribes throughout the United States to help them strengthen their food systems. Some of the roles they fill include acting as the educational arm of the Native Farm Bill Coalition, helping farmers and ranchers be in compliance with food safety regulations, building Native youth leadership, and creating a model food code for Tribes to use as a template in creating laws that protect their food and producers. All the exposure I’ve had through IFAI’s work in Native food systems has shown me the incredible strength, resilience, and promise in Native communities all across the country. While there are of course challenges to be overcome—low access to grocery stores and fresh food, minimal credit opportunities for Native farmers and ranchers, and high rates of diet-related diseases, to name a few—there is so much promising work being done to advocate for solutions that work.

More than anything, though, my work at IFAI has helped reinforce an idea that we initially talked about during our first weeks of training at the Congressional Hunger Center—The Danger of a Single Story, a TED Talk from Chimamanda Ngozi Adichie that centers around the idea that we create blind spots for ourselves when we oversimplify groups of people. This has come to be my most important lesson from my time at IFAI, because, of course, there is no single story for Native communities. Though we most often talk about Native Americans collectively, grouping them together because of their shared indigeneity to the land and similar history of colonization and its lasting impacts, this is far from a homogenous population. Every Tribe has vastly different needs, strengths and priorities – from their unique history, origin story, culture, language, traditional food and other facets that shape their identities. The programs Blackfeet Nation might need to support bison ranchers may not apply to a reservation where 60% are enrolled in federal feeding programs. What works for the Menominee forests may not apply to the Iñupiat in remote areas of icy Alaska.

Since there is no single story there is also not a top-down, one-size-fits-all strategy for addressing food insecurity, nutrition, or sustainable agriculture across all of Indian Country. This means it’s important that each Tribe has the opportunity to design these approaches for themselves. Trusting communities and empowering them with the tools to create solutions tailored to their needs feels paramount to enabling success. One of the tools to facilitate empowerment is 638 authority, the subject of my report I have spent the last few months writing for IFAI. The Indian Self-Determination and Education Assistance Act, also known as Public Law 93-638, allows Tribes to enter into flexible contracts and compacts to control different programs, services, functions and authorities of federal agencies. This transfer of control is often referred to as “638 authority.” Ultimately, 638 authority gives Tribes the ability to design programs in ways that are best fit and responsive to their communities’ specific needs.

The passage of the 2018 Farm Bill authorizes pilot projects of 638 authority for two specific US Department of Agriculture programs: Food Distribution Program on Indian Reservations (FDPIR) and Forestry. My report explores how 638 authority works, its legislative history, how it’s been successful in the Department of Health and Human Services and the Department of Interior, and its potential in the USDA. Control over food systems could hold the key to improving health, revitalizing culture, economic development, and creating thriving communities across Indian Country. Expanding 638 authority to the USDA allows for Tribes to not only address present problems in their communities, such as food access, health disparities, and unemployment, but also to capitalize on the under-tapped potential in Native agriculture and food production.

I hope that this report, and other educational materials I have provided to IFAI, will be helpful in educating others on the latent potential of Native producers, the unmet needs in Indian Country, and the importance of 638 authority and other tools available to Tribes to enabling them to create healthy and thriving communities. However, I know that I will be leaving more confident that I can make sure Native Americans are not forgotten in conversations about equity and justice. I’m thankful this placement helped me be less prescriptive of how I think change should look, reminded me to trust communities to know what is in their best interest, and reinforced the idea that there is no single story that can capture the diversity amongst and within groups of people.