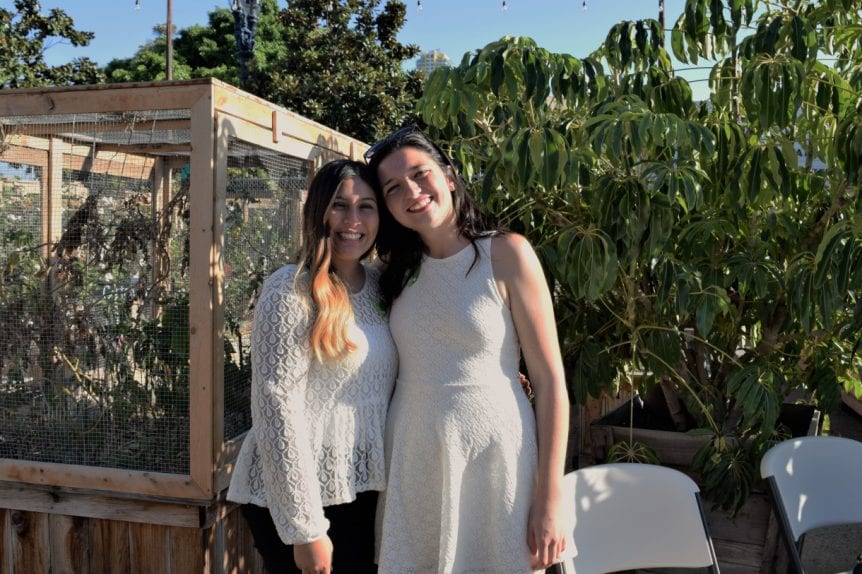 Continuing with our series of Field Site Spotlights for the 24th Class of Emerson National Hunger Fellows, we turn to San Diego, California, where fellows Rosa Rada and Valery Martínez have recently finished their placements with the San Diego Hunger Coalition. Rosa and Valery’s work brought them in close communication with area residents, whether they were collecting first-hand stories from students experiencing food insecurity, or talking with community leaders on how they could play a role in expanding federally-funded summer meals in their neighborhoods. Read on to hear about the state of hunger in San Diego…

After years studying and working on food justice in Baltimore, I was eager to broaden my understanding of food issues beyond the northeastern rust belt. In Baltimore, less than 4% of the population is Spanish-speaking—which meant that I virtually never encountered Spanish speakers in my work. Growing up, I had taken Spanish classes in underfunded Baltimore schools, where survival was a lot more important than practicing verb tenses. Given that learning Spanish and understanding Latinx issues seemed especially crucial in American life today, I hoped that the Emerson Program would send me southwest.

My wishes were granted—I would be moving to San Diego, California, to work at the San Diego Hunger Coalition, an organization that leads coordinated action to end hunger through research, education, and advocacy. I took this news as a green light that I should spend my summer trying to revive dormant Spanish skills through immersion in a Spanish-speaking country. The 1.5 months I spent doing a work exchange in rural Colombia were wildly challenging, but some kind of magic. The time I spent with my adult English-students-turned-friends was the closest to God I’ve ever felt through other human beings.

Naively, I assumed that my time in Colombia would be a natural segue to my life in San Diego: that there would be boundless opportunities to practice Spanish and continue learning about Latinx culture. But, like most American cities, San Diego is heavily segregated along lines of race, class, and country of origin. Often, it feels as if residents live in two separate worlds. After five months here, my sense is that one San Diego, at its roots, is a working-class military town and year-round tourist destination, flush with real estate money. The other San Diego is a vibrant hub of refugees, immigrants, and people experiencing homelessness.

My work at the San Diego Hunger Coalition has centered around measuring the impact of various anti-hunger interventions in San Diego County. This has involved both quantitative and qualitative research. My qualitative storytelling work has taken me to high schools near the border to hear about students’ passion for gardening, to community colleges and state universities to hear about the often invisible challenges of student hunger, and to food pantries to hear about trust and dignity. Oftentimes, collecting these stories required hours-long bike rides or public transit journeys, exposing how difficult it is for San Diegans to navigate this massive, sprawling county if they do not have a car.

I believe in storytelling work. Too often education, research, and advocacy efforts on behalf of people facing hunger neglect to include the voices of those who actually experience hunger. Quantitative data is powerful, but infusing human life into data gives it a pulse. Launching this storytelling work virtually from scratch has been a rewarding and humbling experience: developing consent forms and questions, making use of my amateur photography skills, and navigating sensitive spaces has required a great deal of contemplation and course-correction.

My most cherished work in San Diego, however, is work that I wasn’t initially assigned, but welcomed out of a desire to spend more time working directly with community members. I have been working with a partner organization, Home Start, to support their CalFresh application efforts and gather data on thematic case issues. I was initially supposed to do a mix of shadowing and data-tracking, but, in my perpetual restlessness, decided to jump in to assist with applications themselves. On the day that statements about Haitian and African immigrants were seething through national media, I was in Home Start’s office helping a Haitian man apply for CalFresh in Spanish.

Since most of Home Start’s clients are refugees, immigrants, or speak languages other than English, my work there has provided insight into the unique challenges that these clients face in applying for federal food assistance. While it has been maddening at times and heartbreaking at others, it has done nothing but underscore that federal food assistance programs are essential to sustaining lives.

While San Diego, to me, isn’t the sunny paradise that I understand it is for others, many things are flourishing in this desert. I found incredible female mentors, two of whom I worked with to plan and host an event on sex positivity for women in San Diego. I found opportunities to use my Spanish skills and learn about the challenges and realities that are unique to this borderland. I found a diverse interfaith community where I could further grow in my understanding of what it means to do justice work from a faith perspective. I found solace in biking—whether it was spinning through calm, dewy ocean air on my daily commute or spontaneous rides to Mexico.

In a few weeks, I will begin working at the National Conference of State Legislatures, specifically on immigration and hunger policy. With my time in San Diego coming to a close, I am enthusiastically looking forward to using the knowledge and insight I’ve gained here to inform my work in Washington D.C. 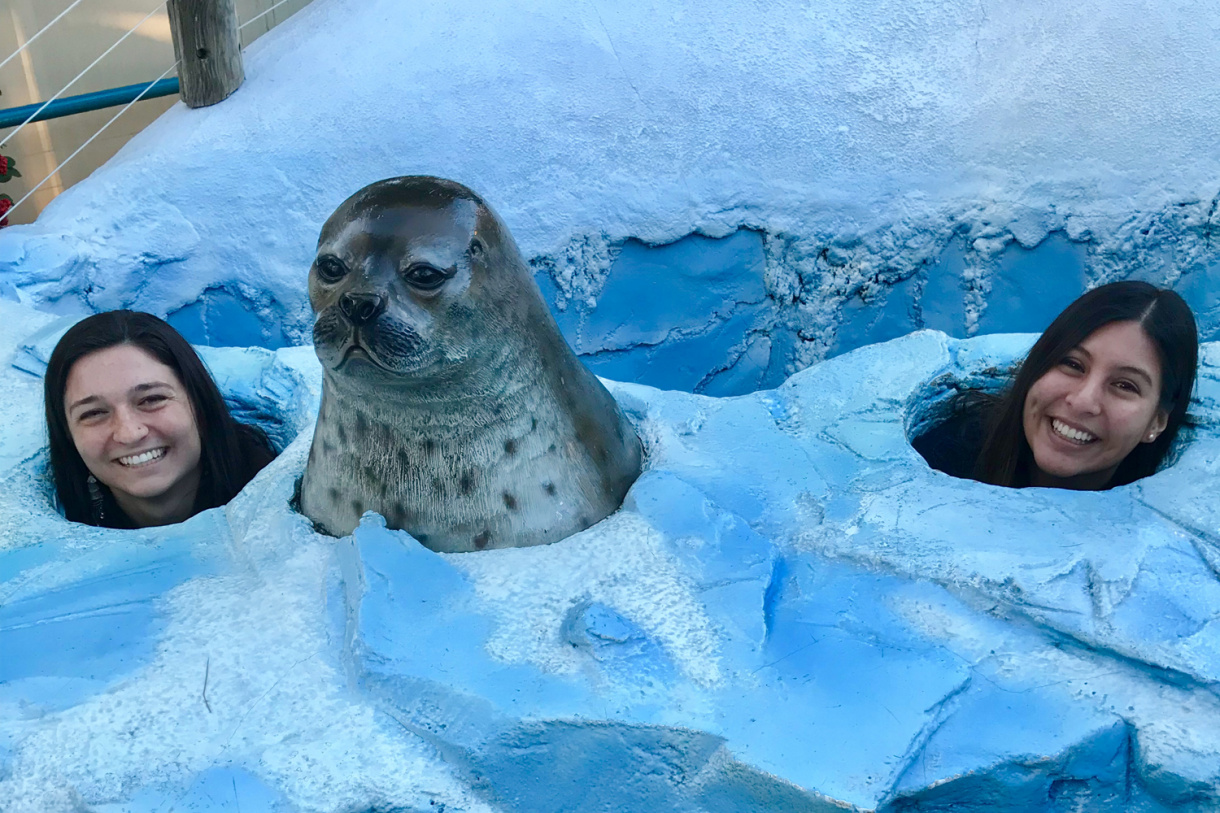 After spending the last four winters shivering in upstate New York, I was ready for San Diego’s warm embrace. Upon arrival, San Diego greeted me with iconic palm trees, glistening waters, and radiant scenery. I thought I had found my beach paradise.

But it wasn’t long after I pulled out my sunglasses that I was able to see past the sun’s dazzling effect.

Beyond the laid-back vibe of this attractive city lie issues that were both familiar and yet unfamiliar to me. Sunny San Diego is no exception to wealth inequality, health disparities, and racial issues that manifest through high rates of homelessness, hunger, and gentrification. Yet, any attempts made to resolve these issues must first address factors that are unique to the city, such as its geographic proximity to the border, and being home to a large refugee and veteran population.

Through my field site placement at the San Diego Hunger Coalition (SDHC), I have been able to further explore these unique factors, how they interact, and their overall relation to child hunger. At SDHC, I work with the School Meals Director to help expand youth meals throughout San Diego County. My first few months consisted of learning the federal and state regulations surrounding Child and Adult Care Food Programs (CACFP) and Summer Food Service Programs (SFSP). On a more local level, I had the opportunity to meet with school officials, non-profit representatives, and community leaders at monthly task force meetings to discuss the challenges and successes of these programs. My knowledge of these programs has grown immensely since early September, but perhaps the most rewarding learning experience has been getting to know the community in San Diego County.

My trips to Oceanside, California, have allowed me to see the importance of youth meals and their relation to community empowerment. The city of Oceanside, thirty-eight miles north of San Diego, has struggled with gang violence in the past. As a result, Oceanside Community Safety Partnership—a partnership between police officers, school officials, social service agents, and program coordinators—has expanded afterschool programs to attract youth and keep them away from potential danger. Community leaders have found that one of the best ways to attract and retain youth is by serving free meals through CACFP and SFSP. The beneficial effects of these free meals extend beyond the immediate relief of calming hunger for an hour or two; they also strengthen and unify a community in the fight against child hunger and community violence. Another incredible example of community empowerment is the recent addition of halal foods into a high school lunch program. With a large Muslim population residing in San Diego’s City Heights neighborhood, the community— students, parents, and community organizers— advocated for culturally appropriate foods to be part of the school menu. This example shows that it’s not only important to have meals, but to have the right type of meals.

Inspired by the communities in Oceanside and City Heights, I decided that my project’s purpose would be to further empower local communities. More specifically, the Community Champions Guide that I am creating is a step-by-step guide designed to help community members connect to their local afterschool or summer programs, and further link these programs to CACFP and SFSP in order to serve free meals to youth who are at risk of experiencing hunger. The Community Champions Guide integrates input from parents, students, and community leaders to ensure that it is user-friendly and community driven. The guide will supplement existing toolkits for organizations and agencies interested in becoming CACFP or SFSP meal sites or sponsors. Together, these toolkits will accompany SDHC’s Hunger Free Kids Report, a first-of-its-kind analysis of the region’s implementation of federally funded child nutrition programs by both school districts & nonprofits.

As I near the end of my field site placement and reflect on my experiences, I realize that San Diego has exposed me to issues beyond those of child hunger. I have been inspired by the activism that surrounds Barrio Logan—a primarily Latinx and Chicanx neighborhood—that continues to fight against institutionalized racism and discrimination. I have felt the wave of fear and uncertainty that immigration raids have caused in local groups and individuals. And lastly, the communities of City Heights and Oceanside have humbled me through their tireless work and consistent advocacy for their youth. Upon this reflection, it dawned on me that the warm embrace I was hoping for didn’t come from the sun; instead, it came from San Diego’s most active and passionate communities.