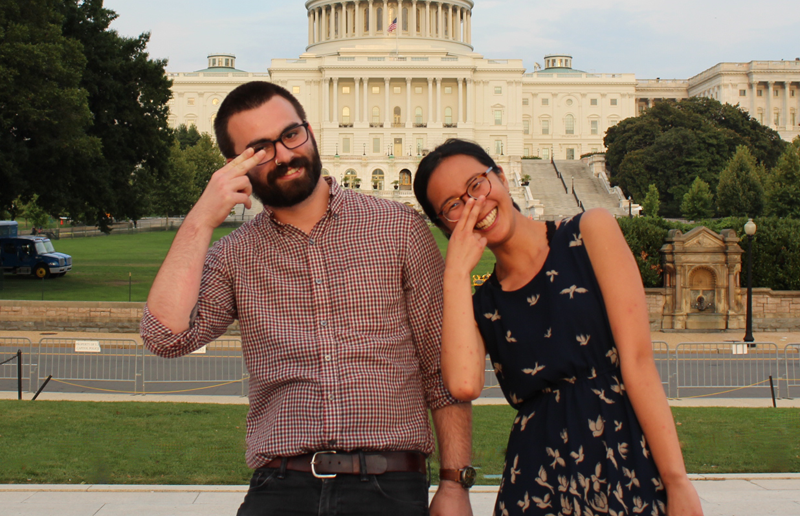 As we conclude our series of Field Site Spotlights for the 24th Class of Emerson National Hunger Fellows, we turn to the city of Philadelphia, Pennsylvania. According to Feeding America’s Map the Meal Gap survey, Philadelphia has a food insecurity rate of 21%, which is the highest in the state. Philadelphia has been the home for Emerson Hunger Fellows Alex Boyd and Maggie You Ming Tsai serving with Philabundance and Reinvestment Fund. Read on to learn about their impressions about the most populated city in Pennsylvania and their experiences fighting against hunger.

For my field site placement I worked with Philabundance, the largest hunger relief organization in the Delaware Valley region. Philabundance reaches over 90,000 people each week through their network of partner agencies, meaning food pantries, soup kitchens, shelters, and other social service organizations, across nine counties in Pennsylvania and New Jersey. Beyond distributing food, both directly and through their network, Philabundance opened and operates the country’s first non-profit grocery store, Fare and Square, and runs a culinary vocational and life skills training program, Philabundance Community Kitchen, aimed at improving the lives of people experiencing poverty in the area.

Becoming familiar with the political and cultural landscape of a city with as rich and complex a history as Philadelphia’s is a monumental task. If I were to walk down the street and ask three different people what neighborhood I was in, I’d probably get three different answers, each a result of a complex equation factoring in how long they’ve lived there, their socioeconomic and racial background, and who I am. After six months, I feel as though I barely scratched the surface of understanding the neighborhood where I lived, and I could probably live there for another ten years and feel the same. Out in the counties surrounding Philadelphia, which also fall within Philabundance’s service area, the landscape is just as nuanced, with a patchwork of suburbs and rural areas facing issues that are drastically different not only from those in the city, but also from each other.

My task was to work with Philabundance’s network of partner agencies across this region, with the goal of increasing the network’s advocacy capacity. There are many ways to engage in advocacy: a person could devote their whole life to becoming a professional advocate or lobbyist, or a person could make a single phone call to an elected official every few months about an issue they have a personal connection with. Both of these hypothetical advocates have the potential to impact policy through organizing and sharing their thoughts with elected officials. My work involved people all along the spectrum, from first-time advocates to career professionals.

Through my time spent meeting with folks in the community, I learned that there’s not one big boundary to advocacy participation, no one issue that everyone agreed prevented them from advocating, no single problem we could solve to get people to call or write to their representatives, or organize a demonstration, or speak up about hunger in their communities. Advocacy barriers are much more like a series of filters, each one preventing some portion of people from advocating. Each barrier, even something as seemingly small as not knowing the address of an elected official’s office, prevents some number of people from having their voices heard. These barriers compound, and the end result is that a broad base of potential advocates can be whittled down to a small number by just a few minor obstacles.

My work at Philabundance was centered on addressing as many of these smaller barriers as possible through the creation of an advocacy toolkit tailored to the needs of the network. I worked with several organizations across Philabundance’s service area to create a feedback loop of community input on the project. By working with these different community groups, I compiled a document that covers topics from base-line advocacy 101, to developing an advocacy framework within a nonprofit organization.

Perhaps the problem of access to advocacy would easier to overcome if it were caused by one big barrier that you could shatter, allowing everyone to be strong and effective advocates, but I found a different kind of practical satisfaction in realizing that the complexity of the issue meant that there were many smaller pieces of a larger issue that I actually had the power to affect.

The work that I did at Philabundance, the gradual chipping away at a series of small barriers, felt reminiscent of anti-hunger efforts as a whole. There’s no single solution to food insecurity or poverty, no single wall to knock down, and to do this kind of anti-hunger work effectively necessitates bringing together people of diverse backgrounds and skill sets to bring down these barriers.

I am hopeful that the work that I did in Philadelphia will amplify the voices of a few more people with direct knowledge of hunger and poverty, and will help to foster a growing culture of advocacy among anti-hunger advocates. There’s so much more work to be done to encourage grassroots advocacy among people with lived experiences of hunger and poverty, but I think we’re on our way there.

As an immigrant raised for much of my life in the western half of the United States, I learned about the story of Philadelphia through dusty history textbooks. If you had asked me to describe Philly prior to my field site placement, I would have mentioned Independence Hall, cheesesteaks, and of course, Benjamin Franklin and his wacky contraptions. Although I consumed many cheesesteaks (extra ‘wiz  and onions!) and visited historical monuments, the city of brotherly love welcomed me to a community that does not dwell on its past but uses that knowledge to encourage solidarity for social change.

Unlike my history textbooks, the story of Philadelphia is a vibrant story of people and place. While the city faces major challenges like rapid gentrification and one of the highest poverty rates among large metropolitan cities, Philly uses creativity to take on these issues. In my neighborhood, there are colorful murals and stories of resistance from immigrants, people of color, and families from all communities. This idea of community embedded into place clearly drives the mission of Reinvestment Fund, where I worked during my field site placement. Reinvestment Fund is a federally certified community development financial institution (CDFI), a non-profit loan fund whose mission is “to integrate data, policy, and strategic investments to improve the quality of life in low-income neighborhoods.” Although the organization’s history and roots are in Philly, Reinvestment Fund serves communities across the country, including neighboring states.

To achieve that mission, Reinvestment Fund takes a multi-sector approach to community development. I worked alongside colleagues with expertise in child care, healthy food access, sustainable energy, housing, and healthcare. My supervisor, an Emerson Hunger Fellow alum, often reminded me that social movements need organized people, data, and capital to sustainably and effectively create change. Reinvestment Fund’s role is to bring these ingredients together and to act as a coordinating body to channel human and financial resources.

During my time there, I worked within Reinvestment Fund’s interstitial spaces, bridging Reinvestment Fund’s work between healthy food access and childcare, linking research to the organization’s lending strategy. My primary projects were related to two federal programs: the Child and Adult Care Food Program (CACFP) and the Healthy Food Financing Initiative (HFFI).

For my first project, I researched opportunities to expand and enhance CACFP in New Jersey, listening to childcare providers, sponsors, meal vendors, and state agency representatives on their lending and technical assistance needs. Through these interviews I learned that policies are often designed without considering the administrative burden of the end user. Specifically, CACFP supports healthy childhood development and fights hunger, yet is an incredibly complicated program, both to participate in and to administer. In New Jersey, it takes a network of savvy community leaders and business owners committed to their community to navigate these complexities and serve children healthy, culturally appropriate meals.

While my first project focused on a specific locality, my second project took a broader focus. Reinvestment Fund has had a decade of experience pioneering healthy food financing, which has evolved into state and federal programs to finance grocery stores, healthy corner stores, food hubs, and food incubators to bring healthy, affordable food to food deserts. This experience has led them to be named the National Fund Manager for the USDA Healthy Food Financing Initiative (HFFI). For this project, I conducted interviews with food access project practitioners, CDFI loan officers, and USDA representatives to identify strategies and promising projects related to rural and Indian Country food access. Their expertise and insights were used to inform Reinvestment Fund’s strategy in rural communities.

Living in an urban setting while researching initiatives in rural areas, I was challenged to rethink my perception of a cultural divide between country and city, and was inspired at the range of activities that communities across the country engaged in to ensure healthy food for their members. Through these conversations, I hear stories of collaborative resistance to disinvestment in rural and urban places. From our partners in Indian Country, I hear of investments in youth and in food sovereignty. From rural communities, I hear of solidarity between farmers and immigrants. The following weekend at a gathering with Philadelphia Assembled, an art and civic engagement initiative, I hear, for the first time, of my own community, the Asian-American community, of our own grassroots food sovereignty movement. These stories reaffirm the diversity of experiences and self-determination needed to ensure food justice for communities whose voices have been traditionally excluded from mainstream social movements and place-making.

Navigating the world of community development finance for the past six months has not only allowed me to dive deep into the slightly wonky world of finance, but also hear narratives across multiple realities and places. Philadelphia, the city of brotherly love, not only challenges our conception of which strategies are achievable in the fight against poverty and hunger, but also challenges our perceptions and the narratives we weave about people and place.

[1] “Birds” is an affectionate nickname for the Philadelphia Eagles, the city’s NFL franchise who celebrated their first-ever Superbowl victory during the fellows’ placement.