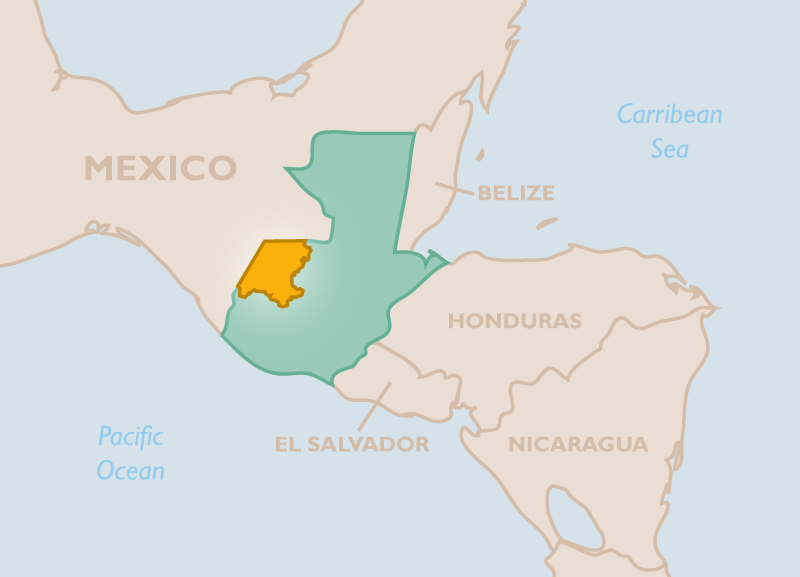 Guatemala is the most populous country in Central America, as well as one of the most impoverished. The population of Guatemala is growing, driving up demand for food; meanwhile, climate change threatens future harvests, creating risk for shortages and crises. Will improvements in agricultural productivity alone be enough to overcome these challenges—or should the development community consider new approaches to solving the problem?

Project Concern International (PCI) is a global development organization that drives innovation to enhance health, end hunger, and overcome hardship, and has worked in Guatemala since 1974. Leland Hunger Fellow Brandon Hugueley is partnering with PCI in the Huehuetenango department of Guatemala’s Western Highlands. Read on to hear about his research into methods of addressing food security through family planning and the empowerment of women.

Map, above: the department of Huehuetanango in Guatemala.

“There isn’t just one singular path forward, but many.”

Having been placed with Project Concern International in Huehuetenango, Guatemala, I was tasked with surveying the existing literature and conducting original research to identify pathways for improving food security throughout the region. While nutritional, agricultural, and WASH (WAter, Sanitation, and Hygiene) interventions may be the first things that come to mind for many working within food security, in truth, food security is such a broad and complex topic that, as I’ve learned this past year, it is difficult to find something that doesn’t play a role in either promoting or obstructing food security and its downstream effects. This complexity makes work within food security difficult, but for those willing to embrace the complexity, it also represents opportunity, as there isn’t just one singular path forward, but many. 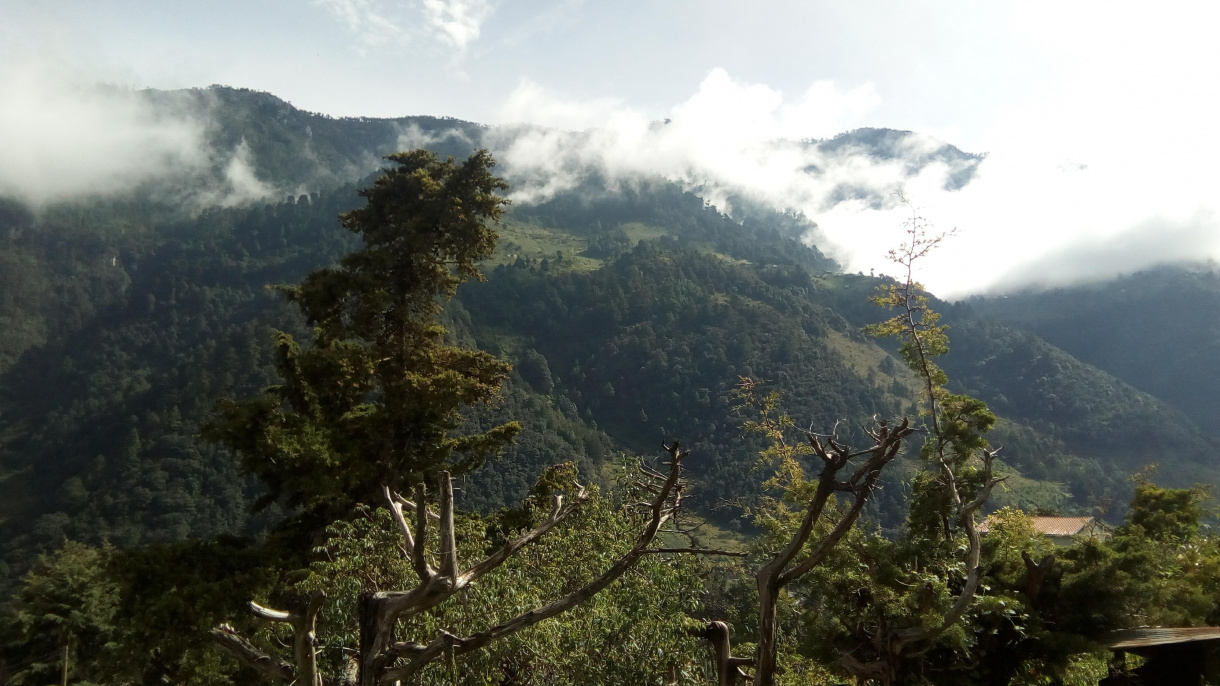 A view of the mountains of the department of Huehuetenango, from the town of Todos Santos. Photo: Brandon Hugueley

With this in mind, my research into how to promote food security within Huehuetenango ended up taking the form of investigating the lack of adoption of family planning methods to prevent or delay pregnancy. If you’re confused how family planning relates to food security, allow me explain.

According to the Global Food Security Index, Guatemala ranks 73rd out of a total of 113 indexed countries globally and 16th out of 18 indexed countries within the Central and South America region, with only Honduras and Haiti ranked lower[3]. As a testimony to the level of food insecurity found in Guatemala, 46.5% of children under the age of 5 are stunted or suffer from chronic malnutrition[1], the highest level in the region of the Americas and the 6th highest prevalence of stunting in the world[1,2].

“Those with the least must provide for the most.”

These problems are exacerbated by an increasing demand for food for an ever-growing population. Despite a steady decrease in Guatemala’s Population Growth Rate and the Total Fertility Rate over the past few decades, and a projected continued decrease over the coming years, both rates still remain high. The United Nations projects Guatemala’s population will grow from 16.7 million to 27 million by 2050, an increase of approximately 62%[1,3,4,5,6].

This fast-growing population is a challenge to addressing food insecurity. A growing population means more mouths to feed, and the populations that have the highest Total Fertility Rate are also the populations least able to provide economically for larger families; ultimately, those with the least must provide for the most[1]. As a result, poverty-stricken families spend a larger percentage of their income on food, yet spend less money on food per capita than higher income families[7]. Not only does this contribute to individual and household-level food insecurity, it also means fewer resources to send children to school and less of a chance for those caught in the cycle of poverty to escape its grasp.

With projections for a temperature increase in Guatemala of 2°C–2.5°C by 2050 and a reduction in rainfall during the primary growing season, climate change is expected to make this situation worse[8]. In fact, looking at predictions for the year 2030, when temperatures are expected to increase by 1.2°C-2.4°C, yields of basic grains such as corn, beans, and rice are generally expected to decrease[8]. Overall, climate change paired with a fast-growing population will work to offset many of the gains made in agricultural production in recent years. 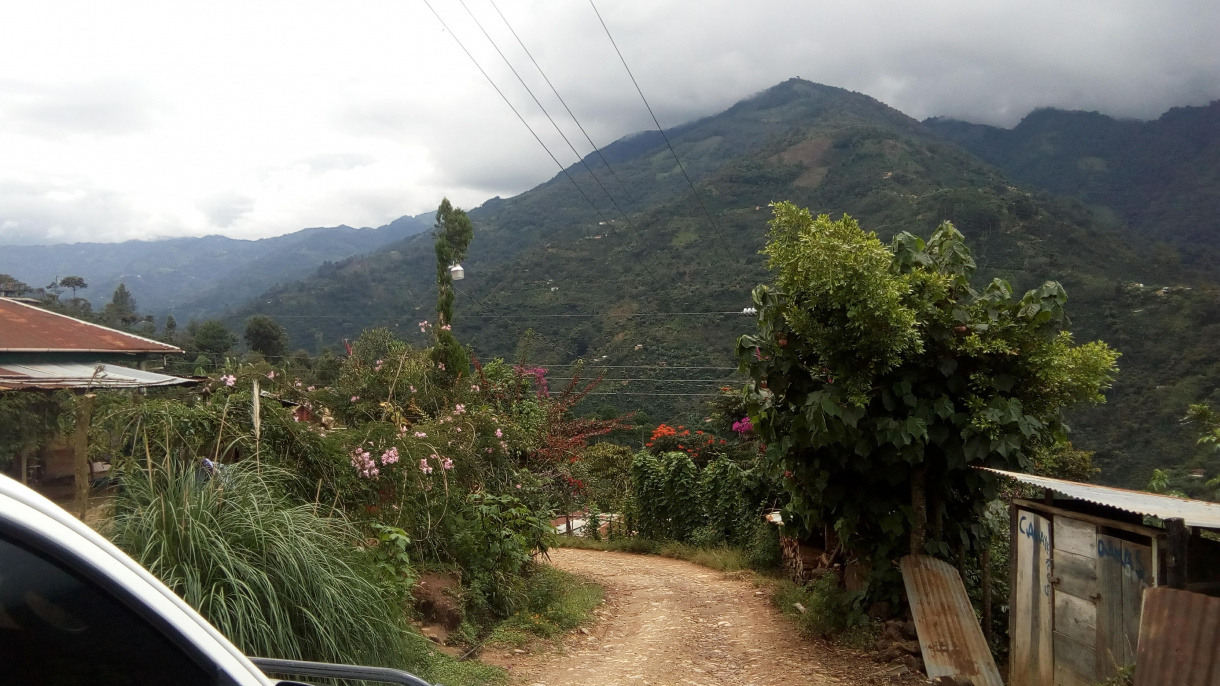 On the road in Huehuetenango. Photo: Brandon Hugueley

Compounding the effects of a high Total Fertility Rate is the fact that many of these births happen in rapid succession, in contradiction to the World Health Organization’s recommendation that births be spaced by at least 24 months. Within Huehuetenango, a full 20.0% of births occur within this 24-month window. This number jumps to 51.6% for mothers under the age of 20[1]. Short birth intervals are associated with increased risk of infants being born preterm, small-for-gestational age, and with low birthweight, all of which are associated with key indicators of childhood undernutrition, including wasting, stunting, anemia, and being underweight[7].

Young motherhood is also pervasive in Guatemala, with 22.4% of women aged 20-49 years reporting that they had their first child before age 18 and 43.0% reporting that they had their first child before age 20[1]. While it appears that the age at first birth is slowly increasing generation by generation, a full 16.2% of women aged 15-19 years old already report being mothers[1]. This is a problem for a number of reasons, not least of which is the fact that children born to young mothers (<20 yrs.) are more likely to be born with low birthweight, preterm, to be stunted at 2 years of age, and are less likely to complete secondary school[10]. Additionally, younger mothers have elevated risks for early neonatal, infant, child, and under-five mortality[11].

Looking closely at exactly how family planning, or the lack thereof, can impact nutritional outcomes for individuals and families, it appears that among pregnancies ending in a live birth, mothers who report that their pregnancy is either mistimed (not intended at that time) or unwanted (not desired at any time) are significantly more likely to have a child be born with low birthweight or preterm, and to breastfeed for a shorter duration[9,11,12]. 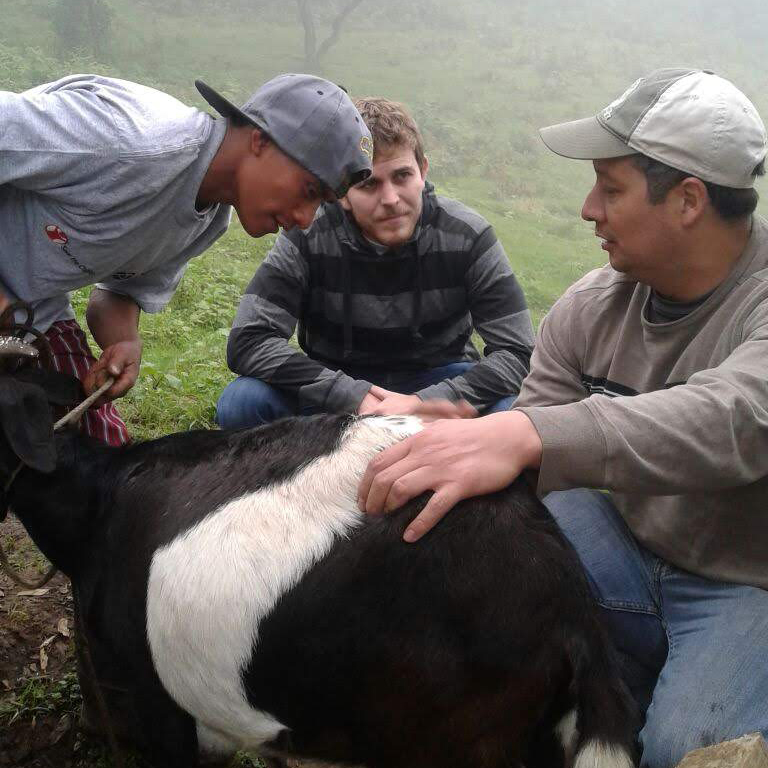 “A positive change in one area can potentially have a positive impact on a multitude of other areas.”

At first glance, this combination of factors may paint a grim future for the state of food security in Guatemala. However, within these challenges lie opportunity. Specifically, interventions targeting voluntary family planning have the potential to decrease the Population Growth Rate and the Total Fertility Rate, and ensure that women have the ability and the right to choose if and when they want to begin motherhood, as well as the number and spacing of their children. Ultimately, family planning interventions can have significant impacts on the state of food security in Guatemala and positively impact the health of individuals, families, and communities. In fact, in a Technical Guidance Brief issued by USAID regarding their 2014-2025 multi-sectoral nutrition strategy, USAID stated that “voluntary family planning is an important nutrition-sensitive intervention” and one “that is often overlooked in nutrition and food security programming but has been prioritized in the USAID nutrition strategy”[7]. USAID also stated that “although there is widespread acknowledgement of the relationship between population growth and food security and nutrition, the links between family planning and food security and nutrition have not yet been adequately reflected in policy and programming decisions”[7]. Despite this acknowledgement of the important role voluntary family planning interventions play in ensuring food security, development organizations and policy-makers continue to neglect this important topic.

It is this neglect of the important role family planning plays within food security that led me to focus my research within this topic area. While my research is still ongoing, impact from my work can already be seen through a greater awareness of the important role family planning plays within food security among my supervisors and coworkers at Project Concern International. My greater hope is that upon conclusion of my research, this higher level of awareness can be translated into a more comprehensive approach to reduce food insecurity and malnutrition within Huehuetenango and Guatemala more broadly. Of course, in order for PCI to be able to integrate family planning into their nutrition and food security programming, donor agencies must be willing to fund such work. With that in mind, I look forward to continuing my advocacy for integrating family planning interventions within food security efforts as I transition into the policy year of the Mickey Leland International Hunger fellowship in Washington D.C.

Throughout the course of my field placement in Guatemala, one of the biggest personal takeaways for me has been how beautifully complex development work is, with there being an almost infinite number of interactions between one topic area and another. While this means that problems are almost always multi-faceted and have no singular solution, it also means that a positive change in one area can potentially have a positive impact on a multitude of other areas. In the case of family planning, the ability to choose the number and spacing of children can also lead the way to improvements in women’s status and empowerment, increasing women’s available time to participate in the labor force, stay in school and attain higher levels of education, and participate in community and political activities[13]. These actions also facilitate a woman’s ability to increase income, provide nutritious foods and basic services for her family, and improve healthcare-seeking behaviors for herself and her children[13]. As such, advances in voluntary family planning will not impact food security alone, but can also empower women and ensure that the course of their lives is not dictated by the inability to decide for themselves when they want to begin motherhood.