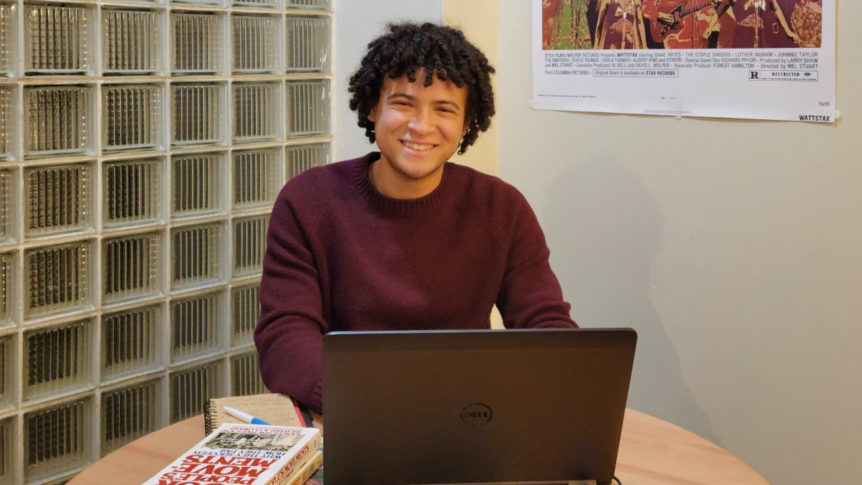 In my Urban Studies and Public Policy classes at Rhodes College, we discussed topics that were important to me, such as systemic racism, food insecurity, and gentrification for the upper-class. However, my introduction to these topics came before I even stepped into the classroom. Growing up in a neighborhood left behind in the quickly developing city of Memphis, Tennessee, my lived experiences sparked my passion for researching social policy and building connections with others committed to justice. And it was this passion that led me to the Emerson National Hunger Fellowship.

Congresswoman Ayanna Pressley says: “Those closest to the pain should be closest to the power.” For my policy placement I am working with the policy team at the Kairos Center for Religions, Rights, and Social Justice. Kairos is the center for movement strategy, coordination, and education for the Poor People’s Campaign, A National Call for Moral Revival, led by Rev. Dr. William J. Barber and Rev. Dr. Liz Theoharis. Centering grassroots organizers and people with lived experiences of poverty and hunger is the crux of our work. We are committed to building a moral fusion movement: every human being possesses immense worth and has the right to a comfortable standard of living, clean water, nutritious food, and housing. No one is excluded from our movement, and we are fighting for the rights of all. It is this moral fusion movement that aligns deeply with my own core values and makes my work with Kairos so meaningful to me.

The Poor People’s Campaign has a few mantras, one being “Everybody in, nobody out.” I learned in my first weeks the high level of analysis we use to assess policy and make sure no one is left out. Around the same time as my onboarding, the American Rescue Plan passed in the U.S. Senate. Some of my first responsibilities at Kairos were to attend internal policy calls discussing President Biden’s plan. This piece of legislation is historic in size and scope: $1.9 trillion in total with direct cash payments to millions of people, targeted assistance to Black farmers and small businesses, and increased funding for food and nutrition programs like the Supplemental Nutrition Assistance Program (SNAP) and Pandemic-Electronic Benefits Transfer. One piece of the legislation hailed as revolutionary is the Child Tax Credit. The common talking point around this policy is the Child Tax Credit will lift nearly 50% of poor children out of poverty in America. While The Poor People’s Campaign celebrates the aid going to Americans from this plan, it is careful to note how it comes up short in many places, including this misleading statistic about cutting child poverty in half. What actually happens is the Child Tax Credit has the potential to lift nearly 50% of children above the poverty line; however, the poverty line is itself an outdated measure birthed from a 1960s thrifty food spending budget that has not been updated to take into account the exponentially rising cost of living1. A family floating right above the poverty line but still struggling to make ends meet and put food on the table, is not good enough. That is not what “everybody in, and nobody out” means. I will carry this level of analysis throughout the rest of my policy placement and beyond.

One project that I am collaborating on is a research inquiry looking into food access and food security nationwide. The purpose is to bring attention to stories around the country of food insecurity and to challenge the narrative that we do not have the resources to end hunger, despite our nation’s abundance. I arrived at Kairos during the initial stages of this project, helping interview and transcribe conversations with activists and organizers around the country involved in anti-hunger grassroots campaigns. We’re asking them to share with us what the fight to end hunger looks like in their communities, and how the persistence of hunger connects to the Poor People’s Campaign’s analysis of the five interlocking injustices of systemic racism, systemic poverty, ecological devastation, the war economy, and distorted and misguided religious nationalism. These grassroots organizers have the best perspectives on the problems in their communities and their solutions.

It was pleasantly surprised to see my boss from my field placement with the Pittsburgh Food Policy Council (PFPC) on our list of contacts. She discussed the development of the Greater Pittsburgh Food Action Plan, a policy roadmap with recommendations to improve the food system in the Pittsburgh area. Last fall while at the PFPC, I created informational materials and contributed during implementation brainstorming sessions for that same food action plan. We interviewed a representative at NC Raise Up’s food distribution program, Fed Up, and they explained how they prepare bags with groceries, Personal Protective Equipment, political literature, and invitations to share their story and get more involved with NC Raise Up. Sometimes they set up their distribution hubs outside of grocery stores. Some grocery store employees don’t have enough money to purchase food, despite being labelled as “essential workers” during the pandemic. Our intention is to take the testimonies we’ve recorded, combined with our own research, to make brief reports on the state of food access and public policy solutions that will directly address the need we are finding from our interviews.

Despite work being completely virtual due to the pandemic, some of the most rewarding parts of the fellowship have been the genuine relationships I’ve built throughout my time as an Emerson Fellow. My Kairos supervisors Shailly and Noam check in with me regularly, making sure I have meaningful work that aligns with my own interests. I feel so privileged to be in a cohort with such intelligent and talented leaders. I enjoy attending virtual events and lectures that they conduct at their placements and learning from them during our trainings.

We end our weekly policy calls with another mantra: “Forward together, not one step back.” In our political environment, the mission to end poverty and hunger rolls forward with small, hard fought wins. It takes endurance and strength to speak truth to power when the system has a history of ignoring the poor and hungry. This fellowship has helped me realize my strengths, find pathways for change I can pursue, and form relationships with others committed to this mission, and I am committed to keep pushing forward, not one step back.