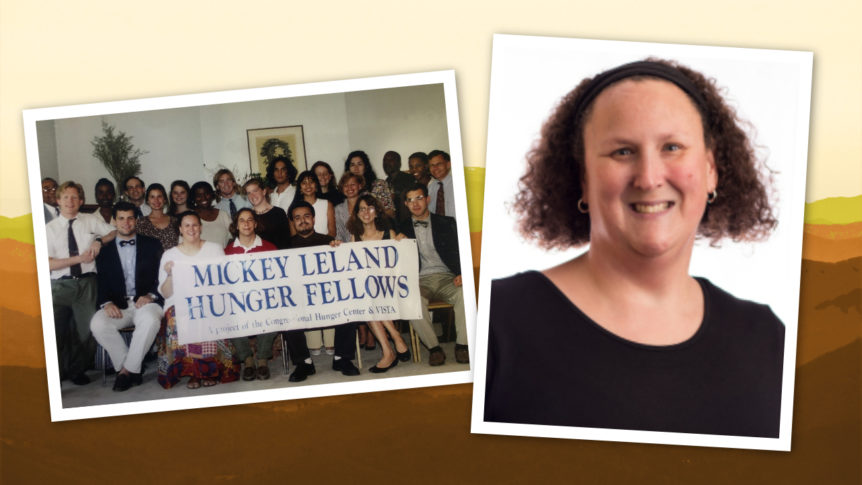 An alum from the first class of National Hunger Fellows, Dr. Melissa Zook (‘95) does not hesitate to give credit to the Congressional Hunger Center for how the fellowship experience influenced her career trajectory. Not only did her field placement bring her to the area of Kentucky where she currently resides, but the experience gave her the confidence she needed to pursue her dream of being a doctor. “It’s the whole reason that my life is what it is today,” she says. “I’m doing exactly what it is that I always thought I wanted to do, but I didn’t always believe that I could do it.” The fellowship also instilled in her a deep sense of compassion, which she says “has made a huge difference for the kind of doctor that I am.”

A strong passion for social justice and a drive to do something useful with her education led Melissa to the National Hunger Fellowship, at the time named after Rep. Mickey Leland (1944-1989). “My education is such a gift, and it’s important for me to feel like I’m using it in a way that benefits others,” she explains. Melissa was placed with the Eastern Kentucky Child Care Coalition in Berea, where her wide-ranging responsibilities included helping people with budgeting, working with local college students to create hunger awareness programs, and organizing food drives. One food drive that Melissa and her field partner started is still going on today. “I hate that it’s still needed, but I’m also glad that we left something that was enduring, which was really cool,” she says. More than anything, she began to understand the culture of rural Appalachia, the impact of hunger on the people and the region, and the power of listening. “One day a week we would go somewhere, and we would make an effort to learn more about Appalachia, the culture, the people. We would just talk to people, interview people…I think getting good at listening to what people have to say—accepting that I am not the expert, but that the people who live here know their own story the best—was a really good lesson for me.”

Now a family practice physician specializing in addiction and HIV/AIDS medicine at the London Women’s Care in London, Kentucky, Melissa has found a great deal of overlap between practicing medicine and anti-hunger work. “My patients are among the sickest and the poorest in the country,” she says, noting that food insecurity is one of the top concerns her patients share. When meeting with patients, her first question is whether they’ve eaten today—the answer too often being no. Melissa always has extra food in her office to share with patients, and has connected people who grow extra produce in their home gardens with others in need.

Though living in Kentucky has made it difficult at times to keep in touch with the Hunger Center, Melissa appreciates the support she’s received as Hunger Fellow alum. “We’re very good at patting each other on the back and lifting each other up,” she says of her cohort, “and just admiring the cool work that we’re doing, it’s been really helpful.” She also encourages newer members of the alum community to learn to embrace some level of uncertainty as they progress in their journeys. “The universe just unfolds as it should,” she says, “and you do not have to have any answers at any point in the road. You just go where the next step is, and it all magically works out. It doesn’t always work out the way you think it’s going to work out, but it just always does, it works out.”

The Power of Abundance: Engaging Youth in Political Change

The Power of Abundance: Engaging Youth in Political Change