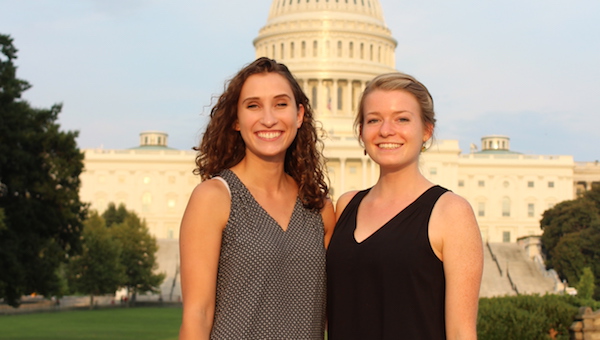 Above: Hunger Fellows Paige Shortsleeves (left) and Meg Buckley at the end of field training in August, 2017

Welcome to Field Site Spotlight, our ongoing series where current Emerson National and Leland International Hunger Fellows share what they are working on at their field placements.

Fort Pierce, Florida is home to the Treasure Coast Food Bank (TCFB), a member of the Feeding America network and first-time partner with the Emerson Program. Food Banks like TCFB play an essential part in helping people recover after disasters, as Hunger Fellows Paige and Meg discovered when Hurricane Irma made landfall in Florida mere days into their field placement. Read on to hear about the fellows’ work in disaster relief, their experience moving to a new state, and the projects they’ll be working on for the rest of the fall and early winter.

Hi everyone, my name is Paige and I am working with the Treasure Coast Food Bank in Fort Pierce, Florida. When I found out where I was placed in May, I remember feeling both extremely excited and nervous! I have lived in Maine for my entire life, so I was so excited to set out on a new adventure in the south, but I was also a little nervous about leaving behind everything that was so familiar to me. Although I’ve only been here for a few weeks now, Florida has continued to surprise me with its endless supply of things to do. Between exploring different coves and searching for alligators, my field site partner Meg and I have had quite an exciting time thus far.

While most people typically think of Disney World and beaches when they think of Florida, there are actually a lot of social issues that exist behind the picture perfect facade. On the Treasure Coast, childhood and senior food insecurity rates are among the highest in the whole state. This rural community has a hard time getting to fresh food sources, and this was further complicated by Hurricane Irma, which knocked out power for a large percentage of the region. People were without electricity for weeks, which resulted in lost food and a large need for non-perishable products and bottled water to quickly fill the gap.

As an organization, TCFB does it all! They provide over four hundred partner agencies in the region with food that can be distributed among the four counties they serve. TCFB spreads awareness around food insecurity issues to local and state government officials. They are also largely involved in disaster relief efforts. In the aftermath of Hurricane Irma, TCFB received truckloads of Meals, Ready-to-Eat (MREs) from FEMA and the Red Cross. Meg and I worked closely with the staff to organize and attend disaster relief sites across the four counties, where we passed out water, MREs, and other non-perishable items to those who lost everything and/or were still without power.

Now that things are semi-back to normal following Hurricane Irma, I have started to focus on my main project: expanding senior programming across the Treasure Coast. Florida is home to many senior citizens, but not all have the financial and material means to afford the high cost of living here. This is especially true of the rural pockets of TCFB’s service area, where grocery stores are few and far between. Accessibility is a huge issue for seniors, as transportation and simply getting around can be difficult. Currently I am forming partnerships in these rural pockets with agencies or churches that currently serve large senior populations. Once established, these partner agencies will accept food product from the food bank that is appropriate for seniors and distribute the much needed food product from a central location that is accessible to all. With five months left in my field placement, I am so excited to see where my project will take me! By the time I leave in February, I hope to have developed a network of senior partner agencies that are able to sustain themselves for the good of this vulnerable demographic.

Although I was nervous leaving my hometown, Florida has proven to be quite exciting and a refreshing change. I already feel like Fort Pierce is becoming my second home, and Meg and I have begun building networks across the four counties. We still have a lot to accomplish and learn in the next five months, but as long as we learn more from the communities we are serving, I would call our time in Florida a success! 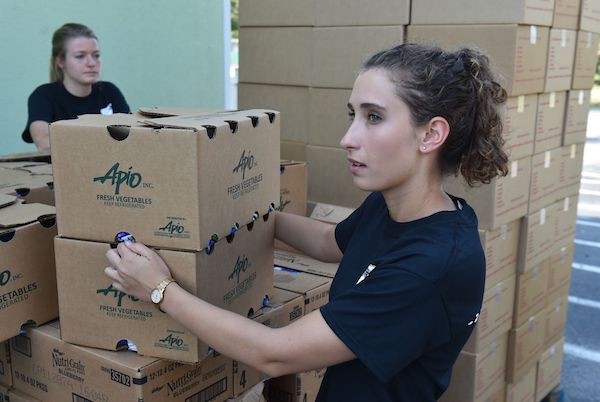 When I found out I had been placed in the Treasure Coast in Florida, the first thing I did was look it up on a map. However, Google Maps was unable to convey the culture, community, and rich experience that awaited Paige and I here. As someone who loves nature, it has been incredible for me to live in a place that has such a plethora of wildlife and beautiful stretches of prairie and wetlands that are unlike anything I have ever seen before.

I am currently working with the Treasure Coast Food Bank (TCFB), a member of the Feeding America network and the largest hunger relief organization on Florida’s Treasure Coast. The TCFB provides their 400 partner agencies across their 4-county service area with meals and other essentials. This organization is filled with dedicated employees whose energy and enthusiasm is contagious and invigorating – I feel lucky to have them as mentors and coworkers.

My initial concerns for moving here included alligators and sharks, but the weather has proven to be a greater threat. Paige and I had the interesting experience of moving to Fort Pierce just as Hurricane Irma was about to strike. I found myself traveling down the coast on my way to my placement site, listening to warnings of the impending hurricane on the radio and seriously contemplating if I should turn around.

Starting our placement site in the aftermath of Hurricane Irma provided Paige and I with the unique opportunity to learn from and participate in the Treasure Coast Food Bank’s disaster relief efforts. Disaster sites were established across the 4-county area where Meals, Ready-to-Eat, non-perishable goods, water, and tarps were given to the community. This experience has provided me with the opportunity to learn the prolonged and profound way that natural disaster impacts food security, as well as the role and necessity of community-based organizations in assisting with Disaster SNAP benefits and FEMA distributions. I’ve had the opportunity to witness the way that equity relates to disaster response and the role of disaster relief in anti-hunger and anti-poverty work. The health and economic inequities that exist within a community are further exacerbated in disaster situations – what was merely an inconvenience for some was devastating for others.

Beyond disaster relief, I am working the expand the Treasure Coast Food Bank’s partner agencies to better address hunger among children in underserved populations across the 4-county service area. I am forming partnerships with schools, churches, and agencies across the Treasure Coast to further expand the TCFB’s child programs. These including their Backpack Program, School Pantries, Teen Pantries, and Diaper Pantries. The Backpack Program distributes backpacks filled with nutritious food to children from low-income families for consumption at home, on the weekends, and holidays. School Pantries, which are an extension of the BackPack Program, are based out of schools or local aftercare programs to provide shelf-stable foods directly to students and families in need. Teen Pantries provide adolescents with the opportunity to pick out hygiene items such as body wash, deodorant, and menstrual care items. My project will also include a storytelling collection component, where I will have the opportunity to speak and engage with community members to share a collective story on the lived experience of hunger among children and families on the Treasure Coast.

I am excited to see what the upcoming months hold here. I know Paige and I have so much to learn from the community here, and I only hope we will be able to contribute to the work of the Treasure Coast Food Bank in a meaningful way. We also plan to continue to be vigilant in our search for alligators.